Douglas “Doug” Harding Mitchell will be inducted into the Canadian Football Hall of Fame on Aug. 6, 2021, in Hamilton, Ontario. Although Doug went to CC on a hockey scholarship, he ended up playing football as well. He also played with the B.C. Lions before joining the legal profession. He served as Canadian Football League commissioner from 1984-1988 and created and served as chairman of the annual BLG Awards (Lieutenant Governor Athletic Awards, formerly known as the Borden Ladner Gervais) honoring Canadian collegiate athletes. The Mitchell Bowl, which is one of the Vanier Cup semi-final contests, bears his name. In 2004, Doug was appointed to the Order of Canada and, three years later, he was inducted into the Alberta Order of Excellence.

For two years Lynne Johnson has been helping to spread joy through a weekly column called “Chasing the Light,” which is published in “Midweek” in the Honolulu Star-Advertiser. “Chasing the Light” is an interfaith collaboration; each week a guest writer submits a short first-person perspective piece. Lynne drew inspiration for this project from a daily column published in the paper by the late Rev. Paul Osumi and a spiritual column in the New Delhi Times. She appreciated how both columns provided a welcome respite from what is often somber news. Lynne is always looking for new writers for “Chasing the Light” so, if you are interested, please contact her at cometkupono@gmail.com. 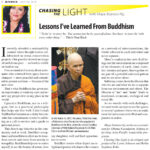 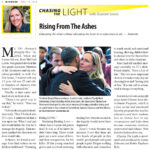 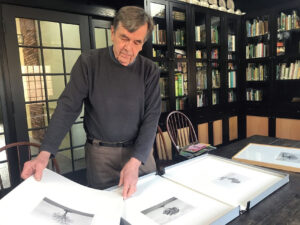 Tom in the Berkshire Botanical Garden Library selecting photos for inclusion in the exhibition. Photo by Gillian Culff.

Zetterstrom’s photographs are represented in the collections of 44 museums nationally, including the Museum of Modern Art, the Getty Museum of Art, Yale University Art Gallery, the Library of Congress,as well as numerous corporate and private collections.

“Zetterstrom’s portraits of trees partake in a tradition whose roots lie deep in 19th-century photography and painting,” writes Charles S. Moffett, former director of the Phillips Collection. “[His] images reflect moods and ideas that are at least indirectly related to British and American romantic traditions. He has both built a bridge to the past and created a body of work that fully reflects a particular late 20th-century sensibility.”

Zetterstrom is the recipient of the 2011 national Arbor Day Foundation’s Public Awareness of Trees Award for his photographic work and as a tree preservationist. In a series of talks titled “Whose Woods These Are,” Zetterstrom will describe projects that have effected positive change to protect native plants and trees in natural and in community forests. Additionally, he will give three gallery talks about the art and horticulture of black-and-white tree photography.

Jane Lubchenco was appointed deputy director for climate and the environment in the White House’s Office of Science and Technology Policy, working to find climate change solutions that will help improve the environment, economy, and health of all. Jane is a well-known marine scientist, holding posts at Oregon State University and as the head of the National Oceanic and Atmospheric Administration.

David Herbert received a Sacramento Business Journal Most Admired CEO Award. David is president and CEO of Sutter Independent Physicians, “an Independent Practice Association of over 500 of the best private practice physicians in the greater Sacramento Valley and foothills area.” Sutter offers primary care for children, adults, and families, as well as advanced specialty care. David’s expertise in infectious diseases proved critical and serendipitous to Sutter when the pandemic hit, and he enjoys bringing his ideas to the administration side of medicine.

Mark Stevens is a volunteer running coach at the San Quentin State Prison, which houses the only death row in the state of California. The program is called the San Quentin 1,000 Mile Club. Mark ran high school track and has experience coaching high school track and cross country. Mark helps train club members to complete a prison marathon by year’s end. He has also written letters in support of certain individuals suitable for parole. Mark has a local running club in the Bay Area where paroled inmates are welcome to join. He finds this work very personally rewarding.

In recognition of a lifetime of work furthering the arts, Sue Simpson Gallagher was a recipient of the 2020 Governor’s Arts Award, run by the Wyoming Arts Council. Her service as a curator and arts advocate is widely regarded throughout Wyoming and beyond.

Michelle Talarico, co-owner of the Picnic Basket Catering Collective, was named the recipient of the 2021 Athena Award, which honors businesswomen for professional excellence, community service, and mentorship of other women. It is hosted by the Colorado Springs Chamber of Commerce and Economic Development Corporation. Michelle also serves on the boards of several area groups, including the Colorado Springs Leadership Institute, the Greenberg Center for Learning and Tolerance, the Pikes Peak Hospice Foundation, Colorado Springs Conserv-atory, the Children’s Literacy Center, and Care and Share Food Bank for Southern Colorado.

Jennifer “Jeni” Arndt was elected mayor of Fort Collins, Colorado, on April 6. Jeni was previously a member of the 73rd Colorado General Assembly and served as chair of the Agriculture, Livestock, and Water and Statutory Revision committees. She also was involved with the Transportation and Local Government Committee. She won 63% of the vote, and her blowout victory was a decisive finale for an unusually competitive mayoral race. Though the race is officially nonpartisan, the results also represent a political departure for Fort Collins: The city hasn’t had a registered Democrat as mayor since the 1990s.

Lowe J. Billingsley was appointed senior vice president of operations for Argonaut Gold Inc. Previously, Lowe was the mine manager of the Stillwater East Mining Complex for Sibanye-Stillwater and also had senior leadership roles at AngloGold Ashanti.

Rev. Kristin Johnston Largen was appointed as the next president of Wartburg Theological Seminary in Dubuque, Iowa. Previously, Kristin was a professor of systematic theology at United Lutheran Seminary. She teaches in the area of systematic theology with a focus on comparative theology with Buddhism and Hinduism and works in 21st-century theology, specifically with feminist and liberation theologies. Kristin is also associate dean of religious and spiritual life and college chaplain at Gettysburg College in Gettysburg, Pennsylvania. She is editor of Dialog: A Journal of Theology, and recently published the book “A Christian Exploration of Women’s Bodies and Rebirth in Shin Buddhism” (Rowman and Littlefield).

Daniel Fellman was named new senior rabbi by Temple Sinai in Pittsburgh, Pennsylvania. Daniel has been the senior rabbi at Temple Concord in Syracuse, New York, for more than a decade. He formerly served as assistant and associate rabbi at Anshe Emeth Memorial Temple in New Brunswick, New Jersey. He serves on the board of Interfaith Works and the City/County Human Rights Commission, as well  as the board of the Jewish Federation, the Community Relations Committee of the Jewish Federation, and the University Hill Corporation in Syracuse. 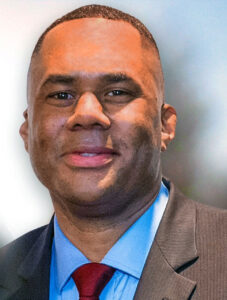 Ryan Haygood won a University of Colorado Boulder law alumni award for Distinguished Achievement — Special Recognition for Out-standing Leadership in Civil Rights. Ryan is a nationally respected civil rights lawyer and is president and CEO of the New Jersey Institute for Social Justice. Under Ryan’s leadership, the institute’s advocacy led to the historic restoration of the vote to 83,000 people on parole and probation, a right New Jersey previously denied since 1844. Ryan is a trustee of the college.

Kate Aitchison’s art was featured at the gallery at the Block Island Airport, a partnership between the Rhode Island State Council on the Arts and the Rhode Island Airport Corporation. Kate’s art focuses on print media, incorporating her handmade paper. The exhibit was on display through June 21. Kate also teaches printmaking at CC as a block visitor. 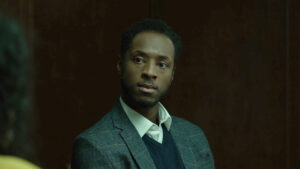 Doron JéPaul Mitchell (right) stars in the film “Testament,” a new streaming theatrical production from Brooklyn-based theatre company Via Brooklyn. “An original play with music, ‘Testament’ is a compelling re-imagining of four oft-forgotten Bible characters told through the lens and sounds of modern-day America.” The film was originally meant to be a stage production but was filmed for streaming due to COVID-19. Clips from the film can be seen on the Via Brooklyn website: viabrooklyn.org.

Amairani Alamillo earned a master’s degree in counseling and human services. Prior, she worked in Colorado College’s Butler Center for five years. Amairani will continue her passion for working with underserved communities by providing therapy services to children, individuals, and families in the foster care system, as well as juvenile sex offenders. 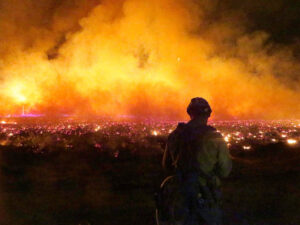 Harrison Raine wrote an article on March 22 titled “We Need to Act Now to Fight Wildfires” about the 2021 fire season in the Southwest for Writers on the Range, a nonprofit dedicated to spurring lively conversation about the West.

Along with being a recent graduate of CC, Harrison has been a hotshot crew member since 2016, fighting fires all season across the West.