When Rick Swan announced he was stepping down after 23 seasons as head coach of the Colorado College volleyball program, he never imagined his tenure would end with unparalleled perfection. 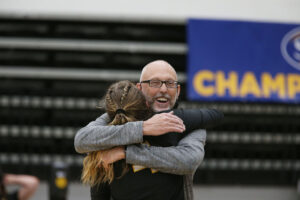 Colorado College Volleyball Head Coach Rick Swan has plenty to celebrate after guiding the Tigers to a 17-0 record in his last season. Swan stepped down after 23 seasons with the team. Photo by Charlie Lengal

In his last season, Swan guided the Tigers to a 17-0 record, their third Southern Collegiate Athletic Conference championship in the past four years, and the No. 1 ranking in the final American Volleyball Coaches Association’s Division III Top-25 Coaches Poll.

Each of those accomplishments was made possible by dominating all three matches against arch-rival Trinity University, including the 22-25, 25-21, 30-28, 25-19 victory in the SCAC championship game.

With that win, Swan improved to 596-175 at Colorado College and 629-215 overall, which included two seasons at Webster University in St. Louis. His victory total and .773 winning percentage both are program records.

In addition to guiding the Tigers to six SCAC championships since they joined the conference in 2007, Swan led CC to a 177-23 record and a .885 winning percentage in league matches, which was the highest among all SCAC head coaches. He also posted an 18-15 all-time mark against Trinity, which includes a 4-1 record in championship matches of the conference tournament.

In 2009, Swan guided Colorado College to a 35-5 mark and a berth in the quarterfinals of the NCAA Tournament, where the Tigers fell to eventual national champion Washington University in four sets. CC finished that season ranked No. 7 in the final AVCA Division III Coaches Top 25 Poll — one of six times the Tigers finished a year in the Top 10.

Since then, Colorado College won 30 or more matches nine times and extended its streak of NCAA tournament appearances to 22 seasons.

In 2017, The Tigers earned the program’s first No. 1 ranking and finished the campaign with a 33-2 record, setting a program single-season record with a .943 winning percentage. During the regular season, CC posted a 7-0 mark against nationally ranked opponents, including a sweep of Calvin College for the program’s first-ever victory over an opponent ranked No. 1 at the time of the match.

The Tigers also have been regular recipients of SCAC recognitions, claiming 32 first-team honors and 19 second-team selections. During that time, Colorado College won all five of the conference’s major awards, including Swan being chosen Coach of the Year six times by his peers.

This past season, CC’s list of award winners included junior middle hitter Georgia Mullins ’22, who was voted the Player of the Year in a ballot of the conference’s head coaches. The three other recipients were senior Isabelle Aragon-Menzel ’21, the inaugural Setter of the Year, and outside hitter Isabella Lipacis ’24, the Freshman of the Year.

Swan also established a tradition of academic excellence within the program. During his tenure, Colorado College earned the AVCA Team Academic Award 15 times, including each of the past eight years. With 17 total awards, CC is tied for 14th all-time in Division III and ranks first in the SCAC.