Grinning amidst his work, a regular sight.

Professor Emeritus of English Dan Tynan is, to many, the ultimate liberal arts professor. Retiring from full-time teaching in the fall of 2016, Tynan’s lighthearted classroom environments are often filled with as much music and song as they are deep and serious scholarship. They offer the perfect window into the life and teaching career of a man who fully embraces the expressiveness in learning that a Colorado College liberal arts experience allows.

Born in Yonkers, New York, in 1944, Tynan remained in the five boroughs of New York City during his undergraduate years at Fordham University, where he finished in 1966 with his B.A. in English. Seeking a change of place, Tynan pursued and received both his M.A. and Ph.D. in English in the Midwest, from the University of Wisconsin-Madison, in 1967 and 1971 respectively. While he was still completing the final year of his Ph.D., Tynan arrived at Colorado College as an Instructor of English in the fall of 1970, welcomed to a campus alive with political energy and academic upheaval.

Tynan’s teaching and scholarship focused on American literature across the 19th and 20th centuries. Over a 46-year career at the college, his work in and out of the classrooms as a teacher, scholar, and community member wove its way into the fabric of CC.

Quickly moving through the ranks of assistant professor and and associate professor, with tenure arriving in the fall of 1976, Tynan quickly made himself an indispensable member of the Department of English. A fellow at the Newberry Library in 1974, 1975, 1976, 1978, 1979, 1982, and 1983, he taught a springtime short-term seminar in Chicago in 1974, titled “Studies in Melville and Hawthorne” — bringing together two authors and their works, works that he has studied deeply and taught numerous times over the years at CC.

As ever, an enthralled audience listens to Tynan.

Tynan in full flight, amidst mountains and canine classmates!

In 1991, Tynan was the first to hold the National Endowment for the Humanities Distinguished Teaching Professor role at Colorado College, as part of a National Endowment for the Humanities grant campaign. As one of 14 schools selected across the country, CC received the NEH grant of $250,000 — which the college matched at a ratio of 3:1 — which brought the total endowment to $1 million in support of faculty salaries, seminars, and scholastic engagement and activities. The professorship role for the NEH grant at CC rotated every three years, and leading the way was Tynan, keen to “explore even more fully the place of the humanities within the curriculum and within today’s unsettled intellectual atmosphere.”

A scholar in the service of his teaching, Tynan’s focus on the literature of the United States allowed him a unique focus for his department and the generations of students he taught.

American literature, fresher and younger than many of its more canonical or classic literary fellows, chronicles journey stories and narratives — personal, social, political, and emotional. For college-aged students, these stories and narratives enter their lives at a crucial moment — when they are on the cusp, pushing every boundary, testing every water. Tynan, in facilitating that discovery of the self through literary exploration, supported thousands of young persons in becoming who they were meant to be.

“When I taught Ulysses, many moons ago,” Tynan proffers, “the class did a marathon reading of the novel. It took us 24 hours – quite a task for me as a professor, let alone the students! It was wearisome, but great fun and incredibly memorable…in fact, not long ago I ran into two alumni members of that course who claimed that it was the greatest thing I ever did!”

One such alumnus would be Craig Werner ’73, now the Evjue-Bascom Professor of Afro-American Studies at the University of Wisconsin-Madison.

“It was a Joyce/Faulkner seminar and it filled up so quickly that they decided to add a second section to the class, assigning it to the incoming assistant professor — CC’s own, Dan Tynan. It was in one of the dorm lounges, most of us sat on couches. In walks Dan, on day one, and says ‘Hi, I’m Dan Tynan and I just got my Ph.D. in English from the University of Wisconsin-Madison and if I had it to do over again I would have gone into the Army and gone to Vietnam because it would have been less dehumanizing!’ It was a hell of an opening, but it stuck with me because what I took from every class Dan ever taught was the profound importance of seeing every student as a human being just as complex, curious, and funky as any teacher or professor.”

“Over the years, I probably took six or seven classes with Dan — every chance I had, I took it. I could list the dozens of books he transformed for me, the class discussions that’ve shaped the way I’ve taught down the years. My own scholarly career has been built around taking Aretha Franklin and Bob Dylan as seriously as Joyce and Faulkner — I learned that from Dan, and his amazing music collection.”

Over the years of teaching and scholarship, Tynan has constantly sought to emphasize a diversity of literature in all of his classes. English professors at CC have a duty to select texts that are representative of cultural inclusivity and expression, and Tynan is incredibly aware of his responsibility.

Many of his syllabi do contain lynchpins of the canon such as Herman Melville, Nathaniel Hawthorne, James Joyce, Virginia Woolf, D.H. Laurence, and William Faulkner, however, these are often presented through the lens of historical and cultural groundings for more modern and varied authors to shine like Thomas Pynchon, Toni Morrison, and Alfredo Vega Jr.

“It’s partially my training, partially my personal taste, and partially the Block Plan,” he says, “I really don’t like to teach books I don’t like, and I really like these texts!”

This variety of teaching feeds into Tynan’s scholarship, as well.

“I have always put the service of teaching at the top of my list here at CC,” Tynan says. “That said, I have done and continue to research and the outcomes of that research, I hope, supports my course work.”

Among his papers, articles, and edited books are ones on Irish-American fiction and their societal diaspora, numerous studies of Melville’s “Moby-Dick,” and a biographic dictionary of contemporary Catholic authors in America, as well as his time giving lectures and serving on panels on everything from Ralph Waldo Emerson and James Joyce to Irish terrorism and war fiction. 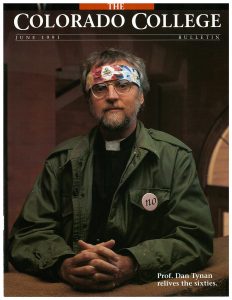 At CC, Tynan has developed a catalog of interdisciplinary courses as what he describes as a “great liberal arts exercise.”  These include courses taught with Professor Emeritus of History William “Bill” Hochman, “War, Violence, and Human Value,” as well as courses as far afield as biology, with Visiting Associate Professor Boyce Drummond, titled “Literature of the Environmental Imagination,” which later morphed into “Nature and Science.”

Another alumnus who can speak to the versatility of Tynan’s teaching, and proffer some fond collegiate recollections and recent stories is Jeff Keller ’91, an English major and former student of Tynan’s who now sits on CC’s Board of Trustees.

“I first heard about Dan via reputation, and then I took a class with him. You couldn’t be a CC English major and not study with Dan,” he says.

“Dan engaged all of us as adults. We had great conversations and he pushed us to really understand an issue and then discuss, debate, defend it with real passion and energy. That is so important.”

As vital as the in-class connections formed between professor and student, material and reader, are those connections that continue long after the book is closed and the grades submitted. Keeping those connections alive, as colleagues and friends in later years, is a hallmark of teaching and forming community on the Block Plan at a liberal arts college like CC.

“Dan and I hatched a plan to have him teach ‘Moby-Dick’ on Nantucket to a small group of CC folks,” mentions Keller.

“It finally happened in the fall of 2016, and it was fantastic! We had a great group of engaged students and spent all morning with Dan and Melville in a great old historic building on Nantucket. We then all went to sea for a few hours on a restored Privateer and visited the Whaling Museum to complete the experience. Epic!”

Nancy Ekberg ’74, a member of the Department of Music studio faculty and current director of the Collegium Musicum and recorder instructor, met Tynan through her sister, who knew that Tynan played guitar and sang Irish songs at parties and events around the city. They have been together, first in music and later in marriage, since they first met, in 1974. They share a love of folk music — Irish and Scottish in particular — that has resonated across their years at CC and in Colorado Springs.

Tynan retired from full-time teaching at the end of the 2016-17 academic year, but still teaches the occasional block at CC. Upon retiring, Tynan confided in the CC Bulletin that, “I want to hike more trails, I want to build my birding life-list, I want to travel the required number of retiree miles, and I want to read more of whatever I feel like reading,” he said.

“I may also teach a course or two along the way, should the opportunity arise. Finally, on certain days, I may wake up and choose the do-nothing option.”