Riker leads discussion with his usual engaged vigor, just as he has done for five decades.

This year, Colorado College’s John Hanwell Riker, professor of philosophy, is celebrating 50 years of teaching at the college. A special celebration was held at this year’s Homecoming. Riker gave a talk on his recent scholarship entitled, “Philosophy and Psychoanalysis: Re-vitalizing Contemporary Life.”  The Philosophy Department surprised him by telling John that his lecture was the inaugural “John Hanwell Riker” lecture, a lecture that will be given each year in honor of John’s service to the department. The next day there was a celebratory event with with colleague professor Jonathan Lee  interviewing John and inviting past students and colleagues to speak.  Afterwards there was a sumptuous reception.

Riker shows no signs of slowing down, despite being 10 years past retirement age, and reflects that a career spent teaching at CC is “the most exciting space of any college I’ve spent time at, so alive and engaging. It’s too wonderful to voluntarily give up. You’re going to have to drag me away from this.”

Riker arrived at Colorado College in 1968, and became in time a prolific scholar — publishing books and articles, and giving talks across the country and around the world on ethics, American philosophy, and “what it means to be human,” he says. The next adventure, alongside wife, dance partner, and fellow professor Marcia Dobson of the Department of Classics, takes them both to Vienna, Austria, where both are giving papers  and the couple is going on a cruise up the Danube through central Europe.

Reflecting on how he came to CC, Riker remembers that “professor Darnell Rucker, who taught at CC from 1956-1968, decided to leave for Skidmore College, and a position opened up in the department and I applied.”

“As luck would have it, I’d taken a summer course at CC in 1966, with philosophy professor and then-department chair Jane Cauvel. I’d fallen in love with Colorado and CC immediately, so once the offer came from Colorado College two years later, everything else fell off the table; I was coming here,” Riker says.

Born in 1943 in New Jersey, Riker’s formative years were spent in a “small, boutique town outside of New York City, which was assured it was the best place in the world!” Just as Riker was heading into high school, his father took a CEO position in Canada’s second-largest city, Montreal.

“I couldn’t go to school in Montreal, very sadly. I didn’t have 10 years of French language skill. So, instead, while my father’s work took him north, my schooling took me to the Mount Hermon School in Massachusetts,” says Riker.

Moving to Mount Hermon, a preparatory and (at the time) single-sex school, was not positive for Riker, who “arrived as a junior, an outsider,” he remembers. “I just hated it. I fell into a deep depression, and was very socially isolated. I shut down socially, but that’s how I found academics. Before, I’d been a rock ’n roller, living a surface-level existence. Once I found academics, my life changed forever,” says Riker.

Riker first immersed himself in English literature, reading and picking apart the great works, and eventually found himself drawn to studying philosophy, at Vermont’s Middlebury College. The whole department had only two professors, something that both shocked and motivated Riker.

“Most of my undergraduate degree was essentially self-taught,” Riker says. “Both professors from the department had huge personal issues which they brought into the classroom, so my thinking was that with professors like this I had no doubt that the field needed me!”

Riker graduated from Middlebury in 1965, with his B.A. in philosophy. He was the class valedictorian, a member of Phi Beta Kappa with High Honors in his field. From Vermont, Riker went south to Vanderbilt University in Nashville, Tennessee, to pursue his Master’s and Ph.D.

“The department at Vanderbilt was fabulous, but the heat and humidity in Nashville was not! I had to sit in an ice-filled bathtub until the weather cooled down enough in October.” recalls Riker.

“Because I was mostly self-taught at Middlebury, I took my preliminary exams earlier than most people do during their Ph.D. program. I just felt confident in my abilities, and happily it went well. I finished both my MA and Ph.D. in three years.

Riker moved to Colorado in the summer of 1968, and began teaching that fall as an assistant professor.

Part of the faculty body which helped create, cultivate, and grow the Block Plan, Riker recalls arriving at a CC on the semester plan — teaching three courses a semester before the change of structure. When the Block Plan arrived, it changed everything.

“It was framed to us faculty as ‘how do we want to teach?’” explains Riker. “That very act of choosing rather than simply accepting the tried and true of what had come before, it put so much energy and vitality into this place, you could live off it!”

In the formative decade of the Block Plan, faculty taught nine blocks a year — “I loved it!” Riker says. The eight blocks we know today came later, but the launching decade of the new plan began a new way of doing things, with originality, both for CC and for Riker.

“The Block Plan was really the launch of CC becoming a truly interdisciplinary college, and it changed the very nature of teaching in higher education. My class with (classics professor) Owen Cramer, Greek Philosophy and History, for example, has been taught now for over 35 years — it’s incredible.”

Riker’s time at CC has been one of scholarship, teaching, and engaged service. A member of the general education committee, Watson Fellowship nominating committee, and the director of the ACM Newberry Library Program between 1979-1980, Riker has worked across CC’s campus, and across the national and international academic communities. He was the chair of the Department of Philosophy three times, between 1978-1993, 2008-2010, and 2013-2014; the Judson Bemis Distinguished Professor of the Humanities between 2003-2006; and the Kohut Distinguished Professor for the Committee on Social Thought at the University of Chicago from 2003-2004. He has been a visiting professor at both Emory College and the University of Chicago, as well.

Over all this time, however, one thing that has remained a constant to Riker is the engaged, interested, and relentlessly curious nature of the students that CC attracts. It’s what keeps him returning to the classroom, time and time again.

“CC students have always been willing to engage with ideas, to see ideas as something to think about as both personal and existentially meaningful — that’s what’s definitive and distinctive about CC philosophy students.”

People who’ve been in jobs for years and years may often stagnate, or find their work less exciting than they once did. Not so, for Riker, whose journey of scholarship has only sped up, grown deeper and more profound, over his years at CC.

“I published almost nothing in my first quarter century at CC; however, since 1992, , I’ve published four books, 15 or more articles, and I give two to three papers around the country and the world each year.”

“I finally got ahold of a set of ideas I believed in. It took me time to grasp what I needed to say as a philosopher, rather than going article to article on what someone else had already thought. I wanted to find my own voice,” Riker explains.

With those ideas came success in and beyond the classroom.

Beyond his scholarship and teaching successes, Riker’s life has been buoyed and lifted by another form of creative, immersive expression – dance. 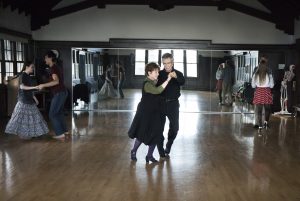 Marcia Dobson and J.L. Riker teach a ballroom dancing class in Cossett Hall that is open to students and staff alike. The class focuses on dance techniques for various dance styles. Soren Kodak and Greta Wu follow along with classmates Joel Frykholm and Haley Kolgate (right).

“When I was 8 or 9, I was made to go to cotillion, and in junior high we did a lot of swing dancing,” he says.

“Rock and roll had just come out, so we rocked and rolled our way through high school and college, but my dancing life changed — once again — when I came to Colorado.”

“The Greek history and philosophy class had parties, at Bill Hochman’s house. Marcia and I put on music and just danced, it was great,” Riker says.

Professor of Classics Marcia Dobson and Riker met as they were co-teaching that same class.

“We discovered that we both loved to dance, and that we liked our bodies being together in dance,” Riker says. “For our second wedding anniversary, Marcia gave us a present of dance lessons, and we’ve been dancing together ever since.”

For nearly two decades, the husband-and-wife duo have been teaching ballroom dance to CC students and community members, with official adjunct classes being held for the past three years.

“We just decided to involve young people in ballroom dance,” Riker says. “Something we both loved, Marcia and I, and we wanted to share with others.” 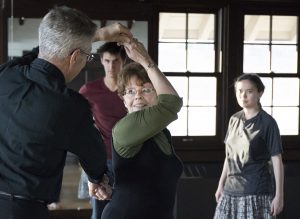 Marcia Dobson and J.L. Riker teach a ballroom dancing class in Cossett Hall that is open to students and staff alike. The class focuses on dance techniques for various dance styles. Soren Kodak and Greta Wu watch a technique being demonstrated.

Sharing with others, from philosophy to dance, is a hallmark of Riker’s life. Regarding this year’s Homecoming celebration, Riker says he is “certainly forward to seeing my students and colleagues, old and new, to Jonathan Lee who is MC-ing the Q&A, but ultimately I want to get it over with so I can get back to teaching!” he says.

“It really doesn’t feel like 50 years of teaching, at all,” he adds. “I’m not going anywhere, anytime soon.”

One Response to Professor John Riker