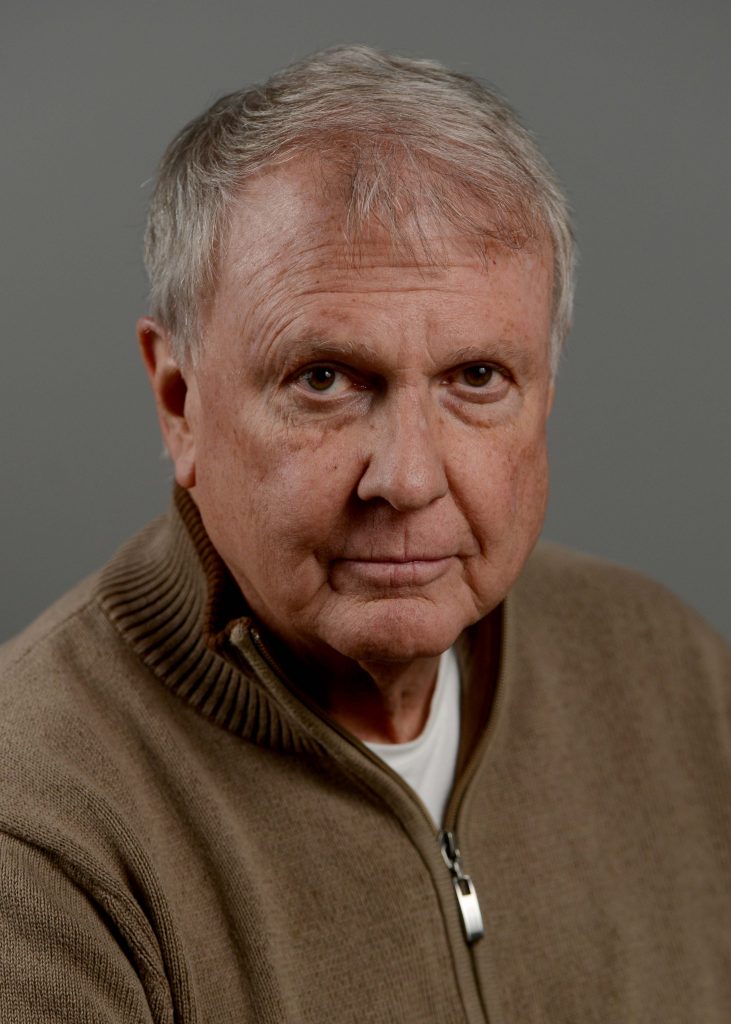 In early May, at Stewart House, beneath a glorious Colorado springtime sky, a gathering of Colorado College colleagues, friends, and former students met to celebrate Professor John Simons of the Department of English.

Simons, who retired from full-time teaching at the end of this academic year, has been a pillar of his department and of the college community since his arrival on campus in 1971.

“I arrived at CC age 27, newly married to my wife Frear and freshly out of the University of Chicago,” Simons says. “We taught nine blocks a year, then, with no blocks off, so it wasn’t as much wading into the deep end as it was plunging headfirst into the deepest Pacific!”

“I was ambitious in my teaching,” he explains. “I team-taught courses for years, and have continued to do so, because so many of our faculty here at CC have crossover and varied interests to mine – it’s a real joy.”

A son of the Upper Midwest who grew up on the shores of Lake Michigan, in the small river town of Allegan, Michigan, Simons’ home was like so many of that era – not poor, not wealthy – somewhere in that oft-forgotten middle band of middle class families in the post-war era. Books lined the shelves, so it’s only natural that a love of reading, of words, should spring from a childhood spent lost in stories and in cinema.

“Balzac, Joyce, Hemingway, and my father’s favorite, John O’Hara — they were always on the shelves,” he says. “Joyce was too daunting, but I remember devouring Hemingway’s short stories, especially the Michigan tales.”

“I went to the movies alone, and often,” Simons recalls. “The local venue had 25¢ screenings, so I saw all the classic Westerns as a kid. I fell in love with these loners, these isolatos, these rough and tough lawmen. Randolph Scott was a particular favorite, that classic tall-in-the-saddle hero, laconic and more stoic than Gary Cooper, his life full of dark and painful secrets.”

“As a kid, I couldn’t articulate these thoughts, but I certainly felt them,” Simons adds.

“We shared a house with my grandparents, something quite common at the time,” he says. “I have two sisters, one of whom was a finalist for the title of Harvest Queen at the local county fair.  And my mother won a car raffle at the 1959 fair, a white Impala with a bright red interior!”

“I was a shy kid, particularly before I went to college. But shy kids read a lot, and I did,” he says. “I think that’s where a lot of my drive comes from,” he adds. 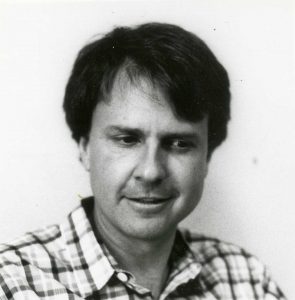 In a quiet moment, Simons reflects.

Following his sister, Simons’ drive took him to Hope College, in downtown Holland, Michigan, just 30 miles from home and a few miles from the lake. Competing in long jump and basketball for Hope, Simons was a political science major until the final semester of his undergraduate career. In the fall of 1965, he went to Washington, D.C. for the Washington Semester Program at American University, only a few years after the tragic assassination of President John F. Kennedy. It was a unique time to be in the nation’s capital, “lugubrious” and filled with “new rage” every day.

While at Hope, studying government, Simons learned quickly that he could not deny his literary leanings and a burgeoning passion for classic films. The Georgetown cinema, which Simons frequented in D.C., rekindled his love for literature and film, and he switched his major to English during his final semester at Hope. He hasn’t looked back since.

From Hope, he moved down and around the lake to the city, the University of Chicago, where his M.A. and Ph.D. research focused on modern poetry, fiction, and film, and where he met his wife of 48 years, Frear Steeter Simons. A lifelong lover — now scholar — of classic Westerns and crime films, Simons published his first article on the Raoul Walsh masterpiece, “High Sierra,” starring screen giants Ida Lupino and Humphrey Bogart in what would be Bogart’s breakthrough film.

Arriving in Colorado Springs in 1970 for his interview, Simons immediately impressed with the breadth of his knowledge and the quiet fire he brought to his desire to teach. Starting at the college in the fall of 1971, the year after the Block Plan was introduced, as an instructor in English, he “hit the ground running, and stumbling, then running again, like all starting teachers.”

“The intensity of teaching under the Block Plan contrasted strikingly with the generation of students I encountered,” he remembers. “The so called ‘flower child’ generation. They’re so misrepresented with that moniker. They weren’t layabouts or lazy. They were incredibly bright, but far less career focused than students are now. I think that attitude, of learning for the sake of learning, helped us as faculty get to know our students better.”

Film entered his teaching in the latter 1970s, as Simons first taught a Novel into Film class, then expanded into Westerns. The film program at CC was “new and small then,” he recalls, and was led by Professor Emerita Marcelle Rabbin of the Department of Romance Languages.

“We used 16mm rolls of film, it was cumbersome technology,” he says. “Only years later did we have video tapes, DVDs, and now Blu-Ray and digital video.”

“I was a typically nervous teacher at the beginning, for sure,” Simons admits. “I stuck too close to the text, was overly diligent with my readings. Now, thankfully, I can generalize more, allow the text to ‘breathe’ more for the students.”

That textual breathing Simons speaks to is evident across the years of his teaching, but perhaps no more perceptible than in his famous, long-running class on James Joyce’s masterwork, “Ulysses.” The course is everything that’s good about our Block Plan, affording students the time and space to dive deep into the work and world of the great modernist author. On the first day of class — for example — the students and Simons cover the first page of the novel, just that. Simons, who’s taught the course for decades, enters the room with his well-worn copy, Post-It notes protruding from every possible page. For the student, it’s an enthralling, breathtaking experience, a mantle now borne by his department colleague, and team-teacher of recent years, English Professor David Mason. It’s one of the most remarkable experience any student can have at CC, and for those who’ve been in the room, along for that ride, it lingers long in the memory.

As his career developed, Simons found himself branching beyond the classroom, into mentoring, writing, and scholarship.

“I took the intensity of my teaching and put it into my scholarship,” he says.

In 1972 and 1984, Simons won Ford Foundation grants and Benezet Summer Research stipends, furthering his research into film and the literature of film.

Channeling his love of Westerns into his research and writing, Simons is the co-author of the 2011 book, “Peckinpah’s Tragic Westerns,” along with his former University of Chicago colleague Robert Merrill. The book covers classic Westerns including “Ride the High Country,” “Pat Garrett & Billy the Kid,” and Sam Peckinpah’s masterpiece “The Wild Bunch,” and examines the filmmaker’s art in the greater context of 2,000 years of Western tragedy.

His writing and scholarship has remained varied and versatile, with articles and conference papers ranging from wilderness in the work of William Carlos Williams to unpacking nightmares in Joseph Heller’s “Catch-22.” Commenting on film is ever-present in Simons’ scholarship, as he has co-published recent essays on Clint Eastwood’s “Mystic River” and Billy Wilder’s “Double Indemnity.” 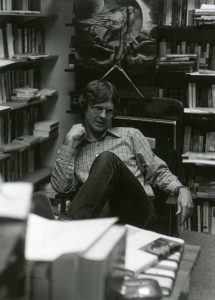 On campus, he remained instrumental in shaping the Department of English throughout the years, co-chairing the department on several occasions, as well as serving on numerous campus committees and the Board of Directors of the Rocky Mountain Modern Language Association (MLA). He also took part in the now-legendary CC Trivia Bowl, debating student and faculty teams to triumph with his long-time friend and colleague, English Professor Barry Sarchett. He is, as Sarchett said in his speech at the retirement celebration, a “true polymath – he knows everything!” Simons has been happiest in recent years working on the college’s architectural committee for the beautiful new and expanded Tutt Library, while serving on Team Tutt during the construction process.

There is a humility and a humor to Simons as a teacher, as a man. It perhaps, after all this time, comes from where he grew up. As his friend and team-teacher Political Science Professor Tim Fuller wrote and spoke of him, Simons “remains a patriotic Michigander, committed to the idea of Michigan while happily settled at the foot of Pikes Peak.” There’s a tenacity and a strength of character to the wind and snow-driven denizens of the Midwest, a drive to learn, to build community, and to care. Simons, as a teacher and member of Colorado College, has done that — and so much more.

In a line from his beloved “Ulysses,” the main character — Stephen Dedalus — talks about his journey through the world. It is one worthy of Professor John Simons, and his impact here, on so many generations of this community.

“Every life is in many days, day after day. We walk through ourselves, meeting robbers, ghosts, giants, old men, young men, wives, widows, brothers-in-love. But always meeting ourselves.”

Thank you, John, for helping so many of us meet ourselves — in your classroom and beyond. 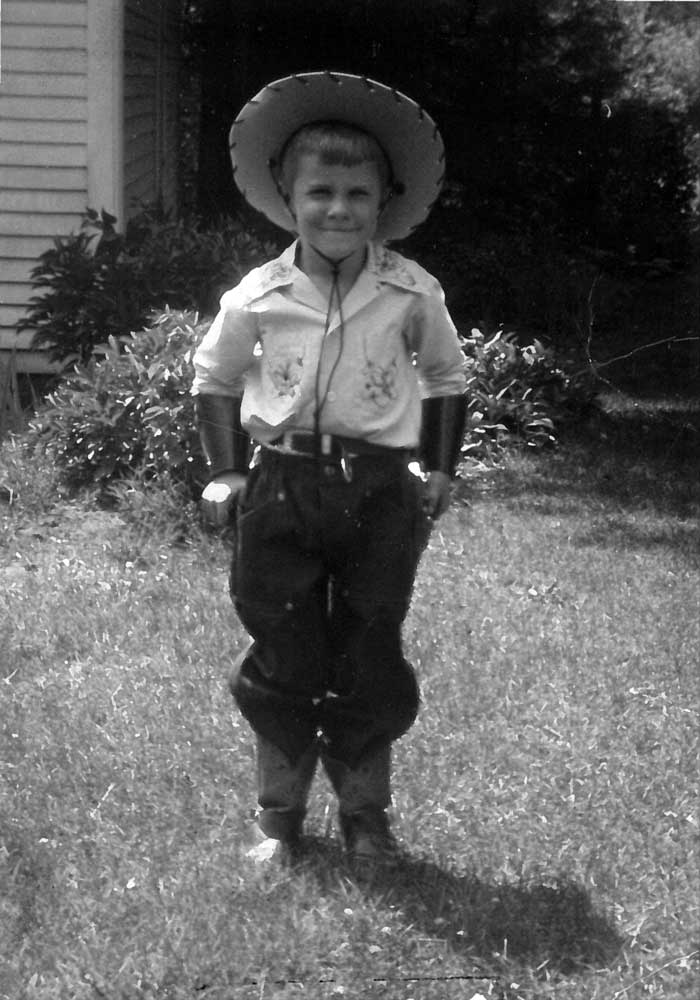 Simons fell in love with westerns at an early age.

If you have photos of John to share, please email them to