Steven Janke became a mathematician because of two Englishmen.

“When I was 14 years old, I first read ‘Mathematical Models’ by two English professors [ed. — H. Martyn Cundy and A.P. Rollett, in continuous publication since 1952], which spoke about and showed me visual mathematics. That got me going; drawing curves, building small models, and so on,” Janke recalls.

At CC for 41 years, from 1975 to 2016, Janke’s career as an educator, researcher, and scholar has shifted direction and focus many times over the years. What has remained at the core of his work in all its aspects, however, is that — as he says — “Math simply made sense to my brain; it always has!”

Janke settled on the University of California Santa Barbara for his undergraduate education, and received his B.A. in Mathematics in 1969, graduating Phi Beta Kappa, after spending three years at UCSB and one year studying abroad at the University of Sussex, on the south coast of England.

“I actually started in chemistry,” Janke says. “I jumped around a lot — from chemistry I then went to physics, and then finally settled on mathematics.”

The draw to mathematics was due, in part, to an emotional and philosophical pull for Janke as much as a practical one.

“My interest in math always felt purer than anything else. I had, and still have, a strong interest in philosophy, which goes along with certain strains of mathematics quite heavily. It’s talking about ideas, really, especially when you get into my areas of expertise — randomness and probability,” he says. 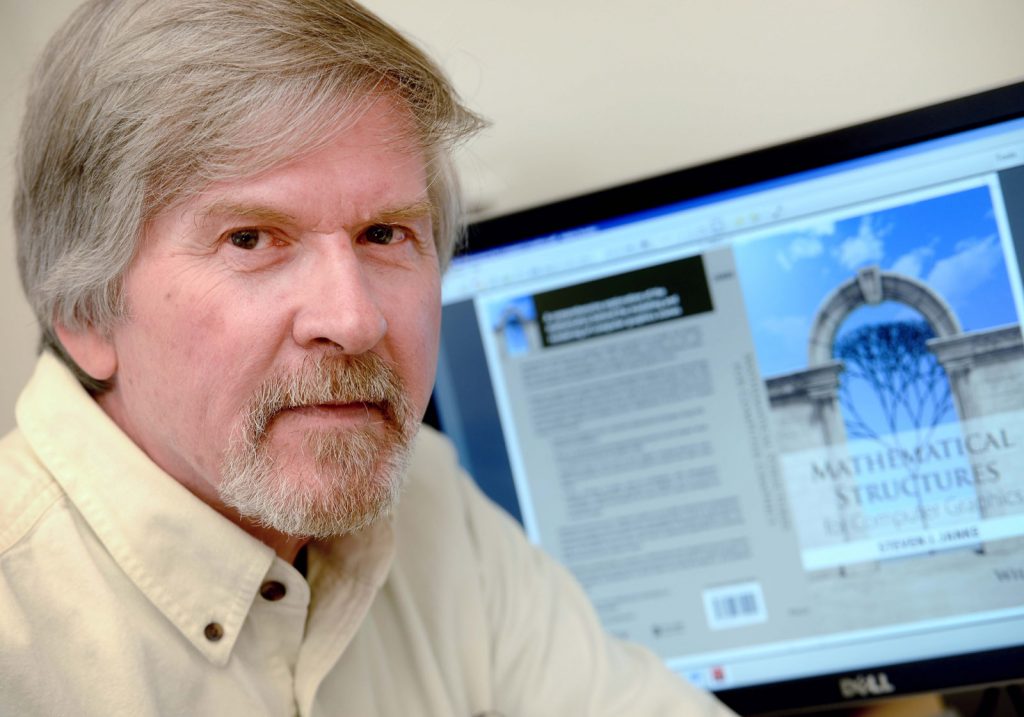 Stochastic processes form a particular topic in the study of randomness, and Janke dove headlong into it during his graduate work at the University of California Berkeley, receiving his M.A. in 1971 and his Ph.D. in 1982.

“One of the classic examples of the stochastic process is the random walk; you walk down a street, get to a corner, flip a coin, and go in whichever direction that flip indicates. One of the questions we’re examining is the probability of getting back to the beginning, purely by increments of coin flips — that’s what I researched, in short — the concept of randomness at every time increment,” Janke explains.

Alongside his graduate work at Berkeley, until 1975 in fact, Janke had been working for PASCO Scientific designing and building equipment for teaching university physics. That contact with classroom-adjacent work, alongside his graduate schooling environment, pushed Janke to look strongly at a career in teaching, rather than R&D.

“I was used to large colleges in California, and had been doing design and electronics work as well, and I wanted to try something different in academics, which is how I ended up at CC,” he recalls.

Janke applied to a range of institutions, but his background — coupling research and design with high-level academic study — pointed him in the direction of the liberal arts, and of CC.

Arriving as a lecturer in mathematics, Janke took over from the legendary professor Wilson Gateley, who’d been at the college since 1956 and whose teaching had focused on mathematical statistics, which Janke immediately took on.

“The department was incredibly welcoming to me,” Janke says. “I arrived at CC when we were on a nine-block system, but we taught the same course several times a year, which reduced prep time a little in what would have otherwise been an incredibly packed teaching course load.”

While he was comfortable with the liberal arts, adapting to the Block Plan took some time and, “I admit that the switch to eight blocks was a relief for me personally. I just grew to really like teaching, and that’s something that continues to today,” Janke says.

As with many of his faculty colleagues, Janke found that teaching on the Block Plan encourages student engagement with the learning material in a way that far outstrips regular semester-based schools.

“You, as a professor, have considerable flexibility in the classroom,” he explains.

“This allows you to take up the challenge of reaching every student. Small upper-level classes are particularly rewarding — when we can really tackle the conceptual as much as the practical material.”

As Janke gained standing in the department and rose up the academic ladder, chairing the department twice from 1985-1988 and again from 2003-2006, he returned to some of his earlier interests in design and computer science, dovetailing them with his mathematical research and teaching.

In 1989, at Janke’s driving, computer science became an optional emphasis for mathematics majors at the college. In 1992, as a result of a proposal from Janke, AT&T awarded CC $145,000 worth of computing equipment through the AT&T University Equipment Donation Program. Twenty computers and a variety of software landed on campus that year, forming the nucleus of the mathematics computer lab in the basement of Palmer Hall. In 2005, with a large amount of direct involvement from Janke and his passion for computing, CC launched its full major in computer science.

Commitment to the liberal arts was a key component of Janke’s career at CC from the outset, particularly collaborating with his colleagues across campus in other academic departments. Janke expanded his research and teaching beyond the mathematics classroom, working with Professor Ron Capen in the Biology Department to create a model of the human lung, and later teaching courses in the Environmental Science program. He created a co-taught philosophy and math course with Professor Judy Genova called Minds, Machines, and Mammals, as well as engaging non-science students in the class Patterns in Nature. In 1996, he was awarded a Benezet grant alongside his colleague Professor Fred Tinsley, to develop and co-author a textbook, “Introduction to Linear Models and Statistical Inference,” and in 1994 he was one of the faculty to serve on the Block Plan Evaluation Committee, which worked on an intensive and expansive review of CC’s Block Plan in its 25th year of use at the college. Furthermore, his excellence in teaching led Janke to become one of the pioneering members of the steering committee that created the Teaching and Learning Center, now the Center for Immersive Learning and Engaged Teaching.

Appointed the Vernon Z. Reed Professor of Natural Sciences from 1997 to 2000, Janke has no shortage of accolades or memberships to his name, including a 2008 Burton W. Jones Distinguished Teaching Award from the Mathematical Association of America’s Rocky Mountain Section.

“The rigor, intensity, care, and gentleness that so deeply characterize his teaching, are at the core of his research and service too,” says Janke’s longtime colleague, Professor Mike Siddoway. 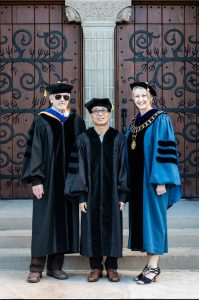 “Steven is known across CC for his ability to reach weaker students, to help them tap their own mathematical visions. He has also had a profound influence on our best students, and unlike anyone else in the department, his impact for three decades has included students from all areas of mathematics, statistics, and computer science,” Siddoway adds.

Janke retired from full-time teaching in 2016, and was honored with an anonymous estate commitment to the college of $5.6 million, from a member of the Class of 1982. $3.1 million of the gift was requested to be directed towards financial aid, and the remaining $2.5 million to establish a chaired professorship in honor of Janke.

“When I was a student at Colorado College, Steven Janke changed everything. I had not been a successful math student, and he helped me regain my confidence. He also piqued my interest in computer science. His advice and encouragement shaped my career,” wrote the unnamed alumnus.

Such was Janke’s impact on this student, and generations of others, that a celebration in honor of his teaching career — still ongoing as a retired member of the faculty — is only right.