In Professor Jason Weaver’s 5th block course, Japanese Americans During WWII, his students explored the voices of people who were interned, and considered the social and political forces present during WWII. They also considered cultural factors common among Issei (first generation Japanese immigrants) and Nisei (second generation Japanese Americans) that could influence these experiences and events.

In the UnBlocked exhibit, students were asked to consider three groups of objects that might provide insight about the experiences of Japanese and Japanese Americans. The photographs allowed students to compare and contrast what one of the camps (Amache) looked like during the 1940s and present day. The artwork encouraged students to speculate about the experiences and perspectives of interned artists. And the propaganda provided context for ways that Japanese Americans were viewed and treated by society.

The following is Jason’s response to his experience planning for and using UnBlocked Gallery with his students. 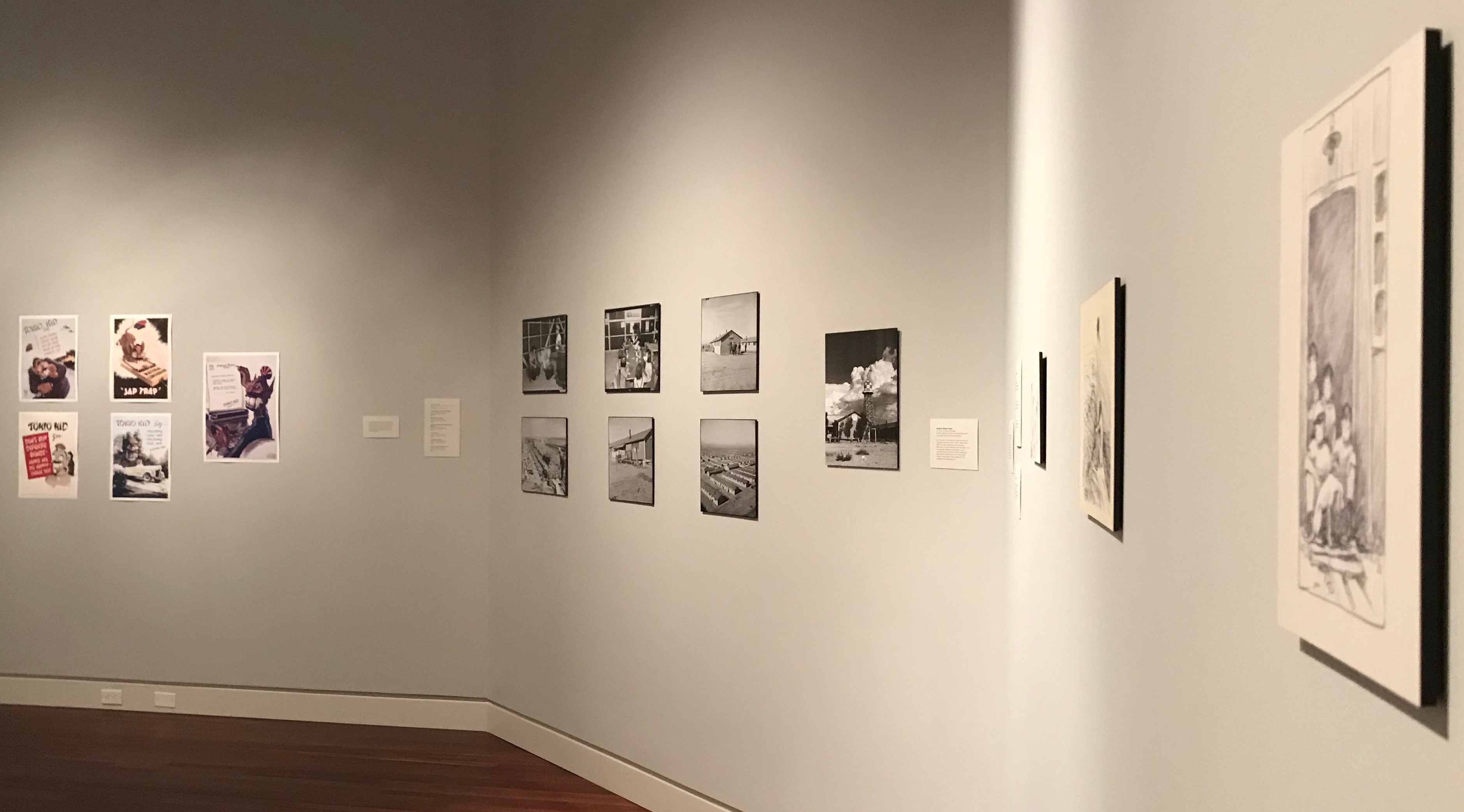 How did you find out about UnBlocked and what convinced you that it was a good choice for this course?
Jessica Hunter-Larsen visited our department meeting last year and invited us on a tour of the FAC. In those two sessions, she provided a lot of information about UnBlocked and encouraged us to talk to her, even if we weren’t sure how to use the space. Because I’ve always been interested in adding an internment art component to my Japanese Americans during WWII course, I met with Jessica to talk about some of the possibilities. She helped me to see a lot of potential in areas where I hadn’t anticipated; how improved visual thinking skills would benefit my field trip, how I could incorporate art supplies into discussion, and improved attention to detail. I really went into that meeting with a vague sense that I wanted to try to incorporate a couple of pieces of art into my course and left with an enthusiastic plan to use the UnBlocked gallery and improve several other parts of my course.
What were the learning goals for your class and in what ways did UnBlocked help you to meet those goals?
My course is largely about perspective-taking and learning to approach an event from multiple angles. I rely heavily upon experiential approaches to make the internment more real to students. The objects in UnBlocked provided some great entry points for helping students to really step into the perspectives of internees, non Japanese Americans, and policy makers during WWII.

UnBlocked is a new resource for faculty – did you have any reservations about being among the first to use it?

Yes, absolutely. By the end of my first day in Unblocked, I had effectively doubled my lifetime time spent in art museums. I was very concerned about my lack of familiarity with art, as well as my inability to ask other faculty about their experiences with UnBlocked. Jessica was always extremely helpful in finding ways to make me more comfortable and to scaffold my experiences in order to make the course a success.
What was your vision for UnBlocked and how did that evolve throughout the planning process?
My “vision” was pretty vague and unformed. Basically, I knew that I wanted to show my students something visually about the internment. As I was exposed to the possibilities, it became clearer to me how I could use various types of objects to compliment my existing approaches to accomplish my course goals.
UnBlocked is a collaborative effort – how did you feel about the additional planning required to use this resource? (Did the outcome justify the investment?)
It really was worth it. Although there was some cost in terms of time spent planning, that time also provided benefits beyond the specific course I was designing. I learned a great deal that is informing my approach to teaching my other courses as well.
Can you tell us about your favorite day using the space? Or maybe a favorite conversation or insight from your students?
My favorite day came on an unplanned visit to UnBlocked. Class discussion had led to a point that seemed easiest to consider while in the gallery, so we stopped everything and went to the gallery. When we got to the gallery, our discussion took off in a number of different unexpected ways as we all (myself included) started to notice things in the objects that we had missed in our previous visits. It was one of the better class discussions that I have experienced.
In addition to visiting UnBlocked Gallery for daily class discussions, Jason directed each of his students to write an analysis of an object of their choice. The following is a selection of their work.

Soft smiles and gentle chuckles radiate from three handsome Nisei men, inviting you in as a viewer, or maybe a friend. Cap upturned, jeans and sleeves cuffed, these pals might be engaging in some casual banter. Their posture relaxed, the fellows seem unphased by the lack of furnishings, opting to lean against a wood-fired stove, slouch on folded mattresses, or utilize a suitcase for a chair. Zoom out and notice the scaffolded walls lacking both windows and insulation. Perhaps this time of year is warm enough to dress casually, but winters would not allow the same comfort. The floors too, are bare and personalization of the room is nonexistent.

Were these men settling in to a new space, or on their way out? A 1942 date could suggest either. Although the forced removal of Japanese Americans was not complete until August, by May 1942 college administrators encouraged young Nisei to enroll in colleges in Eastern and Midwestern states. Supported by Issei fundraising, private scholarships, and the U.S. government, more than 4,000 students received a train ticket East and a college education. For the War Relocation Authority (WRA), this was an attempt to disperse Japanese American “ambassadors of goodwill” and prepare the public for general resettlement.
Tom Parker, the photographer who captured this image, represented the institutional perspective of the War Relocation Authority Photographic Section (WRAPS). Historians now view his work as propaganda, and as exemplifying a history of paternalistic WRA management ideology, attempting to portray favorably all phases of Japanese American relocation, incarceration, and internment. These three young men are exposed to the immense discomfort of camp life plus institutional contempt. Their smiles suggest perseverance, even contentment, but a second look through Tom Parker’s eyes may reveal ulterior motives in choosing this scene.
Koki Atcheson
Colorado College ’19
Pouring milk from a pitcher, Mrs. Sumi Kashiwagi tends to her nursery school class. Graham crackers and cups of milk lay sprinkled over a wooden table. Some children sip from their cups while others patiently wait their turn. Children calmly sit in chairs, dressed sharply in sailor suits, bows dotting dark-haired heads. This tender scene may not be all what it appears.
Imagine your kindergarten classroom. What do you hear? Gleeful laughter, lively chattering, the kind but stern voice of your teacher. What do you see? A kaleidoscope of colors and shapes from pictures and posters. Toys scattered on soft, carpeted floors. Smiles emanating from children’s faces. A room of stimulation and discovery.
These 2nd-generation Nisei children do not chat with their neighbors. They wait for their milk and crackers, foreign rations from the War Relocation Authority (WRA), unfamiliar to the mouths and stomachs of children whose Japanese families do not eat much dairy. Surrounding walls remain uninsulated, their beams and tacks showing through. Faded posters hang bleakly above an unmortared brick floor forming a single barrier against dirt and dust. A lonely paper Santa hangs on the wall. It is Christmastime.
Only a single window, far above the eye line of a child, breaks up the barren wall. A little boy in stripes stares away, perhaps wondering what lies beyond the barrack and the fence beyond.
The WRA and Japanese parents recognized the importance of education in camp, although for different reasons. While parents urged schooling as a path to social advancement and a sense of normalcy, the WRA emphasized “Americanized” curriculum to ensure national loyalty. Student-teacher ratios of 48:1 in classes housed in renovated barracks left rooms cramped. Few windows and no insulation led to scorching summers and frigid winters, and proper school supplies were always scarce.
Alexandra Wong-Appel
Colorado College ‘19