The impetus of the movement, according to various straw-free campaign organizations like the Plastic Pollution Coalition, is thought to come from a 2015 video of scientists pulling a straw from the bleeding nose of a turtle. In the past year, the video has gone viral and the “last straw” campaign has spread rapidly through social media. 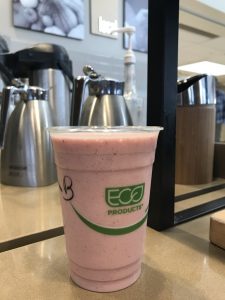 Bon Appetit, the food contractor for Colorado College, operates in over 1,000 cafes in 33 states. It is the first company to go totally straw-free, expected to completely phase out straws by September 2019. Other companies, from Starbucks to Alaska Airlines, plan to take similar action in the next few years. But do these companies really care about the environment? And is banning straws the best way to do it?

“We want to do our part to clean up the environment,” said Steve Towler, a 10-year Bon Appetit employee on the Colorado College campus. Citing the company’s move to ban straws, as well as their recent push at Colorado College to use compostable cups and encourage students to bring their own reusable mugs for coffee, he says that Bon Appetit is very environmentally conscious and leading the food industry in measures to protect the environment.

But others think the straw-free campaign is well-timed greenwashing to enhance the company’s image.

“It’s just trendy,” said another Bon Appetit employee, who asked to remain anonymous for fear speaking openly could jeopardize her job. “I think it’s just because it makes people want to go here.”

While straws are the 8th most plentiful ocean trash found at cleanups, according to data from the Ocean Conservancy, they make up a small percentage of marine plastic pollution. Plastic bottles and grocery bags are found more frequently. And other garbage causes much greater harm. 640,000 tons of fishing gear are left in the ocean every year, according to the World Animal Organization, and kill thousands of marine creatures annually.

“It’s good that there’s efforts,” the Bon Appetit employee said. “I just don’t know how actually genuine those efforts are.”

Straws, it seems, are nowhere close to the most environmentally harmful garbage out there. They’re simply the easiest to do without.