GREAT SAND DUNES NATIONAL PARK AND PRESERVE — On a Monday morning, stuffed inside a conference room, Fred Bunch took a moment to lean back and bugle like an elk. Then he chuckled.

In 1968, Bunch hopped on an old cruiser in Alamosa, Colorado and pedaled through the San Louis Valley until he arrived at the Great Sand Dunes. Now, he’s a park ranger and the Chief of Resource Management.

What’s kept Bunch at the Dunes for so long? “The frog spirits will get you,” he joked.

According to his legend, old Lake Alamosa broke free from its dam millennium ago. The water poured out, killing all of the frogs in the flood. Somehow, their souls stuck around. They are Bunch’s amphibian guides, reminding him to stay home.

And it’s a majestic home. The Great Sand Dunes began to pile up 400,000 years ago in a curve of the Sangre de Cristo Mountains, a thin spine of peaks that stretch from southern Colorado to northern New Mexico. From a map, it looks like a giant accidently stepped on the mountain range. Its heel carved out a bowl with the right amount of sediment, wind, and water runoff to form the colossal, sandy dunes. 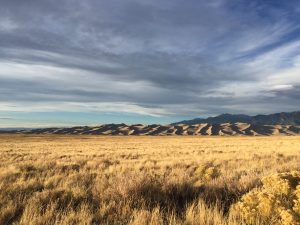 “The laws that set aside National Parks is a uniquely American invention,” said Bunch. In the early 1900s, a group of women known as the Philanthropic Educational Organization (PEO) Sisterhood scribed letters to legislators and rallied their community to protect the Dunes. In 1932, President Herbert Hoover called upon the Antiquity Act of 1906 to proclaim the landmark a National Monument.

The people stood up for the land. The government took action.

On September 13, 2004, Congress finally authorized the Monument’s expansion into a National Park and Preserve.

Fred Bunch believes people should have access to pristine landscapes, areas unfettered by the incessant pollution in our modern, urbanized world. He has dedicated his life to protecting the Dunes.

Indeed, the Great Sand Dunes are a complex ecosystem. Cottonwoods line the creeks, cutthroat trout flap in the mountain water, tiger beetles scurry out of burrows, and dune grasses web their roots through the sand. 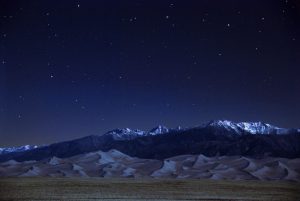 To him, that also means protecting darkness—and the creatures that emerge at night.

Fred Bunch wants the Great Sand Dunes to be recognized by the International Dark Sky Association (IDA). To be a designated Dark Sky Park, Bunch needs to record the darkness of the dunes. Are nearby towns too bright? Are light fixtures at the park polluting the nighttime environment?

With a Sky Quality Meter in hand, Bunch gathers data about darkness. He consistently records a measurement of 21.7 out of 23 – the “gold tier” level of a dark sky.

National parks protect wilderness. They don’t protect darkness. If the IDA approves the Great Sand Dunes as a Dark Sky Park, it will help safeguard it as a whole ecosystem.

In the chilly evening air of the San Louis Valley, colors bleed together across the sky. At first, fresh blue. Next, golden and pink. When the sun sets, the clouds become as red as desert rock.

Then stars appear like freckles. A sweeping of planetary dust forms into constellations. The Milky Way arcs overhead like a celestial rainbow.

“Dark. Quiet. You’re on the dunes…” whispered Bunch. Like a true storyteller, Bunch narrated the nocturnal habits of the park. 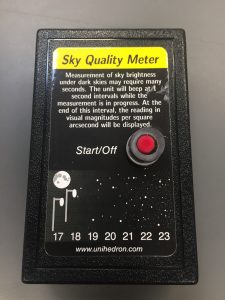 Kangaroo rats emerge from their sandy homes, seeds stuffed inside their cheeks. Owls swoop overhead. Their wings swoosh. A scurry of tiny paws and rippled sand. The predator attacks its prey for a midnight snack. Coyotes howl.

Darkness is vital to living things, according to the National Park Service. Birds navigate with the stars. Artificial light interferes with natural processes in amphibians and the foraging patterns of mammals. Zooplankton float to the water’s surface at night to feed.

Even humans need the dark. It helps us sleep. It regulates important hormones in our body – specific chemicals that keep us healthy and able to fight disease.

A study in Science Advances estimates that 80% of people on earth live in light-polluted skies. They can’t see the stars.

Fred Bunch – a bugling, frog-spirited Park Ranger at the Great Sand Dunes – hopes to change that. Everyone, it seems, needs darkness.