ALAMOSA – As the country’s second-largest potato producing region, the San Luis Valley is known for its agriculture. The growing season lasts only 90 days. Killing frosts can occur at any time. But fertile soils, low pest populations, and irrigation have made farming here worthwhile for generations.

Or at least, they have until overpumping of the aquifers and a drought beginning in 2002 caused wells across the valley to produce less water.

“When it’s managed properly, [the valley] has an overabundance of water,” said manager of the Rio Grande Water Conservation District (RGWCD) Cleave Simpson,, during a recent interview at his office. But as things stand now, “it’s a highly over appropriated system,” Simpson said.

It was a snowy day in the San Luis Valley. Heavy gray clouds hung low over the plains, obscuring the steep mountains ringing the valley. Flat blond fields, encrusted with snow and dotted only occasionally with run-down clusters of houses, spread in all directions until they melded with clouds on the distant horizon. Pickup trucks sprayed slush as small snow flurries danced through the air.

This was the first measurable snow in nearly a year. Last winter, Simpson said, he swept his sidewalks once with a broom. 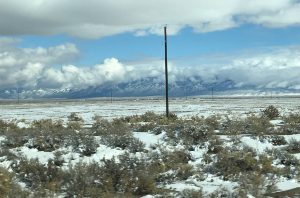 The San Luis Valley encompasses 8,0000 square miles of high altitude desert in southern Colorado, ringed on three sides by mountain ranges. While the mountains receive 30 to 40 inches of precipitation annually, the valley receives less than nine. The Rio Grande River, fed by snowmelt deep in the San Juan Mountains, runs through on its way to the Gulf of Mexico. In 2001 the Rio Grande failed to reach the ocean for the first time. In 2018, the river measured 10 cubic feet per second at the state line between Colorado and New Mexico. Most of that water came from Alamosa sewage discharge.

The Rio Grande surface water is managed extensively under the 1938 Rio Grande Compact, which promises water to New Mexico, Texas, and Mexico. Because of this, farmers in the valley mostly rely on underground aquifers to supply their irrigation needs. And with wells across the valley going dry, the RGWCD was created to replenish the aquifer.

“We built a whole culture on irrigated agriculture,” said Simpson, “on a water supply that no longer exists.”

A court-mandated order requires the aquifer to be replenished to 2002 levels by 2030. Farmers in the newly created water sub-districts, which include every San Luis Valley county except Costilla, have agreed to tax themselves $75 per acre-foot of water they pump and can’t replenish, Simpson said.This money will be used to pay farmers to let land lie fallow to recharge the aquifers.

Progress was being made and farmers were hopeful, Simpson said, until a major drought hit in 2018. Now aquifer levels are nearly as low as when conservation efforts started.

“We lost almost everything we gained in one year,” Simpson said. “A lot of people have told me what we’re doing feels like rearranging the deck chairs on the Titanic.”

“We knock ourselves on the head trying to do agriculture . . . and sometimes I wonder why?”

Developers on the Front Range will pay up  to $30,000 per acre-foot of water, Simpson said. A Denver-based company, called Renewable Water Resources, just proposed a plan to divert 22,000 acre feet of water per year from the San Luis Valley to the urban Front Range. A company geologist claimed  800 million acre-feet are left in the aquifer, a number Simpson questioned.

Other areas of the country, which are less isolated and have more water, can grow things more efficiently. Simpson grows primarily alfalfa, although he’s switching to less water-intensive crops like industrial hemp and quinoa.

“I don’t want to sell my farm,” he said. “This place just has a draw and attraction for me. I love the open space . . . I love how this place is structured.”