The Hollywood sign is situated on top of Mount Lee in the Hollywood Hills.  The sign overlooks downtown Los Angeles and Hollywood, and from the tip of Mount Lee, you can see for miles.  When the sign was first built in 1923, it originally read HOLLYWOODLAND, and was an advertising stunt for the new houses being built in the area.  The sign was designed for each letter to be 30 feet wide and 50 feet high, and cost around $21,000 — or $300,000 2014 U.S. dollars.  There were light bulbs on the original sign that would light up the letters. The sign was only to be erected for a year and a half, but as Hollywood entered its Golden Age, the sign remained and has been a staple of Los Angeles ever since. 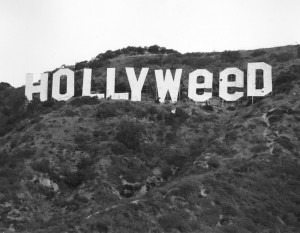 I decided to make the hike up to the sign, and after getting lost a couple of times, I finally reached the summit of Mount Lee. The view was amazing.  Looking out across Los Angeles, you can see out to the beaches and the mountains,  and behind you is Burbank, which is an incredible view in itself.  It took me a long time to hike up, but looking at the letters that are 45 feet tall and made of just sheet metal, it is incredible the shape that they are in and the fact that they are made of merely sheet metal is amazing.  I would recommend the hike, if not for the letters, than for the view of Los Angeles and Burbank. 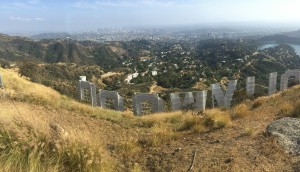