“A stranger, and alone!” 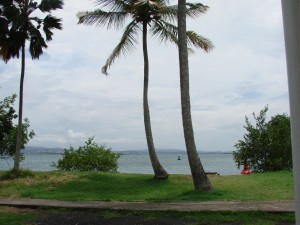 Now that my children have flown the nest, my husband is working two jobs, and my research is taking me to unfamiliar places where they speak French, at least a couple of times a year I find myself in a moment just two breaths away from panic:  What am I doing here, a middle-aged woman with poor eyesight and poorer French? Sometimes that moment happens in front of a microfiche machine that isn’t working, or in front of a French bureaucrat asking the classic French bureaucrat’s question, “Well, Madame, what would you have me do?”.

Today it happened at a moment as I was wandering around the Martinican village of Trois-Ilêts, with a map that seemed to have no relation to the streets that I was seeing, and directions to a grocery store from people who have no idea that being in a car and walking changes not only your perspective but the landscape itself.

The plan for the day had been simple enough: although I was tempted to jump on the ferry (once I found it) and start browsing through the catalogue at the Bibliothèque Schoelcher, it made more sense to get breakfast; find a grocery store (my dinner last night had been two digestive crackers from the hotel in Liverpool, half a chocolate chip cookie from an airport meal a couple of days ago, and a cup of unsweetened, unmilked tea); get a ferry schedule; and orient myself. I would spend the afternoon writing my first blog post and going through the material I had brought with me to develop a research plan of action that was a little more focused than looking up “my” women’s names in the catalogue.

And suddenly, it seemed very, very hot and very, very humid and I felt very, very alone.  I thought of all the other people who had been at the airport, being picked up by friends and family or air-conditioned megabuses that brought them to their air-conditioned resorts while I, after inquiring about alternatives to the wallet-busting 60 euro cab ride (“J’ai entendu qu’il y a des petits auto busses…?”), and all the people around me now with cars who obviously knew where they were going, who could drive the 15 minutes to the Carrefour near the roundabout and get everything they needed without having to calculate what they could carry 45 minutes up a steep hill in what felt like 100 degrees and 100 percent humidity.  I missed my husband, who would be joining me in 2 weeks (with a rental car), and my daughter, who is my perfect travel companion but couldn’t take time from work to come with me.  I wondered if it was a sign of cardiac weakness that I simply had to sit down.

Luckily, this low point didn’t last long (they never do). A few quiet moments on a park bench, staring between two graceful palm trees across the bay to Fort de France, inspired me to tell myself in wonder, “I can’t believe I’m here!”  How delicious the sea breeze felt against my uncharacteristically perspiring skin, how stunning the scenery was, yet I also felt the presence of the thousands of slaves who had labored~ many until death~ to satisfy Europe’s taste for sugar in conditions far more intolerable than my own little tourist discomfort. “I can’t believe I’m here”~ in Aimé Césaire’s world~ in the village where Suzanne Roussy, the surrealist writer who became his wife!~ was born ~ where the heroine, if you could call her that, of “Je suis Martiniquaise” rode her horse from her village of Carbet from Fort de France~ where almost 100 years ago young students railed against “the coloured bourgeoisie” for being brainwashed into considering themselves Frenchmen~ and now impeccably groomed young men with skin the color of plums wear American hip-hop gear that somehow doesn’t look American on them.  Martinique~! A world of unfamiliar histories, stories, and lives lived, that I can only glimpse. But how tantalizing are these glimpses! I feel the exultation~half fear, half wonder~that Langston Hughes described when he landed penniless, knowing no one, in the dead of a Parisian winter: “But here I am in Paris, a stranger and alone!” It is a lovely thrill that I’ve sought in Paris as well as on the Perfume River in Vietnam.

A young woman told me that it would be easier, without a car, to take a bus to the village of Riviére Salée, as there was a bus stop right by the supermarket.  And just as in a Green World play, here is the bus right now, air conditioned and only a euro twenty and yes, it stops right across the street from a Leader Price.

I go into my traveling weight-loss mode.  Despite eating wonderful food when I’m in France, I always lose a pound or two because I can’t load up the car with whatever looks tempting or is on sale and I always have to carry groceries upstairs. My last two Parisian apartments were on the sixth and seventh floors; my Trois-Ilêts rental is not only on the top floor, but the apartment building sits on a steep hill. Lettuce, eggs, yogurt, butter, pasta, and a bottle of wine; I forgo the block of cheese, sugar, a candy bar, anything canned, even the tuna fish, which is a staple of my diet. The Atkins diet this isn’t, but if I could ever stay in a Francophone country long enough, I’m sure I’d be thinner.

The place on the opposite side of the street where I descended the bus is not marked as a bus stop, and I suspect that the driver let the mother and her children off right across the street as a courtesy.  I ask a municipal worker sitting at a truck where the stop is, and he offers to drive me the half-mile or so to it. The Martinicans whom I have encountered in my first 24 hours have the French politeness but with a warmth I don’t see in Paris. Perhaps because I’m not in a city, and I’m a stranger of a certain age by herself, people are very helpful.

While waiting in the bus shelter, a ginger-bready “Creole-style” hut, I witness one of those brief, intense, vertical tropical rains that I have read are characteristic of Martinique in July.  It seems to come from only one cloud~ around the cloud is sunshine and cumulus. After about 12 minutes, as if someone closed a faucet, the rain just stops.  It is sunny, but now cooler and steamier.

The bus arrives, and I ask the driver if I could get off at a stop just before the Pointe de Boue.  Finding the correct stop for me becomes the project of the entire little bus, and hooray~ I can get off (though it is not a real stop), right at the foot of the hill road that leads to my apartment.

So ultimately, the morning has gone well.  “What luck~!” as Lily Bart would say: the right bus just appears the moment you learn of it, the rain comes as you wait for the return bus, but the sun comes out for your walk up the hill. And across the bay are an enormous library, and an archives full of pages where Paulette and Suzanne and Lucie pressed their wrists and their pens as they asked and exhorted and dreamed and explored and crossed the Atlantic and came back.

2 Responses to “A stranger, and alone!”