I’ve noticed something strange about the way I see things here.  Objects that I assume are large and far away are small and close by. An apartment building that the caretaker pointed out to me as a landmark for the boat landing looked as if it were a 45-minute walk, not barely 20. The cathedral spire in Fort-de-France, viewed as the ferry approaches, seems a massive presence over the city~ but it is a block and a half from the dock  and the size of a small American church.  Although I came in on a tiny propeller jet from San Juan, Air France and Air Caraibe 380s  are constantly flying low over the bay, looking like illustrations that wandered in from another book.  Why do my eyes  play these tricks?  It is as if I haven’t learned to see Martinique, haven’t scaled my Western-state  American lens to the appropriate perspective.

Today was my first full working day.  I rose around 6, had one of those miniscule French yogurts and resisted the temptation to have a second (they are what the French consider “one serving”), packed up my book bag (the Michelin guide suggests never wandering Fort-de-France alone, only traveling the edges of the great public park, the Savane, and being vigilant about rampant crime~ hadn’t heard any of that from my professor friends and colleagues who have done research here) against both rain and pickpockets, and headed out to the ferry.  It was raining lightly, and the world smelled new. 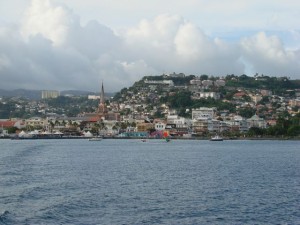 The few blocks I saw of Fort-de-France today surprised me on many levels.  First, I stopped by the famous Saint-Louis cathedral on the way to the Bibliothèque Schoelcher.  It is a beautiful example of Creole architecture, both inside and out: the filigree woodwork, the bright colors.  But the exterior looked terrible~ peeling paint and wood. I assumed that it was undergoing renovation, but it was not.  The second surprise was all the activity within the cathedral~ although it was a little after 9, I thought perhaps a mass had just ended or was about to begin. But no, during my 20 minutes or so in the cathedral dozens of devout people came in to light candles or say prayers and then go on to the rest of their day.  There were both men and women praying, and they were of all ages. Later in the morning, I would be reading about the fierce rivalry between two feminist groups~ Paulette Nardal’s Catholic Rassemblement feminin”, which attempted to « connaître les problèmes sociaux concernant la famille, la profession, la cité ; étudier leurs solutions à la lumière de la doctrine sociale catholique » (know the social problems concerning the family, work, the civic sphere [citizenship~ women had just gotten the vote when she founded the group] ; to study their solutions in the light of Catholic social doctrine » and the communist feminist group, the Union de Femmes Martinique.  The agendas of both groups were almost identical : working for women’s equality in all realms of Martinican life, but the communist organization felt Nardal’s organization a threatening bourgeois group that used their domestic education programs as a means of training their maids.

Next, I stopped by the famously beheaded and paint-blood bespattered statue of the Empress Josephine, who was born in the village where I’m staying (Suzanne (Roussy) Césaire, one of “my” surrealists and the wife of Aimé Césaire, was also born in Les Trois-Ilêts)) and continues to be both a source of pride and resentment for Martiniquais.

In à la française mode, I thought it best to stop to prendre un café at a little place just before the library.  Then, I walked up to the Bibliothèque Schoelcher, and knew the moment that I stepped inside that I would love working here.  The original building was erected in Paris in 1899, where it won numerous architectural prizes, and then transported and rebuilt, brick by brick, windowpane by windowpane, in Fort-de-France, to house the library of the much-revered white French abolitionist, Victor Schoelcher.

As I walked over the still bright floor tiles and was hit by that wonderful bookbinding smell that all libraries used to have, I was confronted by an exhibit of a woman who was a poet, teacher, and leader of the UFM, Solange Fitte-Duval .  Born in 1920, most of her career is after the 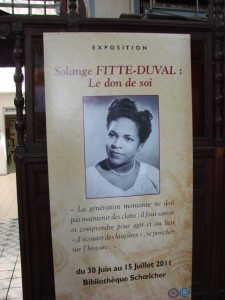 period I am studying, but I had never heard of her, and the exhibit, which detailed her youth, her poetry, her activism, and her private life (she is still alive) was fascinating, and set the tone for my labors for the rest of the day.

I won’t bore the non-scholars among you with the details of the challenges of finding traces of women’s lives in library and archival catalogues, but I’ll only say here that I had a very productive day, reading a documentary history of Martinican women from the era of the Caribs to the present day, produced in 2008 by the Departmental Archives. I read it cover-to-cover, and got several fruitful leads.  I’ll spend the rest of the week looking at periodicals and searching for information about two of my most elusive women. 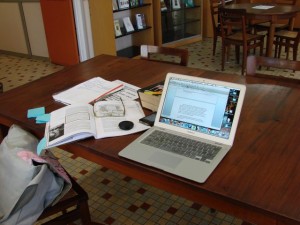 There was only one other scholar in the Antillean Collection reading room~ a woman~ and two library workers who were singing (yes!) and chatting for almost two hours before one went off duty.  They were both very nice to me, though, helping me find things and not charging me for photocopying.  It rained on and off throughout the day~ I got up once in a while to look at the large wet palm leaves outside the window while stretching my legs, and packed up shortly before four.

I wandered back to the dock through narrow streets lined with cheap clothing boutiques. I saw only three white people, even when I stopped for a quick look at an arts center that is now housed in the old Palais de Justice.  I’ll write more about Fort-de- 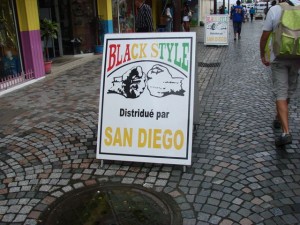 France when I have seen more of it, but for now, I will say this:  it demonstrated what I have read about contemporary Martinique: it is black and poor.  Since slavery, Martinique, though first a French colony and then, since 1946, a “department” or state,  has been overwhelmingly black~ at the end at the 18th century, over 89% of the island population was of African descent.  On another but related note, I heard English for the first time since I arrived here~ there are many tourists in Les Trois-Ilêts but Americans don’t come here.  A Latina and her son were touring the gallery at the art center. My cab driver says the only Americans come in on the huge cruise boats during the winter months and dash into Fort-de-France for an afternoon.

As I walked back up the hill to my apartment, I saw the family to whom I had surrendered my window seat.  The woman is very dark-skinned, with natural hair. Her husband looks a little like a beefier, younger Julian Bond.  Many Americans would assume he is “white.” Their children are blonde. I wonder if the notoriously finely calibrated color/caste metrics are still alive on this island as they were during the period I am studying.  Next week, I’ll be getting together with the mother of some friends as well as meeting some friends of colleagues at the university, I hope, so perhaps I’ll learn more. Just as in Paris, people assume I’m a Martiniquaise until I open my mouth.  The airport cabdriver inquired, in a way that sounded more like an observation than a question, whether my family was originally from Martinique, then asked where I learned to speak French, then.  Both African Americans and Martinicans are here in “the West” thanks to slavery; why do some Americans assume that Martinicans are less “French” than African Americans are American? Is it that Créole culture has persisted?  The Créole voices I hear, especially from the men, sound so African to me.  “Martinique is French, Guadeloupe is African”, several people have told me in the last couple of weeks. To me, what little I have seen of Martinique has a strong African flavor. Perhaps I would see more of the remnants of Africa in the American South.

I relax on the balcony terrace, dining on a baguette tuna fish sandwich washed down with a glass of 2 euro rosé while watching darkness drape itself over the bay (“night coming on tenderly/black like me”) and catching up with my internet word games.  Yes, Eve, those Caribbean frogs are here, animating the velvety night air with their hollow-wood xylophone voices.  I’ve been reading Glissant and articles from Tropiques before falling asleep.  I look forward to my dreamlife here.  Glissant is right: realism doesn’t work in the Caribbean. My eyes need to adjust if I am to learn anything. 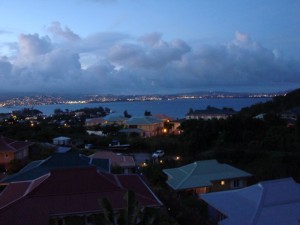 One Response to Adjustment of Vision