The Introduction to Cultural Anthropology and Hispanic Folklore FYE is listed as writing intensive. I knew this going into the course, but that didn’t stop me from having a small panic attack upon the realization that we would be responsible for handing in a 20-page paper by the end of the course that would count for a large portion of our final grade. I’ve written one 20 page paper before, but spent about 6 months working and re-working it. That’s one of the beauties of the block plan, 6 weeks is 6 months when you are learning so intensively.

My assigned topic was the religious folk art of Peru, which both excited and confused me. I’ve always been captured by the bright colors of Andean folk art, but I was under the impression that we were focusing on the American Southwest, not South America. I didn’t know where to begin with such a huge topic. I began searching for sources, but it proved to be harder than expected. My focus was too broad and my searches for Peruvian religious folk art would ultimately bring up folk art in general or ancient religion of Peru.

We set off on our journey along the Rio Grande and I began to pester my professor. How did any of this have to do with Peru? When would I find information on my topic? How could I possibly narrow down a focus from such a huge field? He assured me that it would be worth the wait, and soon enough I would have more information that I could process and the other students would be jealous of my topic. Sure enough, upon arrival at the International Museum of Folk Art in Santa Fe, New Mexico I was surrounded in the Folk Art of the Andes. I drew many parallels between Peruvian folk art and the folk art of the Pueblos we studied.

I was captured by tiny metal figures, known as milagros. Milagro is spanish for miracle and the small votive offerings serve as payment to the gods for kept promises and fulfilled wishes. The devotees leave the milagros at altars or on religious sculptures as a public declaration of gratitude. The figures are made into different images to represent the miracle that has been granted. A person may purchase a house milagro if they have had good fortune in moving into a new home. The milagros represent a connection between the devotee and a higher power. They are a physical representation that miracles happen. 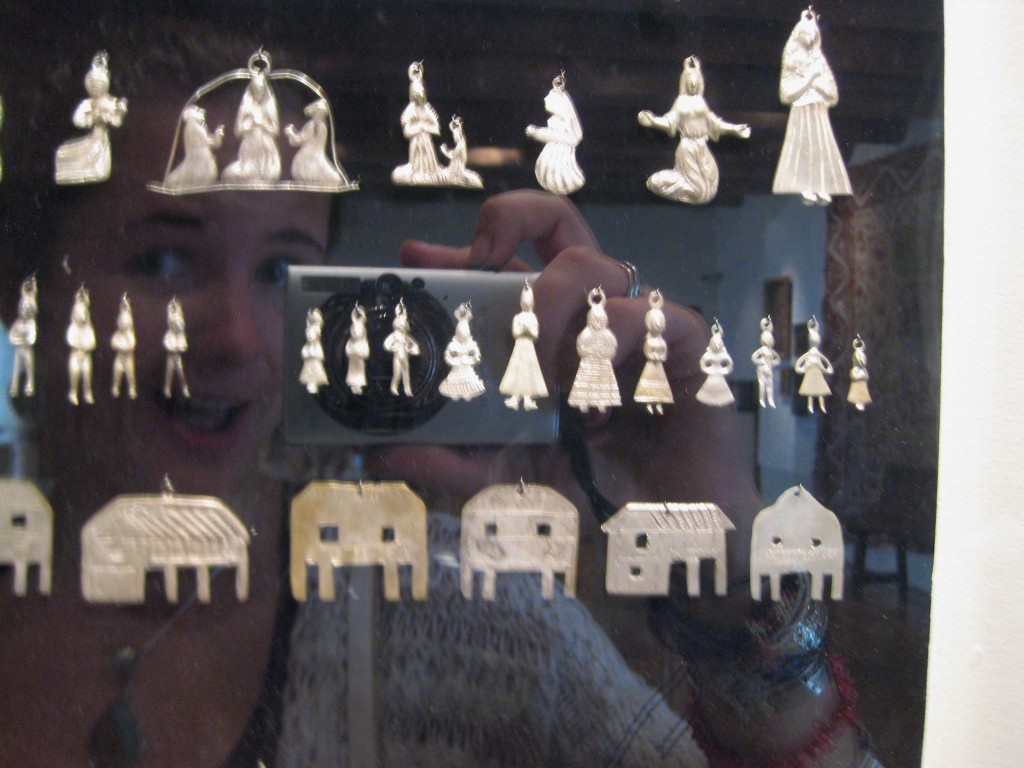 Here’s a picture of me and some of the milagros I saw in the  museums we visited. Having written the 20 pages for my final paper, it’s time to edit and re-edit. I’ve been using the various forms of resources on campus and I feel a lot of support to make this paper strong. I had an appointment with the writing center and met with my professor one-on-one last week. This week I will take their comments and suggestions and work them into my paper and meet with a fellow student to exchange papers. I feel really connected to these little miracles and have been inspired by their implication on a global level. Many cultures and societies through out history have used similar votive offerings. Regardless of religion, we are all spiritual beings and it is comforting to feel we can reach out to some higher power when it comes to the many things that are out of our hands. This paper and cultural analysis has inspired me to sign up for Topics in Religion: Miracles for my 6th block course. Miracles happen!