Have you ever heard of a bowerbird? I certainly had not until our third night at Catamount when Marie showed us all a video about this intriguing family of birds. In short, they are a family of birds who create remarkably intricate bowers, or nests, in order to attract a mate. We learned that the plainer their feathers, the more elaborate their bowers. Once the male successfully lures the female to his bower, he then performs an elaborate mating dance, which oftentimes involves showing off certain key features of his bower, and from there the female decides if she would like to fly off into the woods with her new suitor or by herself. In the mean time though, the male must closely watch his bower out of fear that another male bowerbird may come and vandalize his space to increase his own chances of winning the female.

I happened to arrive at the showing of the documentary a few minutes after it had started because I had forgotten to bring a headlamp and struggled to make it to the bathhouse and back in time for the start of the movie. Rookie mistake. I thoroughly enjoyed the documentary, but I had no idea how it related to our class…until of course the movie ended and I learned that our class of 33 was going to break into small groups of all males and all females and build our own bowers.

At first I will admit that I was skeptical. The plan was to go off into the woods with nothing but a roll of hemp and build a bower that would attract a mate. In other words, on the final day of class at Catamount, we were all going to go around and see each other’s bowers. At the start of the 5-hour bower-building event, several of the boys’ groups grabbed the rolls of hemp and ran off into the woods with them. While our group was not as amused as the boys seemed to be about the trickery, we decided that we were better off without the hemp as it would force us to make our bower entirely out of natural resources.

We found an area with two half-fallen trees and decided to stake our claim on it. We got to work on moving fallen aspens and collecting aspen leaves. Within an hour the four of us had gotten into a pretty steady rhythm and flow. We realized in between adjusting sticks so that they were just so and placing leaves in their perfect places that we were acting much like birds do. We finished in a little over four hours and stayed close to our bower for the remaining time, protecting it from other mal-intending bowerbirds in the vicinity.

In short, the five hours passed in a breeze. Did we, a group of college-aged girls, really just spend five hours in the woods collecting sticks? Worse yet, did we enjoy it? The answer was an obvious ‘yes’. The last time any of us had had this much fun in the woods was in elementary school. Nobody regretted it.

When judgment day rolled around, our class shuffled around the woods from bower to bower, being serenaded by mating dances, and being surprised by our creativity. Each bower was so different despite the fact that we all had access to pretty much (I say pretty much with some bitterness in my voice, boys) the same materials to work with. Some bowers were forts that gave you beautiful views to a lake, some were perfect circles that made you feel like you were a part of your surroundings, and others were teepee-like structures that made you feel like you were a kid again.

Through this exercise, we learned to question why the world around us is filled with such differently designed structures despite having access to similar materials. We also realized that each of us has the power to create something if we put our minds to it. Creativity gives form to shape, and creativity reminds us how to see the beauty in the world around us. 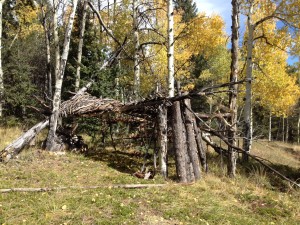