John’s last post outlined most of what we did during First Week, but let me update you on Friday’s class, because it was awesome! We’ve been studying a lot of political theory (and practice) and we’re just starting to get into what for me is the most fascinating part of the “art of insurgency”: the potential for insurgency in art.  Yesterday, we had our first set of performances. The assignment was to create a performance that reinforced and/or challenged hierarchy. The results were varied, but uniformly very cool.  There was a modern dance performance about the Cold War, a Brechtian illustration of discrimination at the airport, an audience-participation heavy piece about the changing means of production in a PB&J factory, and a rendition of Orwell’s Animal Farm using tableaux.  These performances brilliantly illustrated many of the political science principles we’ve been learning about.

We’ve been discussing the ways in which various resistance movements appropriate the dominant norms of their cultures for their own ends. For example, Asmaa Mahfouz posted a vlog that helped spark the recent Egyptian revolution. Her call to action embraced patriarchal norms; she insinuated that men were not real men if they failed to participate in the protest movement.

My classmates’ performance about airport discrimination engaged this dynamic on a much smaller scale. In their performance, a character is discriminated against for wearing traditional Muslim garb. He then takes off his shoes and lifts them up, showing them to the TSA agent. The TSA agent interprets this as the Muslim man’s compliance with airport security norm of taking off one’s shoes. However, in many Middle Eastern countries, showing someone one’s shoes is the ultimate sign of disrespect. The Muslim man in this skit is thus appropriating dominant norms for his own resistant purposes in the same way that Asmaa Mahfouz was.

We’ve also studied the ways in which small, everyday acts of resistance can eventually build up to turn into a movement. In the performance about the PB&J factory, the “abused worker” character sneaks a taste of the peanut butter when his supervisor isn’t looking. This type of theft was common in Eastern European “Communist” countries, and it built momentum for regime change.

Here’s a picture of the “PB&J Maker” that ultimately replaced human labor in the performance: 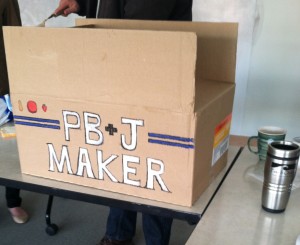 We also learned a lot on Friday about the history of modern dance. I’m so excited to further explore the connections between these kinds of revolutionary (and traditional) aesthetic practices and revolutionary movements!