We presented our second round of group performances today. The assignment this time was to do a site-specific performance with a strong intention, one that would “intervene with social order, perhaps even political space.”

My group realized that two of our members, Anya and I, both had experience figure skating. We designed a performance in which we acted as figure skaters and our third group member, Chris, acted as our coach. We went to the ice rink during a morning figure skating practice session and did a performance in which Anya and I broke the norms of figure skating in multiple ways (the wrong movements, the wrong music, the wrong clothing, skating as a pair with each other instead of with men, and a general failure to be appropriately ladylike and graceful). Chris, as the coach, then repeatedly tried to put us back in our place. We wanted to draw attention to the ways in which the overall institution of figure skating enforces gender in harmful ways, and encourages abusive coaching practices. It was scary to do this in front of figure skating coaches, skaters, and rink staff, but I do think that our performance sent a message.

The next group had everyone in the class write a political slogan we disagreed with, and then go out on the street corner and protest. For me, that felt really uncomfortable and messy, but it made me think hard about the performative aspect of protesting. The next group had us “protest” with signs that said things like “Smile, it’s a beautiful day!” and “Just saying hi!” We earned a lot of smiles, waves and honks, and it felt like a really positive way to interfere with social space.

Similarly, the next group had us hand out flowers and give compliments to strangers downtown. This, too, made us feel good and like we were connecting with the Colorado Springs community. The final group sent out a few people to collect signatures for a petition that had no content. They would offer people candy if they signed, but would not tell them what the petition was for. They got some signatures, but not a lot. I thought that this, similar to the first protest, said a lot about the performativity of political processes.

Here’s a picture of our whole class in the park downtown after all the performances: 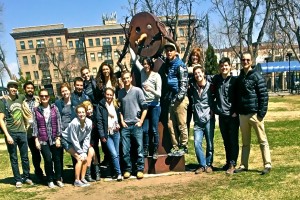 We also took our Serbian language test today. I think I managed to learn to read Cyrillic just in the nick of time!

Now we go to Serbia! But for most of this week, we weren’t so sure we would be able to go. The pilots on Lufthansa, one of the airlines we’re flying, are going on strike, so our original flights were cancelled. The process of trying to re-arrange everything has been stressful for our whole class. As it stands, the class flies out tomorrow through a re-routed flight. I will fly out a day late, on Friday, through a different flight. (I joined the class late, so I had a different plane ticket, but my original flight was cancelled too.) This whole ordeal has been really frustrating and time-consuming. But the pilots’ strike is exactly the kind of performative political action we’ve been studying and even seeking to imitate. So I feel like I can’t be mad at the pilots. I should support them. But at the same time, I am annoyed…so I feel like this is a reminder for us that political performances, performative politics, etc. are quite disruptive. They interfere with people’s lives. Even our class performances today interfered with rink staff, coaches and skaters, cars going by, and passersby. Some people made it clear that they felt harassed even by the positive signs, flowers, and compliments. And compared to the disruption caused by something as large scale as, say, the WTO protests in Seattle, which we’ve been studying, our class performances were nothing. (It’s important to note that the WTO protests didn’t just cause disruption to the organization they were trying to disrupt, they also caused disruption to a whole city.) Thus, I think before every action or performance, it is crucial to ask, “Does the good of the message I am trying to convey outweigh the bad of the disruption I will cause?”

Well, I should probably start packing! The next time I blog, it’ll be from Serbia (unless I get bored in the Denver, Boston, or Munich airports).