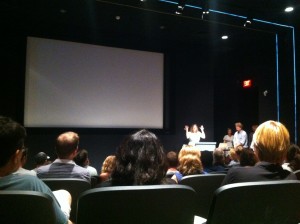 Waiting for my film to show up on the big screen was absolutely terrifying, and as I looked at the other students’ faces, I could tell they were doing a pretty awful job hiding their terror too.

I exported my film at about 6:00 for the 7:00 screening. That’t not okay. I told myself that I would finish the film at 4 pm, like we were supposed to do, but sure enough with titles and credits, I found myself sweating in my chair as my film became one of the last ones to export. I kept having flashbacks to my freshman experience of not being able to export my film in time for the screening because of technical errors. It’s an absolute nightmare to throw away weeks of work for no reward.

Instead of eating a nice dinner, showering, and dressing up hours before the screening, I left the editing room at about 6:40 to run back to my house, shower, throw on my jacket in a fury of sweat and run back to the editing room with my shaving cream and razor in pocket. With about 3 minutes until the screening, I ran into the bathroom, slapped some shaving cream on my face, and hurriedly cleaned myself up as I ran into the theater seeing a lot of the dancers there anxiously awaiting the screening. I couldn’t believe I made it, but the anxiety began to set in. The theater was packed, and worse, these were people I cared about who were seeing it. I said my hello’s and made my way to the front row to join the rest of the class.

So far, my diet that day consisted of two mini-powdered donuts, a cookie, and maybe some water. I didn’t sleep the night before, and napped for an hour outside the editing lab before beginning to edit again in the morning. I was surprised to be standing up, and my eyes were a little bit too wide open to seem normal. With each new film I cringed hoping it wasn’t mine, wondering where in the lineup I would fall. Multiple times I thought I was coming up only to see with relief it was my classmate’s.

When I saw my first dancer on screen it was actually okay. And even better, I liked my film. I should have been absolutely sick of it at that point, but hearing the audience laugh when they were supposed to, gasp when they were supposed to, and applaud at the end made me love it. Its a little ego trip, but I have been looking forward to that ego trip the whole class. It’s the little moment of glory that makes all the delusion worth it.

Having people approach me in congratulations at the end was exhilarating. I was having a little bit of a hard time focusing for sure; my eye-locking capability was sort of like I was staring into an indistinguishably deep black hole with no focus point. My composer and crew members all enjoyed it too, which was relieving; I felt such a responsibility to highlight their hard work. The food at the reception vanished by the time I finished talking, which was frustrating. I got in one brownie. But it was fantastic.

Each time I make a film, I start at square one. I know I will have moments where it is awful. Where it is amazing. Where it is mostly awful. But somehow I have fell in a strange love relationship with the pain of filmmaking, and thankfully have come out of each film with a new desire to make another one that’s better. There definitely is a necessary detox period due to lack of sleep and poor eating habits, but it’s all part of it. Soon I will be thinking of a new film, and I will have to forget how awful or how great my last film was and accept that this one will be totally different. At least I know that now.