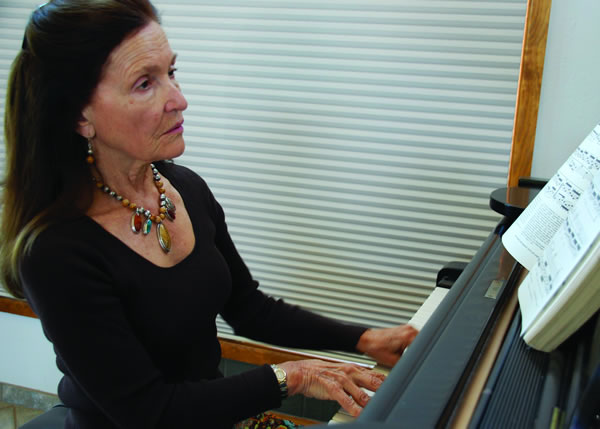 Jo Garner Boatright ’57 is a petite woman who has been called a “lioness of the keyboard.” When she sits down at one of the three grand pianos in her Buena Vista, Colo., home, it’s easy to see why. Her hands are blurs as she unleashes her power and sends sound soaring.

It all started in Sterling, Colo., where her parents listened to classical music and her mother taught her the piano. Jo soon surpassed her mother, so they sought out Max Lanner, head of the Colorado College music department.

“He taught in Denver every other week, so my mother drove me 240 miles, round-trip, every other week all the way through high school so I could have lessons with him. Of course, she arranged the scholarships so I could go to Colorado College,” Boatright recalled.

“In the music department, every single person was really outstanding. They didn’t have any ‘weak sisters,’ so to speak.”

Boatright married soon after earning her bachelor’s in music in 1957, then she and husband Harvey ’53, a flutist, left for Boston so she could pursue her master’s at the New England Conservatory. There, she realized how rigorous CC’s curriculum had been.

In 1960, the Boatrights moved to Dallas, where Harvey joined the symphony and Jo began teaching at local universities. They raised a daughter, Camilla, now a cellist in Denver who often performs with her parents.

Boatright won accolades throughout the world and co-founded the Walden Chamber Music Society, but one of her career highlights was working with renowned Hungarian pianist Lili Kraus.

“Something was wrong with my playing. Everyone else thought it was ‘great, wonderful, blah, blah,’ but I knew deep inside that something was lacking. This woman — I had listened to her since I was a child. I thought, ‘She knows something I don’t.’ I had a full-time teaching job and was performing all over the place, but I humbled myself. She was a real mentor of mine.”

Boatright pays that forward, using her skill and passion to encourage young musicians.

“We have not kept up our music education in the public school system. We’re now past the second generation of no music. So I’m on a little bit of a mission.”

The Boatrights built their dream home in Buena Vista, overlooking the Arkansas River, and moved in 2003. They designed it for performing — the living room holds 80 people — and host a piano retreat every summer. They also help fund CC’s Harvey E. Boatright Scholarship, named for Harvey’s father, a 1907 graduate.

Most of the Walden musicians have second homes in the area, so the society is now based there.

“We’ve been in the schools and do what I call drive-by concerts,” Boatright said, laughing.

This dynamo started hiking at age 50. So far, she’s summited 46 Fourteeners, which she compares to performing music. “And then, when you get to the top of the mountain, it’s like finishing the piece as best you can for the moment. It’s a wonderful feeling, giving a performance.”