Nietzsche’s Enlightenment: The Free Spirit Trilogy of the Middle Period 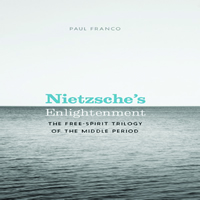 While much attention has been lavished on Friedrich Nietzsche’s earlier and later works, those of his so-called middle period have been generally neglected, perhaps because they are perceived to be inconsistent with the rest of his thought. Franco argues that the three works that make up the philosopher’s middle period, “Human, All too Human,” “Daybreak,” and “The Gay Science” present a
more favorable attitude toward reason, science, and the Enlightenment, thus marking a sharp departure from Nietzsche’s earlier, more romantic writings and differ in important ways from his later, more prophetic writings.