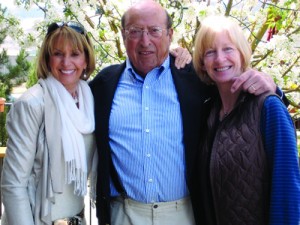 During the April 2012 State of the Rockies Conference, (l to r) Marcia McNutt ’73, Geology Professor John Lewis, and Melissa Walker ’72had fun recounting the many adventures of their 1970 geology class that encompassed the very first two blocks of the Block Plan.

Walker, class of ’72, first discovered the Colorado outdoors when she was nine years old and traveled with her siblings to the Cheley Colorado Camps on the border of Rocky Mountain National Park. Melissa grew up in Minden, La.

“Its director, Jack A. Cheley, was on the board of directors of CC,” she says. “Since my brothers Rolle ’69 and Winston ’70 liked CC so much, it was the only college I applied to. Luckily, I got in.”

“My sister (Priscilla Walker Engeln ’73) started CC the next year, so we all graduated within five years.”

CC’s Block Plan allowed Walker more opportunities for discovery and ultimately changed her life’s path. “My plan was to major in English, which I did, but the Block Plan brought the fabulous distractions of the block breaks where my friends and I could take off on adventures.”

Walker and her friends spent their breaks backpacking in the San Juan Mountains and the Grand Canyon, skiing at Steamboat Springs, and bicycling to Aspen.

She particularly remembers the fall of 1970, the year the Block Plan started. “I was one of the lucky students who encountered geology first-hand in Prof. John Lewis’s two-block geology class.”

Lewis scoured Colorado with his class, investigating landforms, rocks, high-mountain mines, and fault lines, while camping out and sampling autumn apple harvests along the way.

“One night when we were camping out on the Grand Mesa somewhere south of Rifle, Professor Lewis rousted us up and out of our tents. It was snowing. Getting snowed in was a real possibility, so we broke camp in the middle of the night and navigated the narrow dirt road to a lower elevation along a paved highway,” Walker says. “I’ll never forget what we had for breakfast in Paonia. We shared a bushel of apples — still the best apples I’ve ever tasted.”

After graduating, Walker completed her master’s in teaching at CC and taught English in Honolulu, Steamboat Springs, Colo., and in the San Francisco Bay area, but she says that career path “never seemed quite right.”

Then, when she was 29, she walked into Bear Creek Nature Center in Colorado Springs and realized she had found her calling.

She began working in various naturalist positions, where her life of discovery continued.

“When I was working on the exhibit plan for the 1995 Visitor Center for Garden of the Gods Park, I was researching which dinosaurs most likely lived in the region during the Jurassic Period,” she says.

Her research led to paleontologist Ken Carpenter at the Denver Museum of Nature and Science who remembered seeing something in his files about a dinosaur skull at the Yale Museum that had been discovered in the park in the late 1800s.

Walker located the skull and the Denver Museum staff arranged to have it brought back to Colorado. Upon examination, Carpenter realized it belonged to a brand new species of dinosaur. He named it Theiophytalia kerri.

Walker has retired from her work in Colorado Springs parks, but she continues exploring the outdoors and relating her experiences in her Colorado nature blog, naturenarratives.com, and taking bird walks and hikes with her family and friends. She continues to write nature exhibits, serves on the board of Garden of the Gods Park, and informally mentors park staff. She recently wrote and edited a new guidebook for the Garden, which was published in March.

Melissa shares her life with her husband, Les Goss ’72, and son, Paul.