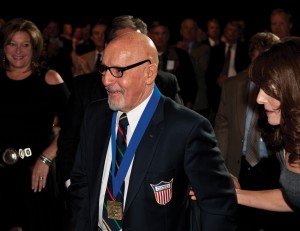 One of Colorado College’s most outstanding student-athletes ever, Andre “Andy” Gambucci ’53, has been looking forward to mingling with elite company on a special evening in Denver this spring.

Gambucci, who learned of his upcoming induction into the Colorado Sports Hall of Fame in October, will be among six individuals bestowed with the distinction at the Marriott City Center on April 17.

Gambucci’s credentials are similarly impressive. Born and raised in the hockey hotbed of Eveleth, Minn., he also became a standout center fielder in baseball and a running back in football at CC. He was, in fact, a holy terror on the gridiron. As a senior in 1952, despite coach William Heiss’s habit of taking him out of most games early, he broke the legendary Dutch Clark’s school record with 16 touchdowns and finished fourth nationally in scoring.

“I easily could have had twice as many touchdowns that season,” Gambucci said. “I’d score two or three quick ones, then get pulled out. Some games I’d just go up and shower.”

He emerged as Rocky Mountain Conference MVP and a unanimous all-RMC selection that fall.  On the ice, in addition to helping the Tigers reach the NCAA playoffs in each of his first three seasons, he skated on the 1952 U.S. Olympic Team that took silver in Oslo, Norway.

He has been inducted twice into the CC Athletics Hall of Fame — individually in 2004, and in 1998, as a member of the 1950 national champion hockey squad. He also is enshrined in the Colorado Springs Sports Hall of Fame.

He turned down an opportunity to try out for the NHL’s Boston Bruins after graduating from CC, and instead went to Italy to play and coach. Upon returning to Colorado Springs, he launched a 22-year career as an on-ice official in the Western Collegiate Hockey Association — a job that never won him many popularity contests. He once had a pep band at the old DU Arena removed for playing “Three Blind Mice,” was hit over the head with a purse by an elderly woman in the stands, and even carried from the ice a live piglet with his name painted on it.

“I really wanted to take him (the piglet) home to my kids,” recalled Gambucci, now 85. “But some guy stole him and I was heartbroken. . . . But, really, I took it all with a sense of humor.”

Away from the rink, Gambucci built a very successful insurance business, eventually serving as senior vice-president and director of marketing for Acordia of Colorado from 1982 until 1995. After retiring, he continued as a consultant for Acordia Mountain West Inc. into the mid-2000s.