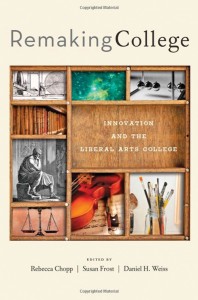 This collection of essays by college presidents and other leaders in higher education asks a fundamental question: In light of rapid environmental changes and increasing calls for higher education to make access to college more affordable and to do more to prepare students for specific careers, what is the role of the American residential liberal arts college? President Tiefenthaler’s chapter, titled “Economics and Affordability,” co-authored with the president of Vassar College and the treasurer/vice president for finance at Swarthmore College, looks at the economic and financial data of higher education in the United States and the challenges it faces.

Life as Art: Aesthetics and the Creation of Self 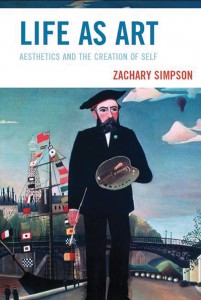 The book brings the resources of contemporary aesthetics since Nietzsche to bear on the problems of how one integrates the aesthetic emphases of meaning, liberation, and creativity into daily life. By linking together the aesthetic and ethical accounts of critical theorists, phenomenologists, and existentialists into a coherent view on the artful life, “Life as Art” shows the ways in which much of contemporary Continental theory has been concerned with alternative ways of constructing one’s life. Seen as a unified phenomenon, life as art signifies an active attempt to create a life that bears the resistance, openness, and creativity found in artworks.

The Parallel Lives of Women and Cows: Meat Markets and Seeing White: An Introduction to White Privilege and Race 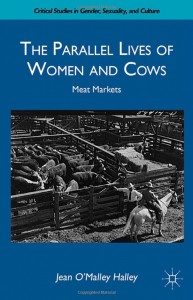 In “The Parallel Lives of Women and Cows,” the author weaves together a social history of the American beef industry with her account of growing up in the shadow of her grandfather’s cattle business. Halley, a sociologist teaching at the College of Staten Island of the City University of New York, juxtaposes the two worlds and creates a link between the meat industry and her own experience of the formation of gender and sexuality through family violence. 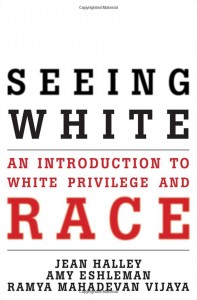 “Seeing White” is an interdisciplinary textbook that challenges students to see race as everyone’s issue. Drawing on sociology, psychology, history, and economics, the book introduces students to the concepts of white privilege and social power and is designed to help break down the resistance some students feel in discussing race. Each chapter opens with concrete examples to help students approach issues from a range of perspectives. Early chapters build an understanding of privilege and power, and key theoretical perspectives include cultural materialism, critical race theory, and the social construction of race.

Tales from a Revolution: Bacon’s Rebellion and the Transformation of Early America 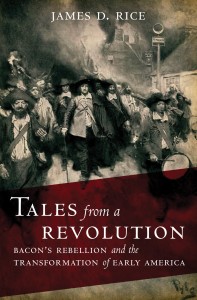 In 1676, Nathaniel Bacon led a rebellion against Virginia’s Colonial governor, William Berkeley. Fueled by colonists’ fears of Indian attacks, Bacon and his followers used disputes between frontier settlers and Doeg Indians to rationalize an offensive against other nearby tribes. Berkeley’s preference for a more measured approach became justification for a political and military rebellion against his rule. Rice, who teaches at the State University of New York in Plattsburgh, argues that this critical event in American history helped to create the Old South and the convergence of slavery, westward expansion, and issues of race. 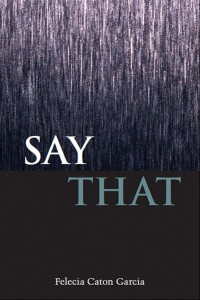 This is the first book of poems for Caton Garcia, who teaches writing and cultural studies at Central New Mexico Community College in Albuquerque, N.M. Love, loss, memory, and the hidden lives of a range of speakers and characters are the interwoven themes of the book. “Say That” is divided into two sections: The first presents the lived experience of the speakers, while the second strips the story to unveil a dream-life where memory and history haunt the lives they lead. 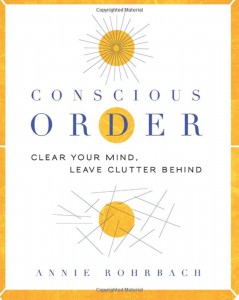 Subtitled “Clear Your Mind, Leave Clutter Behind,” this book by veteran professional organizer Rohrbach shows readers how to use the power of their thoughts, words, intentions, and imagination to create the order they desire. Rohrbach has spent many years exploring and implementing the power of conscious choice and intention, empowering herself and others to claim and create a more balanced life. She loves inspiring people to make conscious choices about what to let go, what to keep, and where to put it, so they feel better about themselves and their surroundings.

You Are a Badass 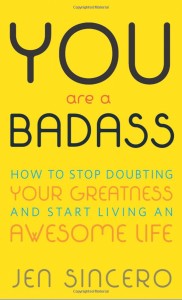 The subtitle says it all: “How to Stop Doubting Your Greatness and Start Living an Awesome Life.” Bestselling author and world-traveling success coach Sincero serves up 27 bite-sized chapters such as “Your Brain is Your Bitch” and “My Subconscious Made Me Do It”; this refreshingly blunt how-to guide takes readers on a wild ride to their own transformation and helps them create the relationships, careers, health, and general all-around awesomeness they desire. By the end of the book, readers will understand why they are how they are, how to love what they can’t change, and how to change what they
don’t love. 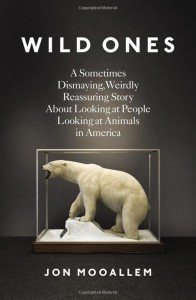 In this New York Times Notable Book of 2013, Mooallem grapples with the complex realities of conservation by looking at polar bears in Manitoba, butterflies near San Francisco, and the supervised migration of whooping cranes between Wisconsin and Florida. He has seen his daughter’s world overflow with animals, butterfly pajamas, and appliquéd owls — while the actual world she’s inheriting slides into extinction. “This is not a book about wilderness; it’s a book about us,” notes The New York Times Book Review, while praising the way in which Mooallem blends reportage from the frontlines of wildlife conservation with a cultural history of animals in America.

The Last Iteration of Dexter Maxwell 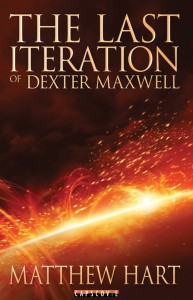 In the first book of a planned science fiction epic, Hart, a history major and the author of six technology books, takes a bold look at the consequences of current developments in technology. The book, set in fictional Grenver, Colo., features Dex, an orphaned sewer rat who has snarled the system with some of the most brazen stunts of the 22nd century. But after a botched stunt, Dex wakes up a foreigner in a brutal, bizarre underground city. Soon Dex is on the run, hunted by vicious assassins and mixed up in a deadly plot a millennium in the making — and with the fate of two worlds at stake. 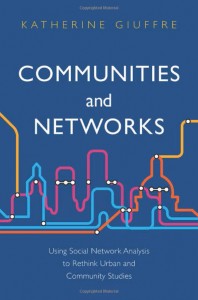 The subtitle, “Using Network Analysis to Rethink Community and Urban Studies,” explores the heart of the book, as Giuffre takes the science of social network analysis and applies it to key issues of living in communities, especially in urban areas. Whereas previously a community was thought of as a neighborhood, technology and social networks have turned that definition on its head. Network analysis provides a new perspective on community life, with sometimes surprising results and insights, as in the case of the Salem witch hunts. 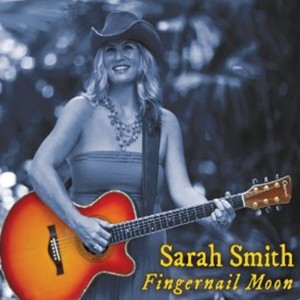 Influenced by Texas Country and Americana, Smith’s first full-length studio album contains 10 original songs and one cover tune. Says Smith, who divides her time between the Virgin Islands and Texas, “I have been recording this album in Austin for nearly three years — when I get a little time and money together, I go into the studio. I began writing some of the songs over 10 years ago.” Glenn Fukunaga (The Dixie Chicks, Robert Plant) and Ray Rodriguez (The Mystiqueros) appear on six of the 11 songs; bassist David Carroll and drummer Paul Pearcy play on the remaining five. Brendon Anthony (Pat Green Band) appears on fiddle; Lloyd Maines (Joe Ely Band, Terri Hendrix) on pedal steel and dobro; Chris Gage (Jerry Jeff Walker, Jimmie Dale Gilmore, Red Willow Band) produced the CD and appears throughout on guitars, harmony vocals, accordion, and electric piano. 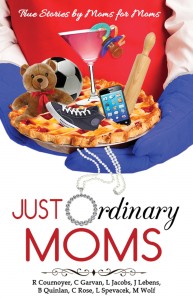 Subtitled “True Stories by Moms for Moms,” the book is a collaboration between eight women who know each other from book clubs, play groups, and community activities. One evening, while chatting about kids, someone said, “We should write down these stories about being moms — we’ve all got some great ones,” and the rest is history. The book contains 16 true stories and two poems that span the experiences of motherhood from labor to school days to the precarious teenage years. A portion of the book’s proceeds is donated to charities that benefit women and children.

Disability and Passing: Blurring the Lines of Identity 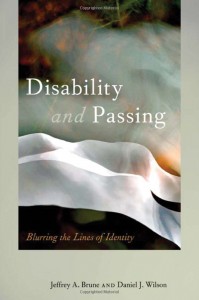 This is the first anthology to examine the phenomenon of “passing” among people with disabilities. Passing — an act usually associated with disguising race — also relates to disability. Whether a person classified as mentally ill struggles to suppress aberrant behavior to appear “normal,” or a person intentionally takes on a disability identity to gain some advantage, passing is a pervasive phenomenon. The book explores the intersections of disability, race, gender, and sexuality as these various aspects of identity influence each other. The book also argues that the line between disability and normality is blurred, and discusses the role of stigma in decisions about whether or not to pass.

Dear Beast Loveliness: Poems of the Body and Down at the Dino Wash Deluxe 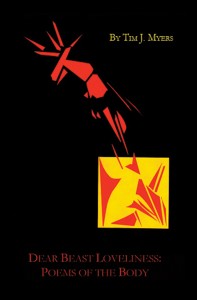 Myers has been nominated for two Pushcarts, published more than 120 poems, and won a first prize in a national poetry contest judged by John Updike. In “Dear Beast Loveliness,” he explores the riches and struggles of the most fundamental of human experiences: having a body. Some of the most profound paradoxes known involve one’s physical nature: On one hand, we know the body with absolute intimacy; on the other, perceptions and values vary widely. There’s also the ancient drama of fulfilling bodily needs and urges, with the concomitant struggle in how one thinks and feels about such things. Myers says it’s the fascination with those issues that led him to write these poems. 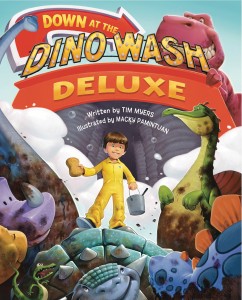 Aimed at a preschool to Grade 2 audience, “Down at the Dino Wash Deluxe” explores a very different question: When muddy dinosaurs need a bath, where do they go? To the Deluxe Dino Wash, of course! A different friendly dinosaur, correctly identified, gets an individual scrub and shampoo by several children, be it by hose, scrub brush, or sponge. Turns out T. Rex is the fearful one, afraid of getting soap in his eyes. The colorful illustrations are humorous and packed with details, and correct pronunciation and facts about the eight dinosaurs appear in the back pages.