Sleep Research Wakes Up the World 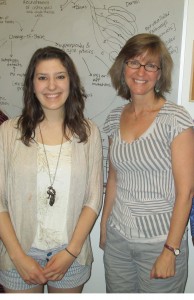 Christina Draganich ’12, left, and Psychology Professor
Kristi Erdal are gaining attention for their study on sleep.

A study by Psychology Professor Kristi Erdal and Christina Draganich ’12 is making people sit up and take notice. Students who were told they got a good night’s sleep — even if they didn’t — performed better on tests measuring their attention and memory skills than those who thought they slept poorly, according to Draganich’s research.

A paper about the study, “Placebo Sleep Affects Cognitive Functioning,” was published in the Journal of Experimental Psychology: Learning, Memory and Cognition. The study was based on two experiments with 164 students that Draganich did for her senior thesis in neuroscience. The study has been picked up widely by media, including The Independent in the United Kingdom, The Atlantic, Salon, and “Good Morning America,” among others.