Glenn Gray taught philosophy at Colorado College from 1948 to 1977. He was born May 27, 1913, in Pennsylvania and died Oct. 30, 1977, in Colorado Springs. He was a renowned member of our faculty as a teacher and a scholar. He was also a revered graduate of Juniata College in Pennsylvania, honored by the college’s year-long celebration of his life and work in 2013-14. As one who had known him from 1965 to 1977, and as editor of “Something of Great Constancy,” a festschrift (published tribute) in his honor, I was invited to give a lecture at Juniata based on my acquaintance with him over 12 years. This essay is adapted from my talk at Juniata.

Glenn was the author of books on Hegel, on liberal arts education, and on violence, and translated some of Heidegger’s works into English. His most celebrated work was “The Warriors: Reflections on Men in Battle” (1959), which enjoys a permanent, unique place in the literature on war. It gained greater prominence when a new edition was published with a foreword by Hannah Arendt, who admired the work greatly. Readers of “The Warriors” who also knew Glenn will agree with her: “What must strike the reader to begin with in a book about war is its peculiar stillness, the softly reflecting tone of his voice that never teaches or preaches but tells us in the greatest modesty what the author remembers.” This is true. As an outstanding faculty member, Glenn’s voice was important in campus deliberations, but he was not an activist in faculty politics. His true vocation was to pursue the life of the mind and to teach students. He exhibited a remarkable degree of serenity in facing the vicissitudes of life.

This is striking since he knew that his health was precarious because of chronic heart problems, which led to his untimely death just before his formal retirement. He approached his own mortality inspired by Plato’s Socrates: The philosopher must make a friend of death in order to put aside the distracting anxieties that come from preoccupation with survival. This was reinforced by his experience of the death and destruction of World War II, which shaped the rest of his life.

Glenn entered the army as a private in May 1941, after being drafted the same day he was informed of his doctorate in philosophy from Columbia University. He saw service in North Africa, Italy, France, and Germany in a counter-espionage unit. He was awarded a battlefield commission as second lieutenant during fighting in France and was discharged in October 1945.

In “The Warriors,” he says: “Socrates, who as a soldier, had looked death in the face more than once, could not conceal his curiosity about the experience of dying and the possibility of a transformation of life beyond death . . . the love of knowledge . . . can impel men . . . to regard death as a boundary they should transgress in order to see whether it in turn may be bounded. For them the unknown is neither uncanny nor frightening. It is above all, interesting.”

Glenn also took as his task to be at home in the world. This meant coming to terms with the way the world is even as one seeks to improve the conditions in which one operates. War had taught him that there is much in the world that one should not want to be at home with. Thus, we must live in the tension between our limitations and our aspirations, recognizing this as the unavoidable condition of human existence. The destructiveness of the 20th century taught him to abandon ideas of inevitable progress even though he did not abandon the hope for a transformation of our situation. Hope is what remains after disillusion with mundane hopes. To understand our condition, he thought, was the fundamental task of liberal education, and he wrote a fine book about this: “The Promise of Wisdom” (1968). His wartime experience dramatized what it meant to be deprived of the chance to think amidst horrifying destruction of life and nature. How was he to make up for his part in this? He said in “The Warriors”: “Such a soldier will discover his future mission in life to be as far removed as possible from the destructive work of war. He will be absorbed in the reconstructive, the simple, and the truly humane arts . . . a life devoted to strengthening the bonds between men and between man and nature. He will not be in any obvious way a reformer or a social worker or a preacher. But among his friends he will be known as extraordinarily gentle, sane, and wise.” It is clear that this passage was an exhortation to himself.

To understand our condition, he thought, was the fundamental task of liberal education.”

This reinforced his aim to defend and advance liberal learning. He was skeptical of our preoccupation with the ever-expanding quest for knowledge as information which turns the world into a museum of bygone and passing achievements. He worried that we know more and more except about the meaning of life. The question of meaning haunts us: What does it matter to me? What is the sense of all this? We come to college, he thought, to learn the distinction between acquiring knowledge and the quest for meaning. To address such questions is the vocation of the teacher, the inquiry at the center of liberal learning, the defining feature of the humanities which make reflective thought the heart of the matter. The college experience is initiation into a lifelong commitment to make sense out of the fundamental experiences of life. Thus he co-founded, in 1953, Freedom and Authority, the oldest, most venerable interdisciplinary liberal arts course at CC.

We come to college . . . to learn the distinction between acquiring knowledge and the quest for meaning.”

Glenn believed that a college is a place of liberal learning set apart where, for a few years, students are encouraged to cultivate habits of reflection without having to plunge into the ineluctable duties that must overtake them; it offers an interval to explore the promise of wisdom. He worried about the equation of liberal education with exposure to a wide array of disconnected subjects, and about the emphasis on research at the expense of conversation between teachers and students. The life of the mind is not merely skillfulness; it is the choice of a way of life. Self-reflection, he wrote, enables the student “to transcend himself and become . . . able to envision an ideal that goes beyond any existing condition . . . Criticism is a form of creativity that is inescapable if all our groups are not to become human ant heaps.”

Being at home in the world includes making our time and place a more satisfactory place to be at home in. True reflection tempers and disciplines, without removing, our enthusiasms. Glenn’s modesty as a thinker, inviting serious dialogue about the fundamental tensions of our existence, is a model for teachers and students pursuing together the vocation of liberal learning. In joining this pursuit, we show gratitude for what he — and many others — did for us, for liberal learning, and for Colorado College. 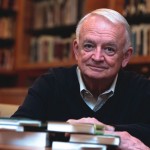 Tim Fuller, professor of political science, served as CC’s acting president from August 2001 to January 2002. Before that, he was dean of the faculty and college from 1992 to 1999. He chaired the Political Science Department from 1985 to 1991.