As the world watched and waited for news about the deadly Ebola crisis that threatened to spread beyond West Africa over the past year, Beth Gaddis ’99 was using all of her education, skills, and experience helping Liberia fight the outbreak.

“It has been very humbling,” Gaddis said by email in January from Liberia’s capital, Monrovia.

“But over the past few months I’ve witnessed humanity at its best: working side-by-side with dedicated Liberians fighting the disease for their country; meeting the ever-inspiring Ebola survivors who fought for their lives and won; and now, as we re-emerge from the darkest days, seeing the returned smiles of kids in the street and much of life returning to normal, a more resilient normal,” Gaddis said.

Having an Air Force father, the psychology major said she always knew she wanted to work overseas, but “I surely never would have imagined that I would be responding to the world’s largest Ebola outbreak in history.”

Gaddis is a population, health, and nutrition officer with the U.S. Agency for International Development Foreign Service. She joined the Foreign Service a few years after earning her master’s in international public health at Tulane University. She’s been in Liberia since June 2012; previously, she worked on strengthening health systems in Armenia for two years.

“You never know what to expect,” Gaddis said about her work, but what she found herself in the midst of this last year was definitely a surprise — one that became very personal and sometimes overwhelming.

“I remember the early days of the outbreak. The first wave in Liberia was in March and April, and we had so few cases that we were able to talk specific details about each and every one,” she said. The first Ebola case to enter Liberia was a sick woman who traveled in a shared taxi from northern Liberia, which borders Guinea, to the county where Monrovia is, along the Atlantic coast.

“She arrived very late in the evening so everyone slept at the taxi driver’s house. The next day she took a pehn-pehn (motorbike taxi) to her home, then another one to a health clinic,” Gaddis said. That woman died from Ebola, and through her travels she had potentially exposed many people who then had to be tracked.

“One of the pehn-pehn drivers fled out of fear of dying and there was a week-long search for this one contact that at times felt more like a soap opera. Who would have ever imagined that just a few months later we would have hundreds of cases, and thousands of contacts to trace?” Gaddis said.

“I can remember sitting in a room with some of the world’s greatest Ebola experts and everyone was at a loss for what to do. This crisis was unprecedented . . . historic, and unlike anything anyone had ever seen before. But we had to do something, and definitely continued to learn what to do as we went along,” she explained.

Gaddis said her established relationships with the Liberian government allowed her to quickly shift her duties to helping advise the Ministry of Health. She helped write the first response strategy, coordinated delivery of protective equipment from the United States, and reported on the situation to the U.S. Ambassador to Liberia and the USAID headquarters in Washington, D.C. She also worked with the USAID Disaster Assistance Response Team, the U.S. Centers for Disease Control and Prevention, and the World Health Organization, as well as local health-care organizations to design a plan, gather supplies, and implement training for triage, infection prevention, and control measures in Liberia’s health-care facilities.

“She’s somehow more equipped to deal with the stress and heartache that an epidemic like that causes than most people. She’s a rock. She’s worked with other diplomats, foreign and domestic leaders, policy makers and even celebrities to do all she can to raise awareness about and to eradicate Ebola,” Colorado Springs high school English teacher Erica Rewey ’99 said about Gaddis. The two have been close friends since living on the same floor in Loomis Hall during their first year at CC.

Time magazine recognized the value of what Gaddis and others have been doing to fight Ebola with its annual Person of the Year designation in December.

“For tireless acts of courage and mercy, for buying the world time to boost its defenses, for risking, for persisting, for sacrificing and saving, the Ebola fighters are Time’s 2014 Person of the Year,” Time editor Nancy Gibbs wrote in the magazine’s announcement. 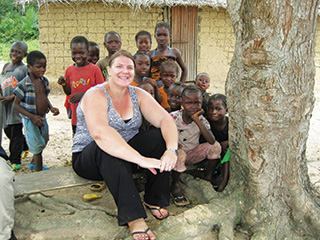 Beth Gaddis ’99 enjoys working with children in Liberia. Her assignment there ends in May, and after a break, most likely spent visiting her U.S. home base of Denver, she heads to Pakistan for her next tour with the U.S. Agency for International Development.

As of March 8, 2015, the World Health Organization reported a cumulative total of 24,282 Ebola cases including 9,976 deaths in Guinea, Liberia, and Sierra Leone, likely propagated from a case reported in rural Guinea in December 2013. For Liberia, the totals were 9,343 cases including 4,162 deaths, with an average of 50 confirmed positive cases reported per day at the height of the outbreak. Liberia had no new confirmed cases in early March.

Gaddis said she can look back and feel good about the work she and others have been able to do. “It really has shown what a difference we can and did make,” she said, noting that her undergraduate experience gets some of the credit.

“I know my time at CC prepared me to expect the unexpected and tackle the unprecedented. . . . CC taught me how to think critically and adapt, and that more than anything has helped me through this outbreak,” she said.

Gaddis hasn’t worried about contracting the disease since it’s spread through personal contact, and she hasn’t been in the “hot zone” or providing direct patient care. She describes her living conditions as relatively nice, given that much of Liberia is still rebuilding from more than 10 years of civil war that destroyed piped water systems, buildings, and power lines. She said boreholes and outdoor latrines are standard for toilets.

“Water is still trucked in and power is by generator so both often are disrupted, but comparably, I live in a very modern, comfortable apartment,” she said.

She’s working to “ensure that the strides we’ve made with building capacity in Liberia during the response are transferred back into the health system in a sustainable way.” She feels the fight against the crisis is still far from over as she works to ensure the impoverished nation has the resources to prevent or better handle another such outbreak. In addition to managing an agreement to provide health-care services in three Liberian counties, Gaddis said her job involves strengthening and rebuilding the country’s health-care system, which was devastated by the war.

“We had seen progress in many areas: Liberia met Millennium Development Goal 4 — reduction of child mortality. . . . But then Ebola hit — and despite seeing some small progress, Liberia’s weak health system was vulnerable and fell prey to the outbreak,” she said.

But she isn’t discouraged.

“I love what I do. Every day I see the results of my work — whether it is to see a woman give birth in a health clinic instead of at home, a child receive all the necessary immunizations, or my counterparts at the Ministry of Health become problem solvers themselves instead of relying on others. It really is rewarding.”

Gaddis sees herself continuing this kind of work. She likes the opportunity of moving to a new country every few years.

“It constantly keeps you thinking and adapting to new environments
and challenges.”