Recent Alumni and Their CC Opportunities

“If I hadn’t taken the opportunity to research with Dan Johnson [associate professor of economics] and Kevin Rask [college research professor in the Economics and Business Department] I would not be where I am today,” said Cassandra Benson ’12, who is in her second year of a Ph.D. program in economics at Cornell University. Benson was an economics major at CC.

After finishing her doctorate, Benson hopes to find a teaching position at a liberal arts college. “Given the experience I had at Colorado College, I want to enable future students to have a similarly impactful college experience.”

Benson was involved in three major types of research projects while at CC.

Her research experience started with her senior thesis work, which looked at factors that influenced college matriculation and completion.

After graduating from CC, Benson was hired as a summer researcher for Rask and Johnson.

“I was one of five students hired to work on issues in higher education. My specific project dealt with fundraising campaigns of liberal arts colleges, specifically those campaigns of our peer schools. And I presented this project to the Colorado College Board of Trustees in Fall 2012,” she said.

The second project, analyzing course allocation at Colorado College based on the point bidding system, was a collaboration with Johnson and Kristina Lybecker, associate professor of economics.

The third project Benson worked on at CC was an extension of her senior thesis, but Benson said that without Johnson’s guidance and encouragement, it certainly would not have continued.

“He was always willing to take on new projects, look at new issues, and tackle new questions. When I was hired as the Econ Department’s technical statistical coordinator, I was given the opportunity to research for an additional year before moving onto graduate school,” she said.

She presented her research at three major conferences. The paper she wrote with Johnson and Lybecker, “Paying for College One Course at a Time: Allocative Efficiency Using the Colorado College Course Bidding System,” was presented at the Academy of Economics and Finance (where the paper won the Award for Best Economics Paper of 2013) and at the Western Social Sciences Association, Benson said.

She also presented her senior thesis work at the American Economic Association meeting in May 2013 along with Esther Redmount, associate professor of economics.

“Without my research experience at CC, I never would have chosen to pursue my Ph.D. in economics,” said Benson. 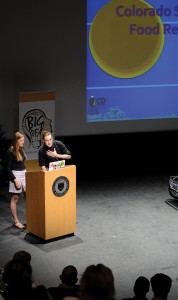 Alex Fitzgerald ’14 is enthusiastic about start-ups and the leg up he got for his career from the Block Plan, the Big Idea, and the CC entrepreneurship class he took. Fitzgerald majored in political science.

“On the Block Plan, the demand of learning something very quickly, oftentimes a subject that is seemingly completely different from what you learned the month before, prepared me for the start-up world where things change quickly and you have to be adaptable and able to learn quickly,” Fitzgerald said.

“Also, in my entrepreneurship class with Jim Parco, we were tasked with forming a business with a team and pitching that business at the end of the class. This class eliminated a lot of the mysticism about starting a business for me. I learned how much you could actually accomplish once you started pushing on doors.”

Fitzgerald saw a five-minute presentation on GetOutfitted at a pitch night organized by Patrick Bultema, executive director of the Innovation Institute. GetOutfitted is an online company that rents ski and snowboard apparel and accessories and delivers them through the mail to customers’ hotels, condos, or anywhere they will be staying during their ski trip.

“At that time, GetOutfitted had a total of one customer. I connected with Julian (Flores, company founder) and began working as an intern. Much of my early work was blogging and conducting market research, both online and in person, on chairlifts, farmers markets, and anywhere I thought I could find a representative sample of potential customers.

“After winning the Big Idea and graduating last summer, I began working a lot more for GetOutfitted while also dedicating some time to consulting with other businesses. I am the marketing manager. A lot of my work is about building our affiliate network, the group of people that recommends our service. I also produce content for our blog and social media outlets. I am somewhat of an in-house PR firm as well, organizing influential people to try our service and tell the country about it. I do a lot of work improving our search engine ranking through optimization strategies.”

Fitzgerald said he hopes CC students get more excited about start-ups. He came away from his teaching experience during CC’s Half Block feeling that this entrepreneurial career path is very accessible to them.

“I have had a few students ask me for help with their Big Idea concepts,” he said.

Allison Stewart ’12, an environmental policy major at CC, applied to the Public Interest Fellowship Program her junior year with only one organization in mind for a summer internship, Volunteers for Outdoor Colorado.

“I applied for the PIFP program with my heart set on VOC, and fortunately was able to enjoy that summer working for VOC, biking to work, developing metrics, calling volunteers, and assisting on outdoor stewardship projects,” Stewart said.

Stewart works for VOC today, and she said PIFP has been an integral part of her career development.

During her senior year at Colorado College, Stewart applied for the yearlong PIFP program, hoping to again work for an environmentally focused nonprofit in Colorado. Unfortunately, the organization she accepted an offer from was transitioning through a merger, and at the last minute no longer had funding for her position.

So Stewart worked with Lani Hinkle ’83, PIFP director, and interviewed with other organizations in a time that jobs were scarce and highly competitive.

“With Lani’s help, we created a new PIFP yearlong position with Green America, a nonprofit dedicated to creating a socially just and environmentally sustainable society by practical, market-based solutions, where I worked for two years,” Stewart said.

In the meantime, Stewart remained involved with VOC as a mentor for its high school outdoor leadership program. She was selected as mentor of the year in 2013, and applied for a field staff position with VOC in 2014. She’s working for VOC as the volunteer and partnership coordinator for the Salida/Leadville U.S. Forest Service Ranger Districts in central Colorado, where she runs the volunteer program, coordinates with partners, and manages several volunteer projects every summer.

“Last year was the first year the Salida Ranger District brought CC students for a New Student Orientation trail-building trip I helped orchestrate. My connections to CC stay strong, and I have the PIFP program to thank for that! And, as a bonus, I have two staff members who are also CC alums, so the legacy continues!”