Built for the Block Plan — and the Planet

Where can you find the largest academic library in the nation that was built to be carbon-neutral and a net-zero energy user?

The library is set to achieve the remarkable energy efficiency designation following a renovation that included the addition of approximately 25,000 square feet of space, which incorporated 12,976 square feet of glass and more than doubled the building’s seating capability.

“The Charles L. Tutt Library, built in 1962 and first dedicated during Homecoming 55 years ago, has been reimagined and rebuilt to meet the evolving needs and boundless energy of CC students and faculty,” says Colorado College President Jill Tiefenthaler.

The $45 million renovation, which garnered gifts totaling $19.4 million, is the largest capital building project in college history. “It is anchored in the strategic plan for the college, ‘Building on the Block,’ which calls for a reimagined library. Its impact on campus is profound, as it serves as the intellectual hub of the campus and brings the CC community together in structured and unstructured ways,”
says Tiefenthaler. 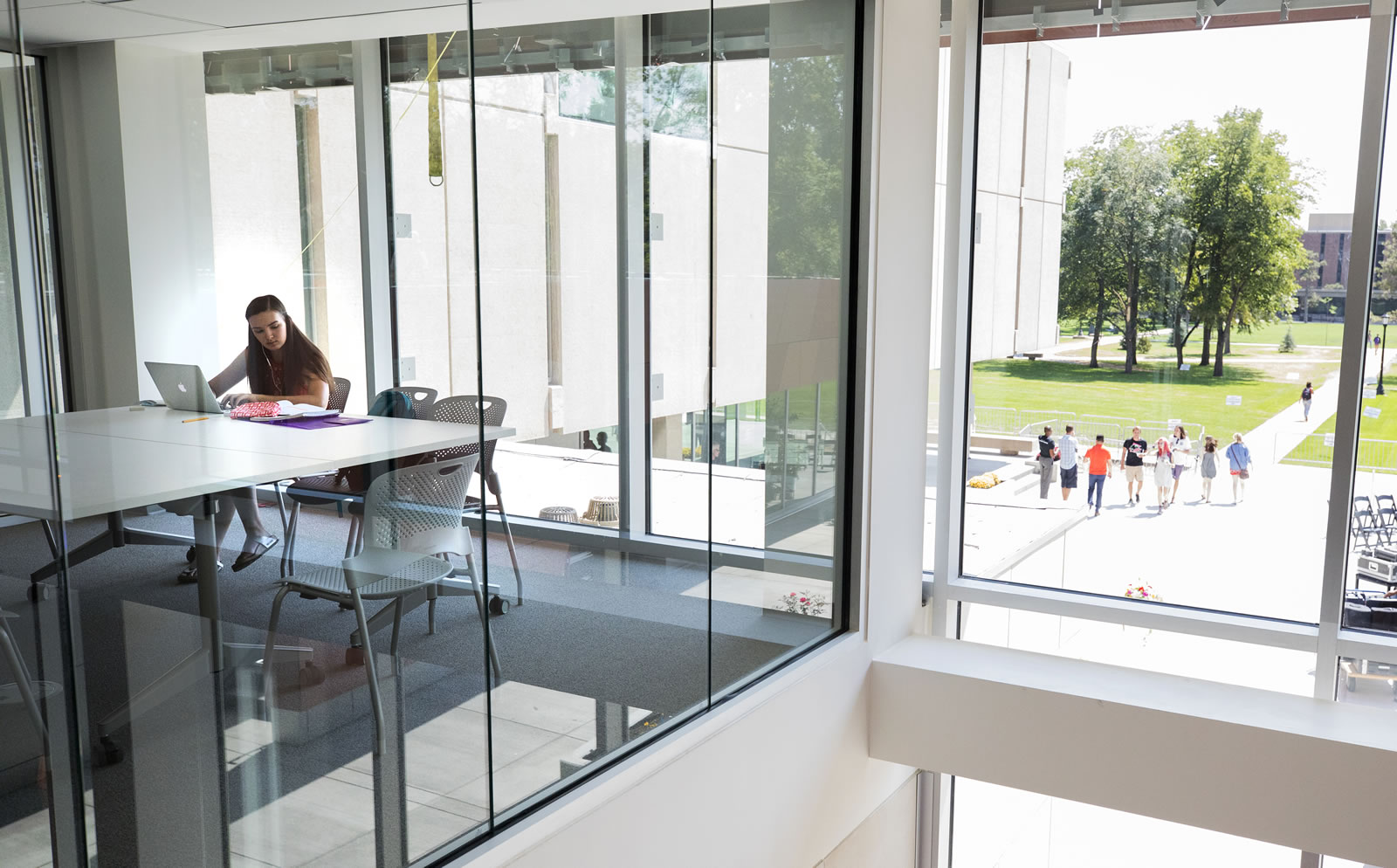 The new Tutt Library already is a huge hit with students, faculty, and staff. The five dedicated classrooms were promptly filled. The Geospatial Information Systems (GIS) lab is a hub of activity, and heavily used by classes ranging from geology to classics to anthropology, as well as the Environmental Program. Faculty members have held office hours on the third-floor terrace, with its sweeping view of the mountains. Nearby Susie B’s café buzzes with community, collaboration, colleagues — and caffeine. And everywhere are students, making the library their own.

“The library is a place where our people can connect intellectually and socially at the center of campus,” says Tiefenthaler. “It is the first library built for the Block Plan.”

Because of the Block Plan, courses at CC — unlike those on a semester schedule — conclude at noon every fourth Wednesday. This means the bulk of the student body is wrapping up projects, assignments, papers, and labs, or studying for finals at the same time, putting simultaneous pressure on library facilities. To accommodate the demand, the new library increased its square footage by 35 percent, to 94,317 square feet, and the seating capacity more than doubled, from 495 to 1,078, with more seating on order to accommodate the uniquely CC “Fourth Week study rush.”

The library is set up “for students to use intensely and as they need it throughout the day and the block,” says JoAnn Jacoby, the new director of the library. “The spaces and services have come together in a uniquely successful, uniquely CC way.

“The library supports the rhythm of the Block Plan, and the students help define how the building feels throughout the day and throughout each block,” she says. 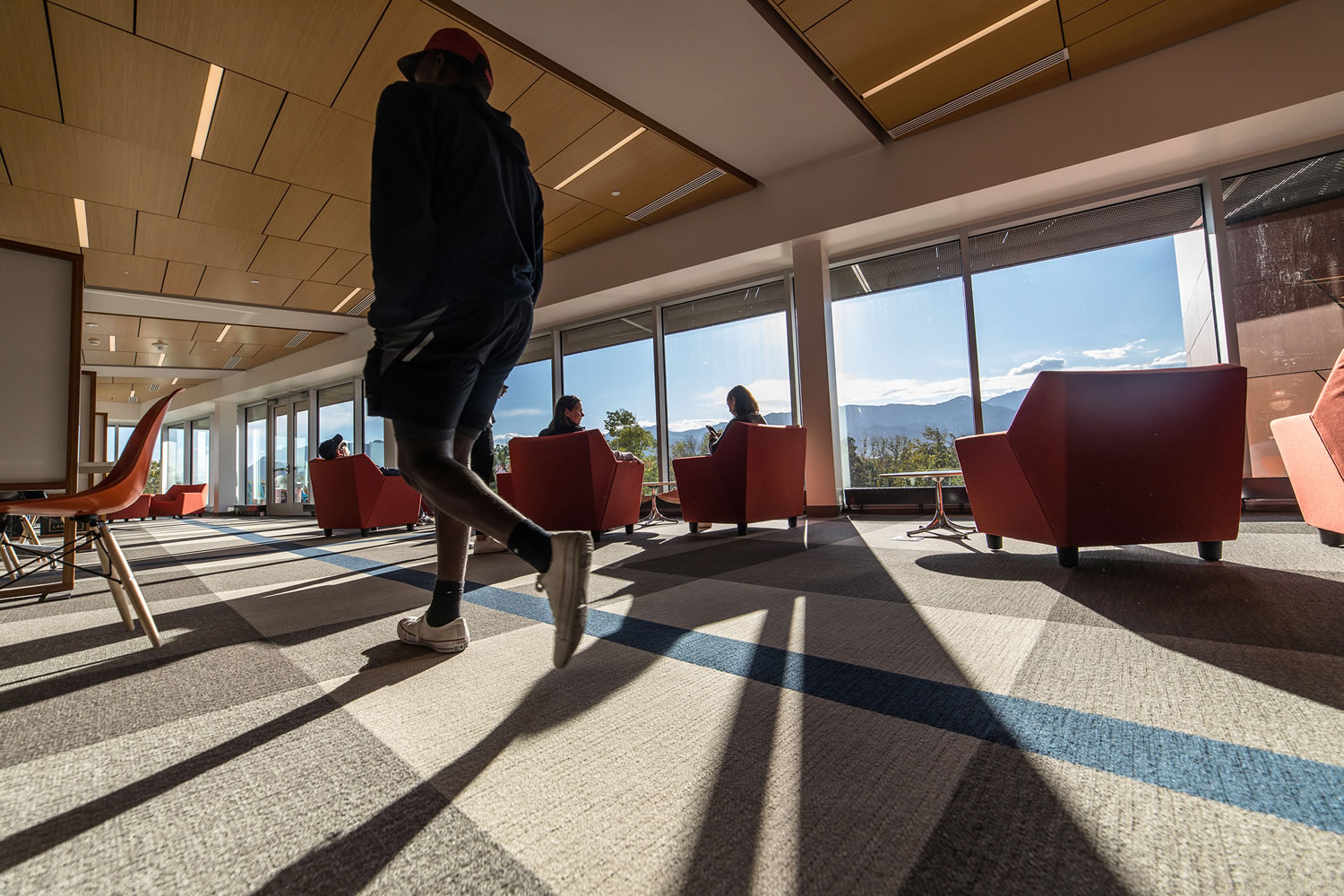 The library has been technologically transformed, with a data visualization lab, space for new and emerging technology, Geospatial Information Systems laboratory, and an experimental classroom equipped with teaching technology. Appropriately, one of the first classes to be taught in the new library was Tiefenthaler’s Economics of Higher Education, which she co-teaches with her husband, Research Professor Kevin Rask.

Faculty and students are able to access collections and information, and communicate with each other, even while off campus during CC’s signature field study and study abroad experiences.

Advanced audiovisual and technology-centric systems, including wireless accessibility to meet current and future demand, are central to the new library as well. Students today — and certainly students of the future — can have up to five personal devices, all of which need to be powered. The new library has that covered, with 1,174 electrical outlets (some of which also have two USB ports) and 232 floor boxes with two outlets apiece for powering mobile devices.

“The library is resource intensive,” says Weston Taylor, CC’s instructional technologist for emerging technologies. “One day at CC is like a week on the semester system, so we have to have the resourcesand high availability to accommodate the students.”

The new Tutt Library is where music major Grace Hale ’20 turned for help with her improvisational piece for Music Professor Ofer Ben-Amots’ Composition 101 course. But Hale wasn’t looking for sheet music or biographical notes on composers. She was seeking help with a virtual reality concept she wanted to try while performing onstage. Although she’s been playing the piano since age 5, she’s new to virtual reality — yet had an innate sense of what she wanted to accomplish.

And Hale’s project did work. She wanted to play an improv piece with her eyes closed, visualizing a landscape that would inspire her music. “But playing with my eyes closed or blindfolded was not enough; it’s boring. I wanted something bigger,” she says. She wanted to see a dazzling landscape while playing; one that would inspire her music — and she wanted the audience to be able to see what she saw. 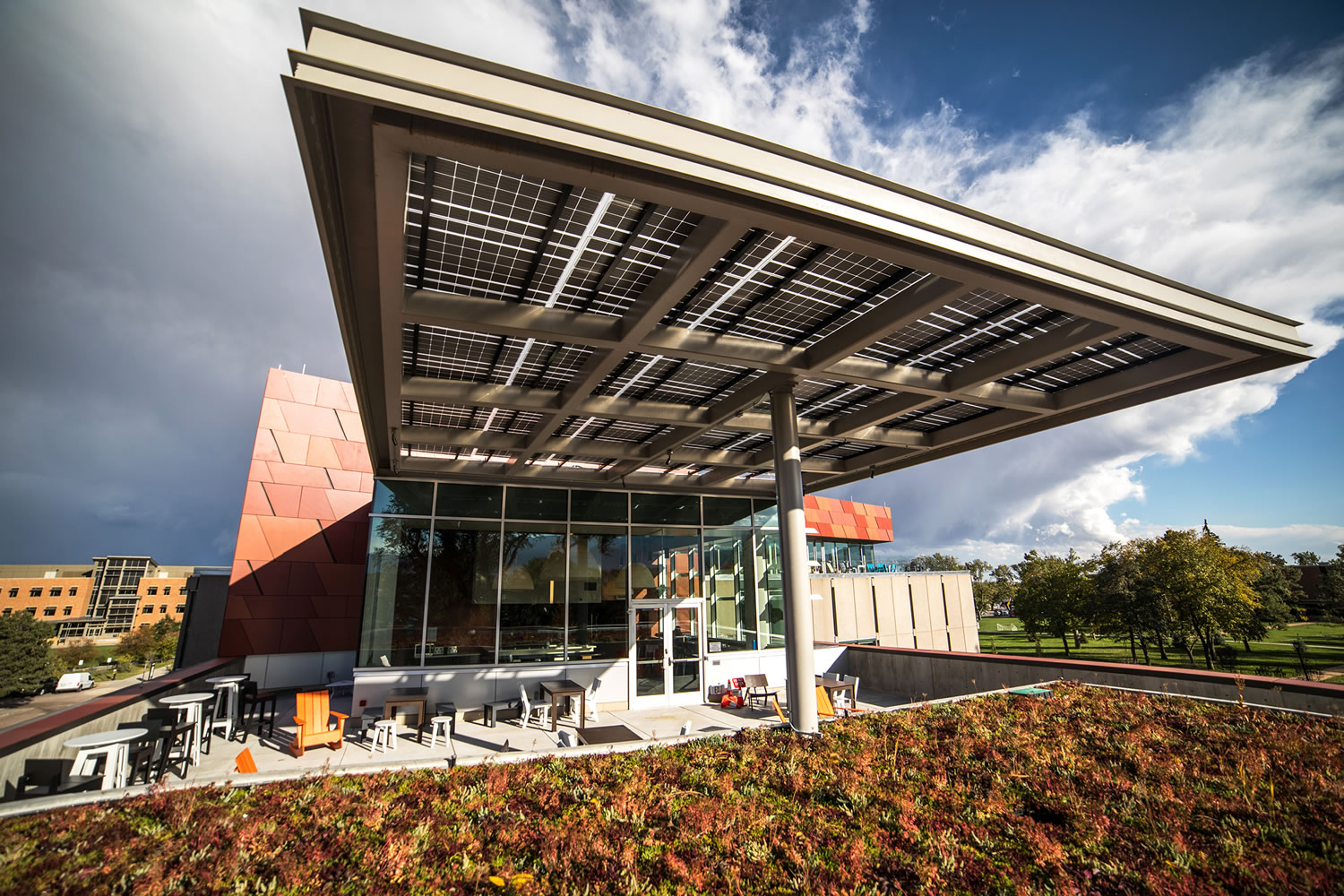 The resources at the library enabled Hale to perform a five-minute improvisational piece on a piano in Packard Hall, wearing a VR headset that displayed the Northern Lights, with the images also being projected on a screen so her colleagues could see what she was responding to with her music.

“Certainly this was a pioneering effort on Grace’s part, to combine music improvisation with VR technology and to integrate it into the final concert of our composition class,” says Ben-Amots. “Grace was very adamant about performing this piece and I am glad she persisted. The end result was an interesting musical journey into a 3D image of a beautiful wintry landscape, which we very much enjoyed.”

“It’s amazing that it actually happened,” says Hale. “Weston was a huge help. Everything fell into place, and I had accessibility to everything, which was phenomenal.”

That’s the goal of the renovated Tutt Library. “The library is focused on student success,” says Jacoby. “The block is an intense schedule, and the library brings everything together in one place.”

In addition to its technological services, the library also is the hub for academic support services, housing the Colket Center for Academic Excellence, Quantitative Reasoning Center, Writing Center, English as a Second Language, thesis support, First-Year Experience Office, Crown Faculty Center, and research librarians — all on the same floor — enabling students and faculty to consult with professional staff and each other.

“You can be confident you’ll find somebody to help you in the library, regardless of what you need,” Taylor says.

“Students can stumble across unexpected surprises in the library, which open one’s mind to other connections and possibilities,” says Jacoby. “That’s key to the liberal arts. It’s opening up new paths, and serendipity is just as important as efficiency. 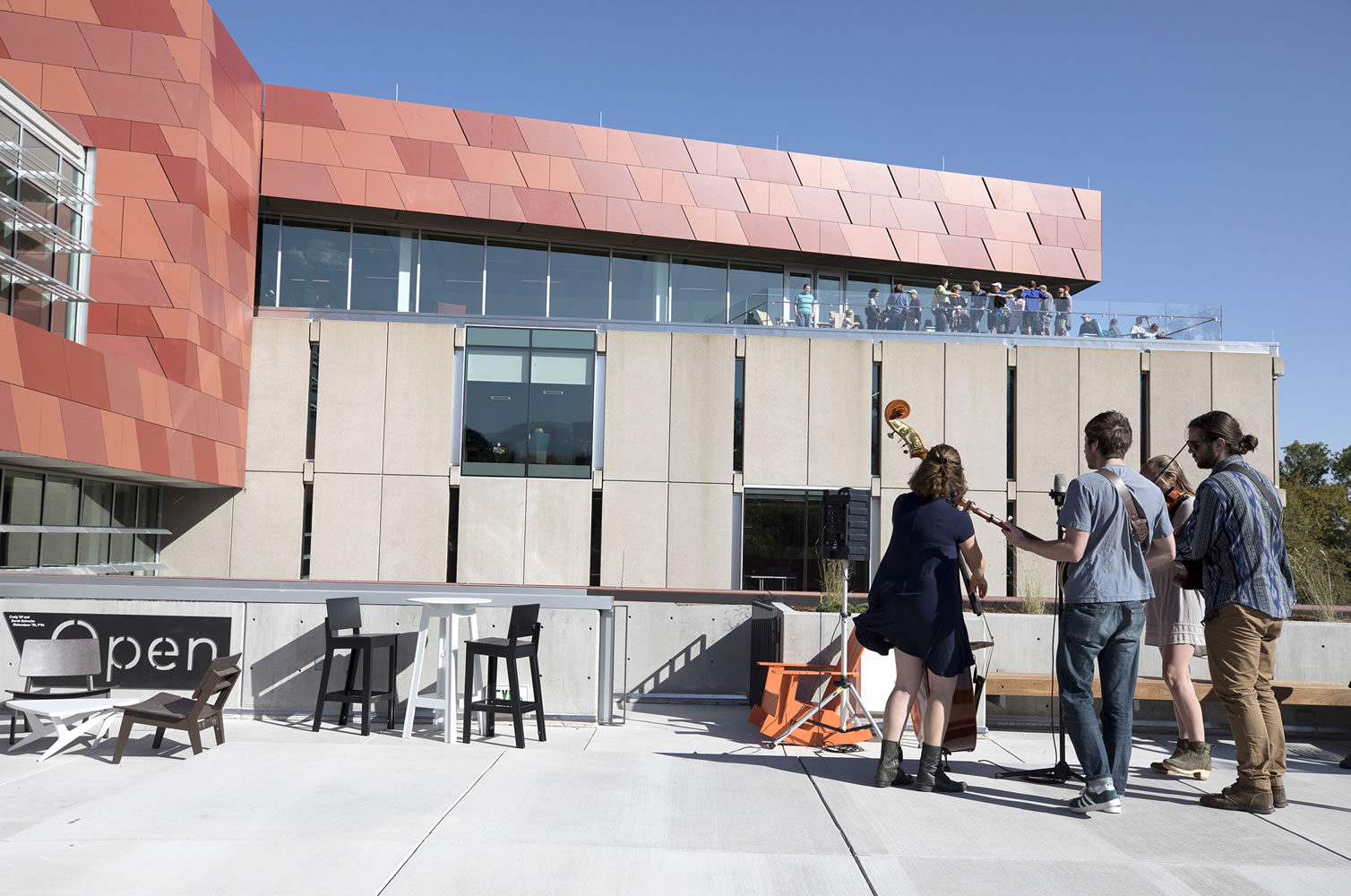 One of CC’s three bluegrass ensembles performs for an audience of visitors on the fourth floor balcony during the library’s open house.

“You can see learning happening here,” she says. “CC was rated by U.S. News & World Report as the 10th best college in the country in undergraduate teaching. This library brings that out in a very public way. You can literally see what the college is all about — learning inside the classroom and the learning and the creativity that happens after class,” she says.

One of the hallmarks of a CC education is collaboration, says Tiefenthaler, noting that the students frequently work together in small teams on projects, to study, conduct research, access digital and traditional resources, and pursue intellectual passions and personal growth. This type of collaboration happens in spaces made for working together — and those spaces abound in the new library.

In one glass-enclosed classroom, Jeremy LeMenager ’20, Matthew Presti ’19, and Christian Fowler ’19 block out a movie assignment for their Spanish 101 class. It’s a cop and robber film, with a slightly noir feel. “It’s really nice to have all these rooms,” says Presti, sketching out scenes on the whiteboard.

On the third-floor terrace, Zhen Loy ’21, Kieran Woerner ’21, Henry Rose ’21, and Kara Thomas ’21 collaborate on their Slow Food in a Fast-Food Nation First-Year Experience course, an inter-disciplinary Environmental Program and Italian course, in which students compare food systems In Italy and the United States. “We come here every day,” Thomas says.

“We use the hell out of Tutt,” adds Rose for emphasis. 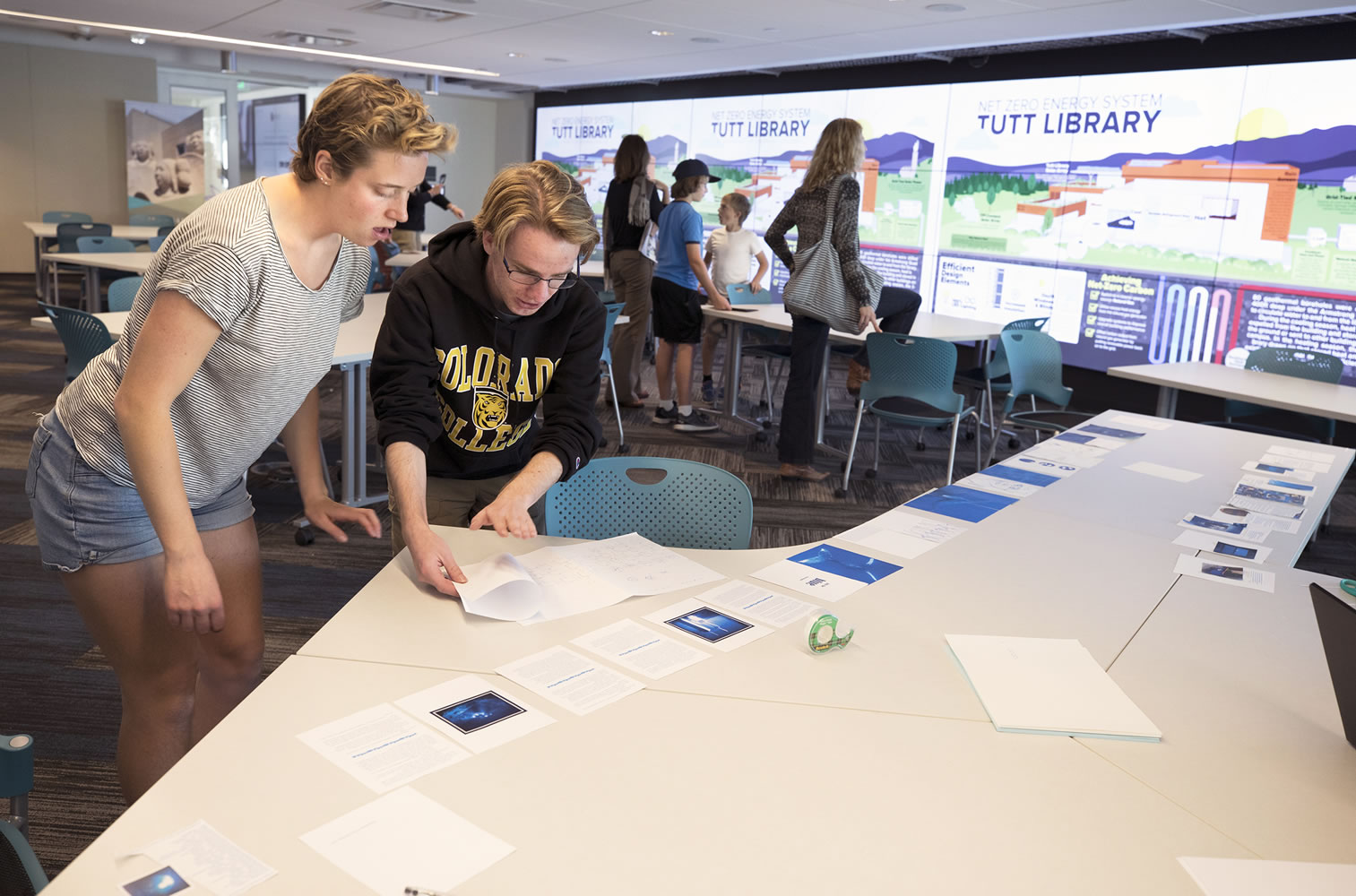 Students work on a final project for class as visitors check out the net-zero display on the Ryan Data Visualization Wall.

Three students in an anthropology class, two in a geology class, and one in a satire class gathered in what they call “the prime room” in the library, a glass-enclosed study room overlooking the library entrance. “It’s nice to come to a place that’s meant for studying,” says Anya Steinberg ’21, one of the anthropology students.

“There are lots of options here, lots of different settings, for the way you want to study,” says Sophie Wulfing ’19, an organismal biology and ecology major, in the library to meet a friend and work on an assignment for a Hinduism class.

Another organismal biology and ecology major, Kate McGinn ’18, says “this is my home,” as she sits at her favorite work station in the back of the GIS lab. Working with Biology Professor Brian Linkhart, McGinn has been studying how owls use their habitat, tracking their foraging patterns early in the evening and late at night, and noting differences from early in the season, when they have no nestlings to feed, to later in the season, when they do. 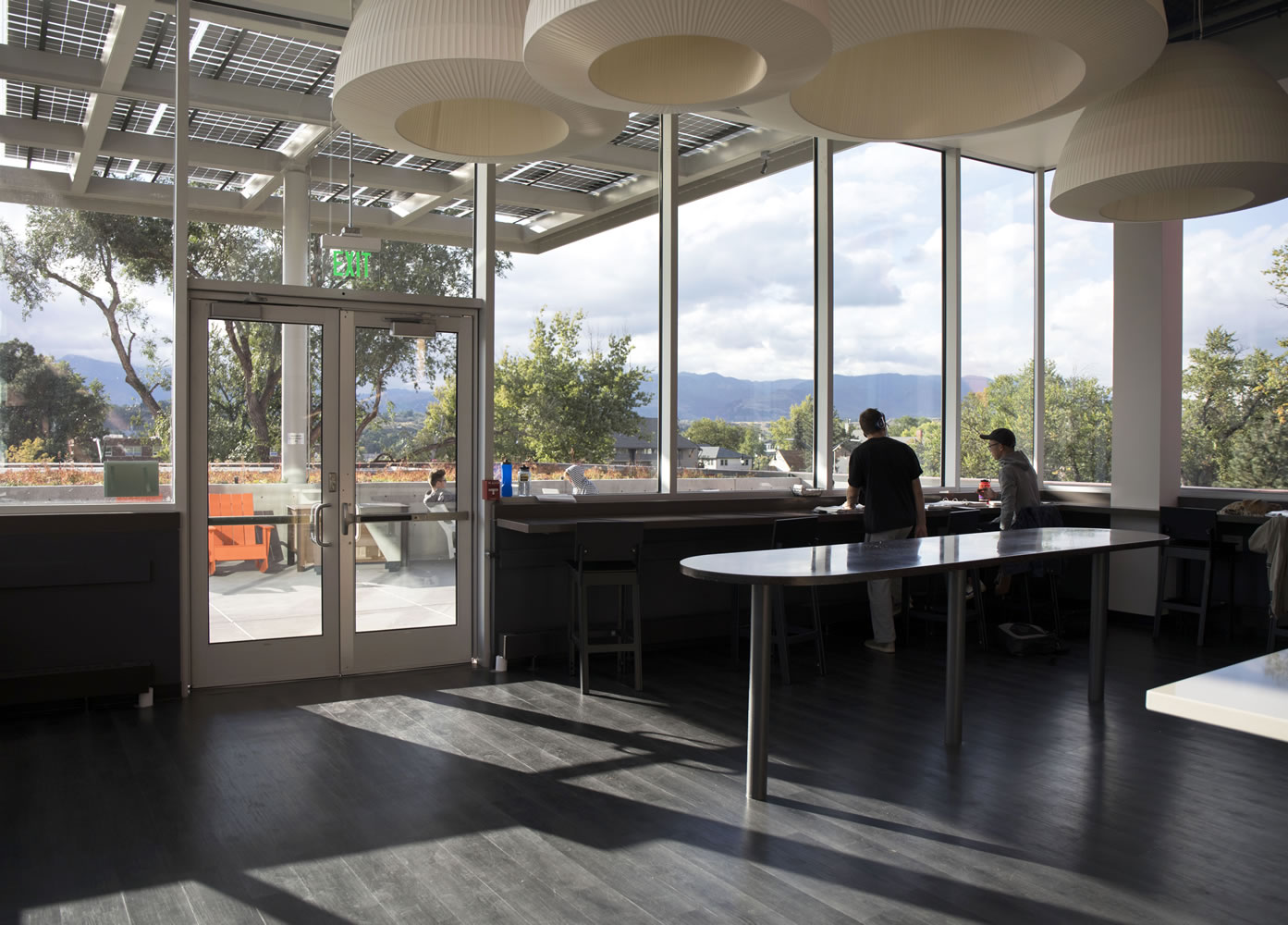 Using tiny backpacks equipped with trackers strapped onto the owls, McGinn has collected the data and is using GIS to dissect the owls’ patterns of movement, determining how much space they use over time and its variations. “Owls have a very complicated relationship with their habitat,” she says. The GIS technology is “an important way to describe this data I’ve collected.”

McGinn presented her research at the Raptor Research Foundation conference in Utah in early November.

One of the students’ favorite areas of the library is the “Tech Sandbox,” an area on the first floor designated by the sign “Class of 1967 Tech Sandbox.”

“It’s just what it sounds like,” Taylor says. “It’s a place where students can build, and play, and make mistakes. They can try new things in a constructive, creative way. And it is like a sandbox; anyone can come up and join in; it’s a shared experience.

“There might be some dissonance, as there is in other sandboxes, but you learn lessons about life,” he says. “When you’re a kid in a sandbox, it doesn’t matter what someone else looks like, they want to play, and it’s more fun to play with them. It’s problem-solving with technology.”

Georgie Nahass ’20, a computer science major, biochemistry minor, and ITS Educational Solutions student intern, frequently works in the Tech Sandbox. “3D printing is the future of a lot of things,” he says.

“It can do some crazy stuff. From making more accurate prosthetics to creating entire houses, 3D printing will eventually change life as we know it. It is still in its infancy, however, so there’s going to be a bunch of cool stuff happening very soon in the 3D realm.”

Daniel Barnes ’21 is planning to make a mouthpiece for his trombone with the 3D printer to use in his trombone adjunct class. Barnes, who’s considering a double major in computer science and music education, says the trombone mouthpiece is “an absolutely wonderful example of interdisciplinary interaction revolving around the resources offered at the library.” 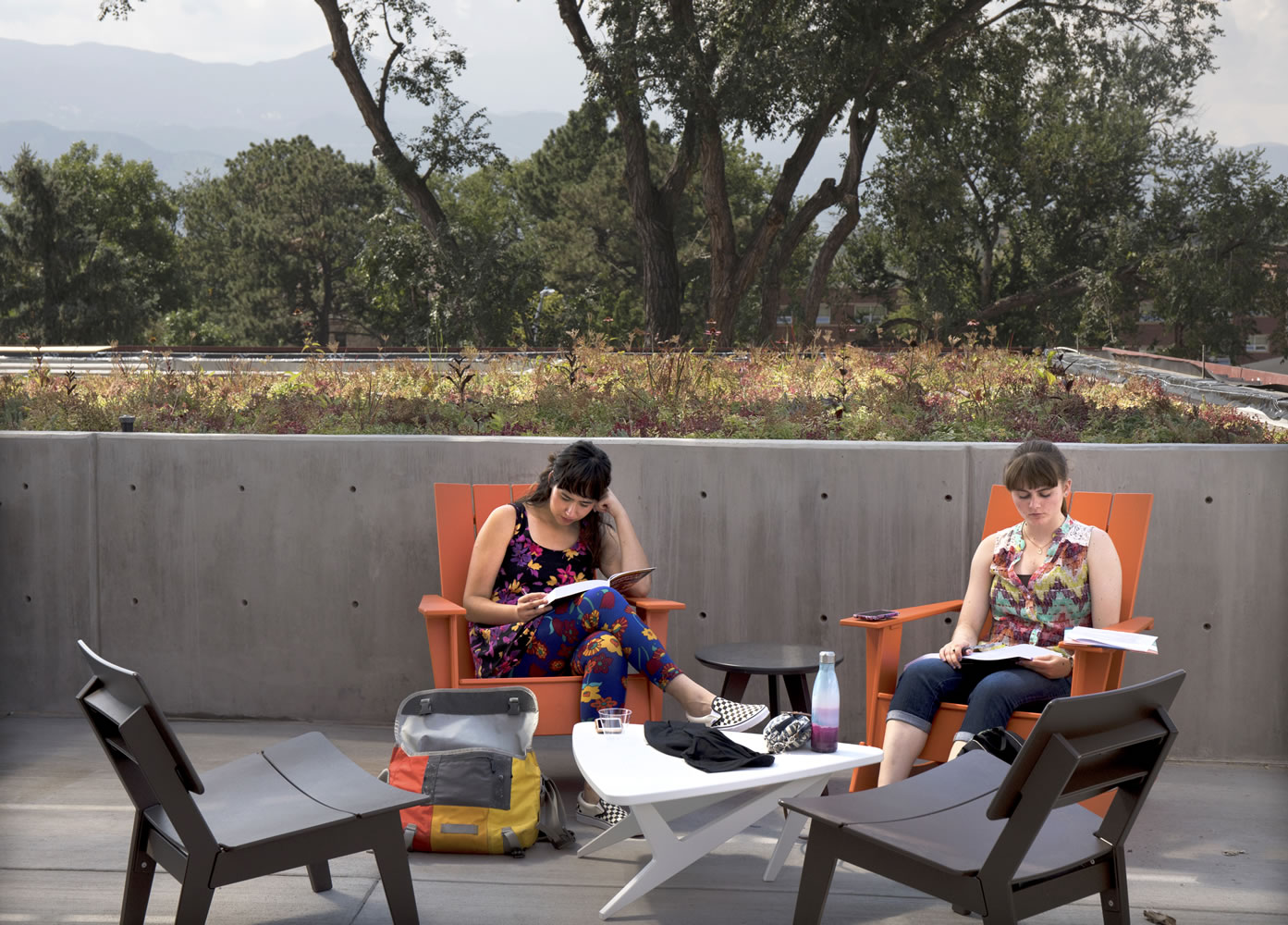 A geothermal energy field adjacent to the library has 80 wells arranged in a grid. The wells, each 400 feet deep and five-and-a-half inches wide, function as a heat exchanger for the reversible geothermal heat pump that provides both heating and cooling in the library. Additionally, a 115-kilowatt rooftop solar array, 400-kilowatt offsite solar array, and 130-kilowatt combined heat and power system are all part of the project. There are terraces on each level and a live green roof consisting of approximately 5,000 sedums.

“I’m thrilled to have a library that’s ideal for both the Block Plan and the planet,” says Tiefenthaler.