From Potter to Protector

First and foremost, Virgil Ortiz is a potter. And this year, he’s the Andrew W. Mellon Artist-in-Residence at the Colorado Springs Fine Arts Center at Colorado College.

But neither of these descriptors tell you that he’s also a storyteller whose complete art portfolio includes fashion, video, film, and glass projects alongside his internationally recognized clay sculpture. 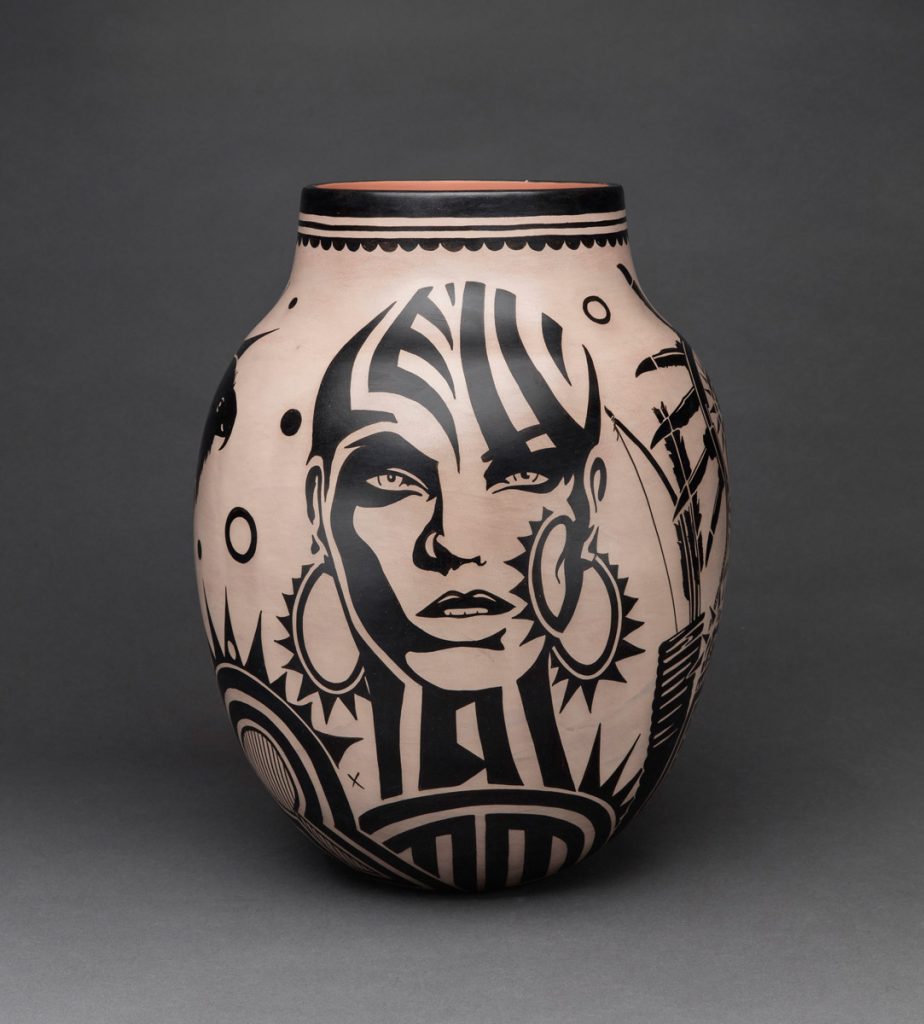 Or that, most importantly, Ortiz sees himself as a conduit for his Cochiti ancestors — both in keeping alive the pottery and art of this Native American Pueblo tribe of New Mexico, and in sharing the history of the Pueblo Revolt of 1680. In what Ortiz calls the “first American Revolution,” the indigenous Pueblo people rose up together to overthrow the Spanish conquistadors who had invaded and systematically destroyed much of their home, their religion, and their culture. The Pueblo people would hold the land, what is now the Santa Fe/Taos area, for 12 years, and are credited with preserving ancient traditions from extinction.

“I’ve been telling the story of the Pueblo Revolt through all different mediums,” Ortiz says. “It’s not taught in our schools. It’s not taught in public spaces. It’s not in our history books. Nothing. So it’s basically been covered up or swept under the carpet because of the genocide that happened to our people.”

His current exhibition at the FAC, “Revolution: Rise Against the Invasion” (on view through Jan. 6, 2019), is a compilation of nearly two decades of work, taking the history of the Revolt and telling it through the lens of Native superheroes in a future world.

“I am embarrassed to say that I was not familiar with Virgil’s work until I saw his show at the Denver Art Museum about three years ago,” says Joy Armstrong, FAC curator of modern and contemporary art. “But I walked into the gallery at the DAM and immediately, it took no time at all, I had a gut reaction to the work that told me this artist has to come to Colorado Springs.”

His futuristic, very contemporary aesthetic appealed to Armstrong personally based on her own interests and expertise as a contemporary curator, but more importantly, she says Ortiz is so profoundly rooted in history and tradition.

“Virgil’s work was a natural bridge between everything that I think our institution represents in terms of honoring and interpreting the past and preserving objects from the American Southwest, but also very much looking to the future and supporting and promoting contemporary artists. There’s a beautiful legacy in his work,” she says.

It’s a legacy that Colorado College students have been able to become a part of, thanks to the Mellon residency, a grant-funded program that supports forging deeper academic connections between the college and interdisciplinary arts. When Ortiz arrived on campus at the beginning of the semester, he brought with him a not-yet-complete exhibition. “I didn’t finish all of the costuming for the mannequins, so when I got here, I was able to work with the students on them. They learned how to drape and make the clothing and make the armor out of foam fabrication,” he says.

Ortiz checks in to see how his video installation is coming together at the Fine Arts Center where his new exhibit of work is showing through Jan. 6. Photo by Jennifer Coombes

Ortiz directs Mateo Parsons ’19 on what he can do to help assemble a window installation for his new exhibit at the Fine Arts Center. Photo by Jennifer Coombes

Kaila Ablao ’20 wheels a pedestal past a bust created by Ortiz at the Fine Arts Center, where several CC students helped with the show. Photo by Jennifer Coombes

Kaila Ablao ’20 adds hair to her sculpture during the Venutian Soldier Bust Sculpting workshop at the Bemis School of Art. Photo by Katie Klann

“It was very nice to see everybody all working together like that. I mean, in Cochiti, it’s always a community thing. Everybody working together. Say a dance is coming up, right? Everybody supports each other, and we’re all there acting as one. So that was the same feeling that I got here. … It’s like bringing the whole family together.”

Armstrong is grateful for the impact that the Mellon grant has been able to have locally. “In terms of being able to bring professional artists to Colorado College and to Colorado Springs, this presents a unique chance for us to allow students and our community an extended opportunity to engage with and to learn from a professional artist, that frankly is pretty rare under normal exhibition circumstances, where we might have a visiting artist here for a week or slightly longer.”

Everyone can “dig in a little bit more,” she adds. Students can learn from and collaborate with the artists. The artists can do student studio and classroom visits, offer gallery talks and workshops through Bemis Art School, and engage in a variety of multidisciplinary ways.

“What’s really exciting about Virgil,” she says, “is that he’s genuinely been a resident of Colorado Springs for the entire fall semester. He’s been really generous with his time, and incredibly accessible and just excited and enthusiastic to engage with anyone and everyone, and participate in as many ways as possible.”

For Ortiz, being at Colorado College for a semester has been a new experience. “I’ve never been in a
college setting, so to be able to go eat with the students at the cafeteria, or visit their studios, it’s pretty cool. …
I never went to school for anything but I always tell people I went to the best school because my mom was a teacher. I learned first-hand, and I learned until the day she passed away.”

Like her, Ortiz will teach until he can no longer — from the feature-length, Pueblo Revolt-themed sci-fi film he’s working on to the clay he’ll always return to: “Using the traditional methods and materials is a dying art form so I have to make sure that stays alive. … When I pass and move on to the next world, I’ll feel successful that I made that connection to the next gen.”