When you walk into the lobby of the Fine Arts Center today, you are walking into a world of art that spans 100 years.

You are following in the footsteps of art luminaries and cultural icons, like Martha Graham, Walt Kuhn, Langston Hughes, Frank Lloyd Wright, Robert Motherwell, Jimmy Stewart, Sydney Pollack, Philip Glass, John Waters, and other diverse talents and personalities from the annals of American art and cultural history who have graced the spaces of this institution.

Established in 1919 in what had been Spencer and Julie Penrose’s private downtown estate, the Broadmoor Art Academy served as a pillar in the cultural community of the Rocky Mountain West — ultimately evolving into what is known today as the Colorado Springs Fine Arts Center at Colorado College.

Upon its founding, the BAA quickly became a hub for world-class arts education with artists from around the country streaming in to make that happen. Some of the most respected artists in America at the time taught and worked here, such as John Carlson, Robert Reid, Birger Sandzén, Ernest Lawson, Laura Gilpin, Boardman Robinson, and Jean Charlot. Many of the students and instructors, including figures like Paul Burlin, Ludwik Sander, and Robert Motherwell, went on to be some of the most admired artists of the region and the nation.

The growing success and popularity of the BAA eventually led to its transformation into the Fine Arts Center, the multi-disciplinary arts center you’ll find here today. The Fine Arts Center was the first of its kind — a museum, theatre, and art school all under one roof. Three founding women came together to make this community dream a reality. Julie Penrose gifted the magnificent property at 30 W. Dale St.;
Alice Bemis Taylor, an incredible collection of Southwest art that would immediately create a museum program of significance; and Elizabeth Sage Hare, who through extensive connections with East Coast artists and collectors, would successfully recruit world-class teaching artists and exhibitions to Colorado Springs while also serving as the first president of the BAA Board of Trustees.

In 1934, the BAA’s Board of Trustees approved acclaimed architect John Gaw Meem’s design plans for a new, cutting-edge arts center that wove elements of Pueblo structures and Native American iconography with Art Deco styles into a grand building that would later earn a spot on the National Register of Historic Places.

Today, the Fine Arts Center continues to offer rich cultural experiences at the corner of Cascade and Dale. Museum collections and exhibitions feature the art and treasures of the Southwest alongside modern and contemporary art of the Americas by local, regional, national, and international artists. Exceptional arts education and programs build upon the foundation established by the Broadmoor Art Academy in mediums like printmaking, painting, portraiture, and figure drawing with new, innovative classes such as ceramics, mixed media, woodturning, glass blowing, and art therapy programs for the military community as well as a robust school and group touring program. Professionally produced award-winning dramas, comedies, and musicals take the stage in the FAC’s theatres, continuing the performing arts legacy that kicked off 100 years ago. 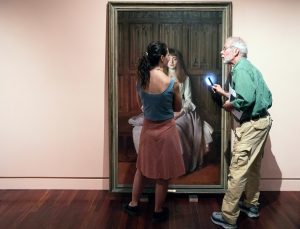 Fine Arts Center Registrar and Director of the Museum Internship Program Michael Howell and museum intern Amber Mustafic â19 evaluate the Elsie Palmer painting by John Singer Sargent after unpacking it upon its return from England where it resided on display for a year.

With a long history of collaboration, including the FAC serving as the de facto art department for Colorado College in the ’30s, ’40s, and early ’50s, the alliance with CC came with a synergy that would make the two much greater than the sum of their parts. Increasingly, institutions of higher education are partnering with arts organizations to bring significant academic value to the missions for their students. With physical proximity, a long history of existing collaboration, a shared sense of place in the Southwest, and related programming with an existing interdisciplinary arts and education program, the alliance between the FAC and CC is proving to be a beautiful marriage of arts and culture and higher education.

Throughout its centennial commemorations, the FAC celebrates a rich history, but also re-examines not only where it has come from, but where it is now, and where it will go in the next 100 years.

From examining shifts that have occurred in the physical and artistic landscapes of the Pikes Peak region in the exhibition, “O Beautiful: Shifting Landscapes of the Pikes Peak Region,” to addressing the commodification of indigenous culture and heightening awareness of sacred space in Nora Naranjo Morse’s exhibition, “Gathering Ground,” the FAC continues to explore, challenge, and provoke dialogue and discovery through a wide range of programs, offerings, and communications.

This centennial anniversary will honor the rich cultural history of the region and celebrate the arts in many forms — visual, performing, and arts education — inspiring people to create, connect with, experience, and protect the arts legacy created over the past century for generations to come. The robust schedule of programming will celebrate and pay tribute to the Broadmoor Art Academy and its visionary founders for the role they played in the ever-expanding cultural landscape of the Pikes Peak region.