Not too many professors can say they have to worry about dogs literally eating a student’s work, but it will be a genuine possibility during Associate Research Professor Steven Taylor’s upcoming State of the Rockies project.

A recipient of a 2019 Rockies Rapid Response Research Grant, Taylor will work with CC interns this summer to investigate ecoacoustics across natural and built soundscapes in Colorado Springs. Taylor is clear that he would not have been able to take on this research without the grant funding, due to the cost of the acoustic recorders he needed to purchase.

“The idea of the project is to sample a bunch of different places to look at patterns across the landscape. Even though the kind that I’m using are quite cheap, I’ve wanted to get about 20 of them so we could disperse them out in a bunch of places at once and that, that adds up to some money.”

State of the Rockies’ impact in allowing this project to happen, will continue to impact student research capabilities in the future.

“Now that we’ll have the recorders, even if some of them get lost or eaten by somebody’s dog or whatever,” says Taylor, “then we’ll still have tools that can be used for student projects in the future.”

When it comes to this first project, though, what exactly is ecoacoustics? Taylor describes it as the ecological investigation and interpretation of environmental sound in natural and built landscapes.

“It’s about looking at soundscapes in relation to ecology, social issues, the environment,” he says. “It’s a young field because it depends on the technology of digital recording and also the availability of analytical tools, both of which have been evolving rapidly in recent years.” 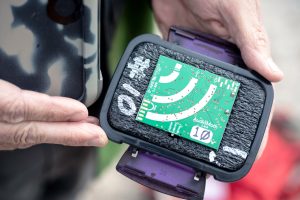 Steve Taylor received a grant from State of the Rockies to fund research in the Colorado Springs area. Taylor will install recording devices around parks, residential and commercial areas to measure sound.

Students will use open source AudioMoth acoustic recorders, “which are like a cheap version of a camera trap, except they’re for sound, in a small Tupperware-type container,” Taylor says. They’ll place these in different types of habitats around Colorado Springs, from residential backyards and high-density commercial areas, to business districts and public open spaces, and record 24/7 for a multi-week period during the 10-week summer session.

Then they’ll use a sound-analyzing module through a free statistical package called “R” to analyze what they capture.

“We’ll get sounds that are animal sounds, which is called biophony — things like bird calls or crickets chirping. And these recorders go from audible sound all the way into ultrasound, so we may pick up bats as well,” he says.

Taylor’s project is exactly the type of thing that Corina McKendry, associate professor of political science and core faculty in the Environmental Studies program, is looking to expand upon through State of the Rockies in her new role as director. (See profile on McKendry.)

The goal of the State of the Rockies Project, she says, is to increase understanding of and examine socio-environmental issues in the Rocky Mountain West through collaborative student-faculty research, education, and community engagement.

The Rockies Rapid Response Research Grants are brand new to the Project. McKendry says she wanted a way to use some of the program budget they have to help faculty have the research resources they need to get out and do research that serves the local community.

“The idea is it’s a really simple application. It’s up to a thousand dollars [per grant] and the idea is that it’s seed money for quick grants. So faculty who say, ‘Oh, there’s this water contamination in Fountain, Colorado, I want to look into it. I need these materials,’ can apply.”

In the case of Taylor’s summer project, students won’t just be tracking what sounds the recordings capture, though, they’ll also be looking at where certain sounds occur, and why.

“There’s big social consideration, social sorts of issues, that we as a society need to face in how people get to live where they do,” Taylor says. “Sound is a way of investigating that.”

For instance, he says, “if you go way up on the side of the mountains where you see the really wealthy people living in these very dispersed residential areas, they get a lot of natural sounds, but if you go into the poorest parts of town, they’re often pushed up next to industrial areas or interstates and they probably have a lot of machine-type noises like cars and industry — called technophony or sometimes anthrophony. We can classify sounds into the source of them.”

CC’s State of the Rockies Project released its ninth annual Conservation in the West Poll in Denver in January. The bipartisan poll surveys the views of voters in eight Mountain West states (Arizona, Colorado, Idaho, Montana, Nevada, New Mexico, Utah, and Wyoming) on policies that affect the use and protection of public lands. The poll continues to command significant media attention, this year netting nearly 100 mentions in two months.

To help users access almost a decade worth of poll data by keywords, years, demographics, and several other search option variables, the Rockies Project developed an interactive website on the State of the Rockies homepage. Using the graphing tools, users are able to visually evaluate their searches and save the output to an Excel sheet for further analyses.