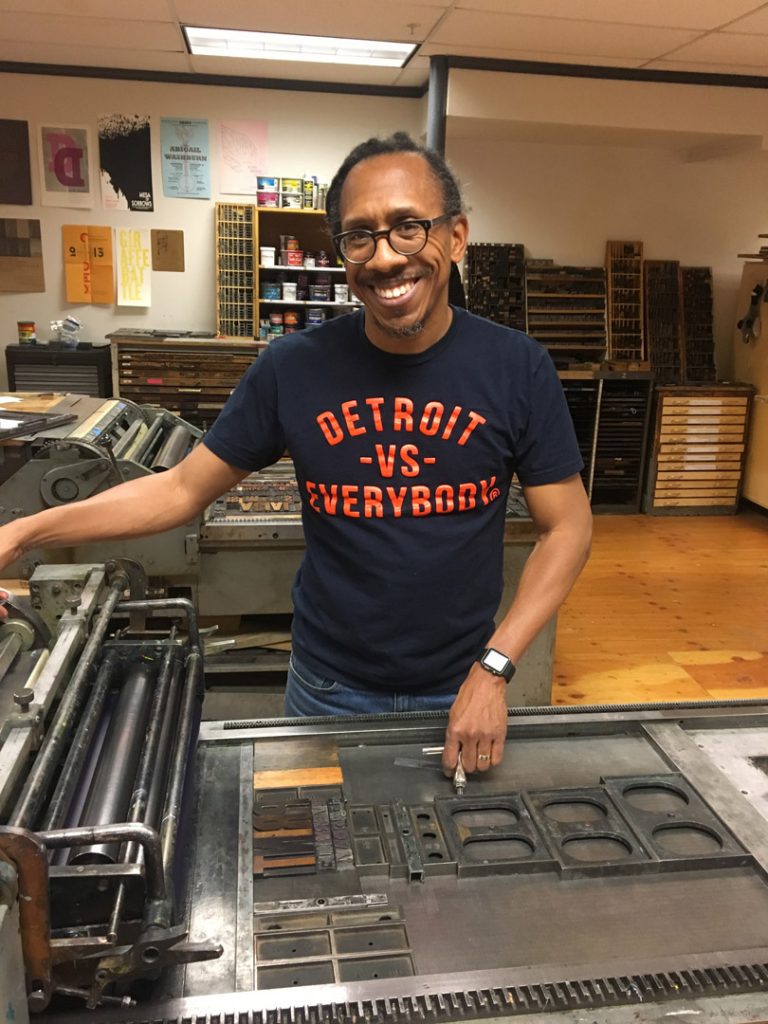 “My work explores questions of race and identity, and the stories we tell ourselves about living in America,” explains Ben Blount, designer, letterpress printer, and visiting professor for his Block 6 class at Colorado College, Book and Book Structure.

Born and raised in Detroit, Blount studied graphic design at Washington University in St. Louis. After college, he worked as a designer for several years before returning to school.

“I’d always had an interest in design, typography, and books as a form, and I took an evening class at Columbia College Chicago to learn how to use a printing press,” says Blount. Columbia College Chicago specializes in arts and media disciplines across all areas of creative expression. When Blount started evening classes, he learned of the full-time graduate program there, and his path in life had to change slightly.

“I’d been on my way to design school, but that evening class made me switch gears. I refocused, worked towards, and received an MFA in book and paper arts,” he says. 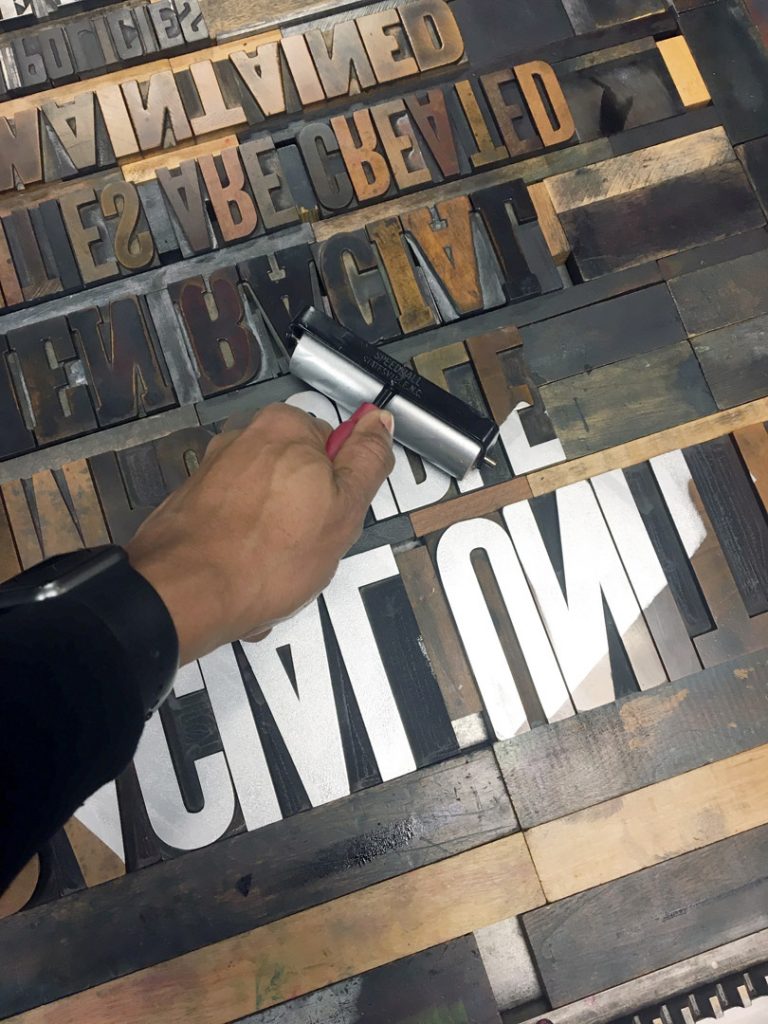 “What really attracted me to it was the tactile nature of the craft, how interactive it could be. I loved manipulating type! It’s also really cool just how much everyday language comes from printing — ‘mind your p’s and q’s, out of sorts, hot off the press, make an impression’ — all these phrases have their origins in print work, so it’s a really impactful medium of work.”

Now based in Chicago, Blount has a “day job” as an art director for an advertising agency in the Windy City, and still finds time to devote to his socially conscious printing and letterpress work.

His design is all client-based, and Blount strives to maintain an emotional, meaningful lens.

“The printing work, and my ad work, it all comes from something emotional. It’s all about finding and expressing something more meaningful, even if it’s someone else’s work that you’re putting your own spin on,
as I do for my day job,” he says. 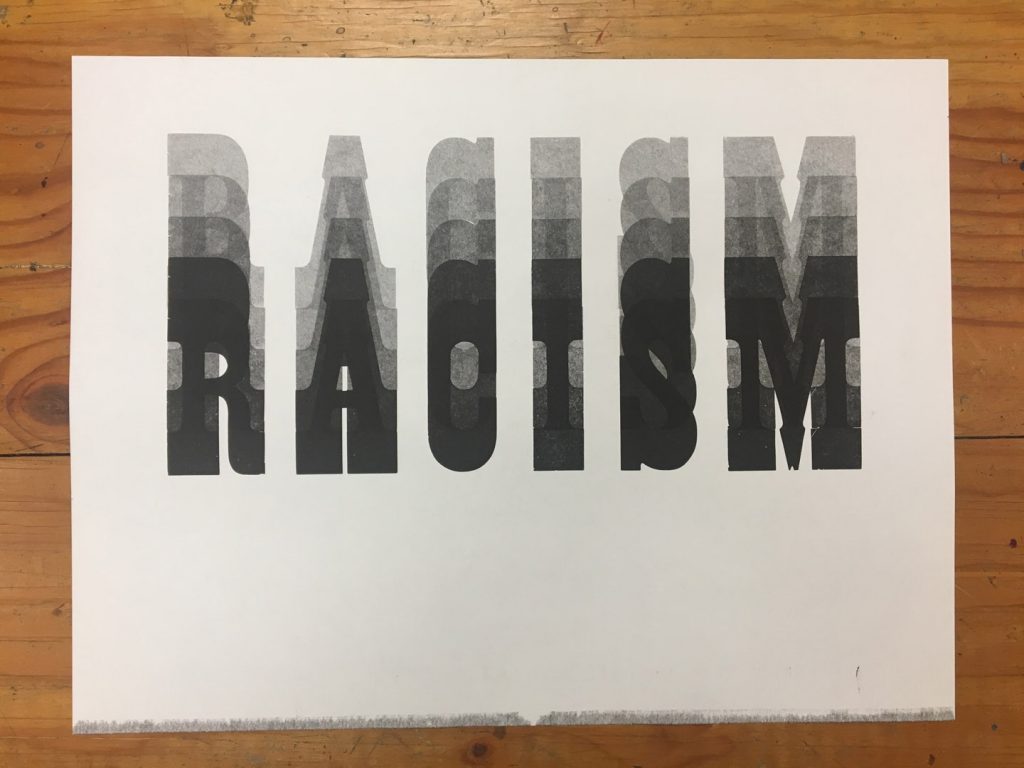 Blount’s own printmaking work deals with identity, race, and culture. “I’m trying to have a conversation with the viewer,” he explains.

“I’m not using print work as a confrontation option, but a conversational one, trying to represent and explore topics visually that may be uncomfortable for some people verbally.”

Of particular interest and focus for Blount at the moment is “exploring and solving problems around white supremacy,” he says. “The issue is, it’s really hard to move forward linguistically because we’re not all coming to this conversation with the same language basis, which is where the visual element
of print can be useful, I hope.”

The focus of Blount’s work coincided with the release of the initial report from the college’s external review on racism and antiracism, conducted by Dr. Roger Worthington from the Center for Diversity and Inclusion in Higher Education at the University of Maryland.

“The Worthington report inspired a lot of the work I did while at CC,” Blount says. “Antiracism seems a step beyond the normal diversity and inclusion initiatives you see at a larger organization, which was encouraging. I tried to figure out what I could pull from the report, from being on campus around the students, and events of the day with speakers like Shaun King and others.”

His Block 6 class was his first time teaching undergraduate students, and Blount arrived at CC not quite knowing what to expect.

“It was a really great experience. I loved it,” he says.“I had a wide variety of students in my class and everyone brought something to the table, and they all came with a level of responsibility and competency that was really encouraging.”

“Taking Ben Blount’s Block 6 bookmaking class was one of the most rewarding experiences I’ve had at CC so far,” says Molly Seaman ’21. “Making the posters, postcards, and books required of us took hours of work. My classmates and I sometimes found ourselves at The Press in the middle of the night … our hands, arms, and faces streaked with different colors of ink.”

The Press at Colorado College, now in its 41st year since being established in 1978, has two full-sized printing presses, a composing and drafting room, and a huge variety of type options, materials, and inspirational pieces for students to draw upon. But students learned it’s not just the materials that are important. 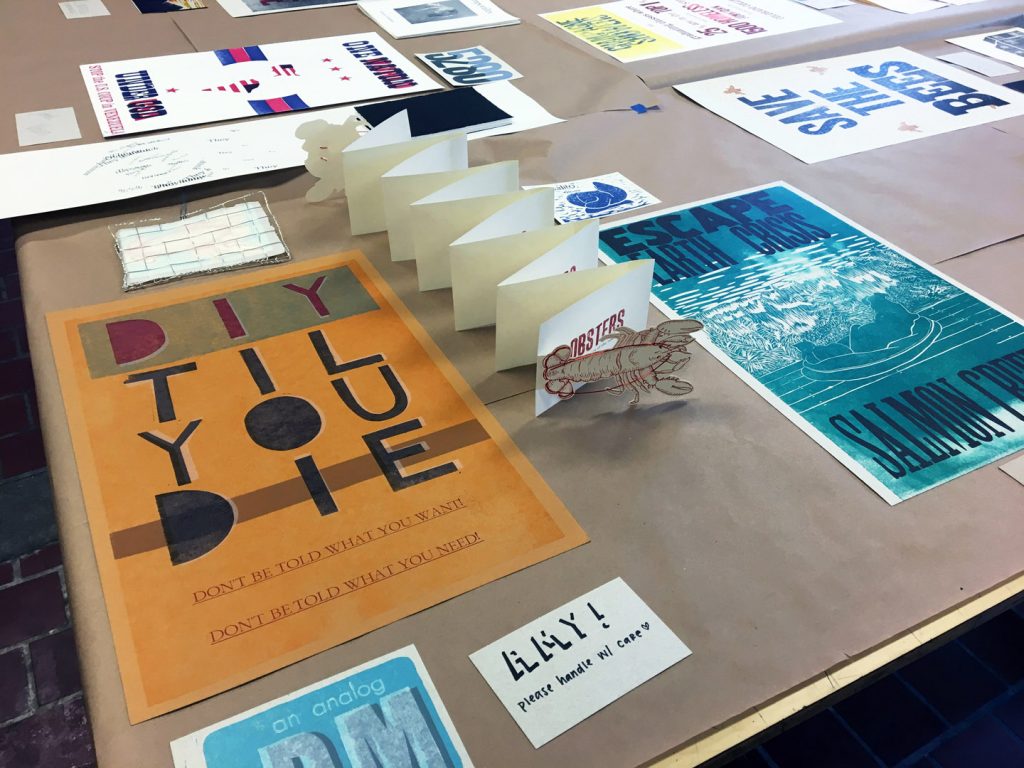 “Press work takes time, patience, and love,” Seaman says. “Ben Blount was right beside us — always smiling, always joking, always laughing, and always enthusiastic and prepared to help us realize our ideas. He is one of the kindest and most talented people I’ve ever met, and I feel beyond lucky to have been one of his students.”

While at CC, Blount immersed himself in the life of the college, including leading a presentation on art, race, and identity called “See Something Say Something” in the Tutt Library Event Space in February.

“CC is an amazing place,” he says. “It was important to me that I got involved as a member of the community.”

“The Press is very cool. It’s really great to see people of all majors from across the community come through The Press, utilizing the space and people like Aaron Cohick as resources, not simply art majors. It’s a real community, and I loved being a part of it.” 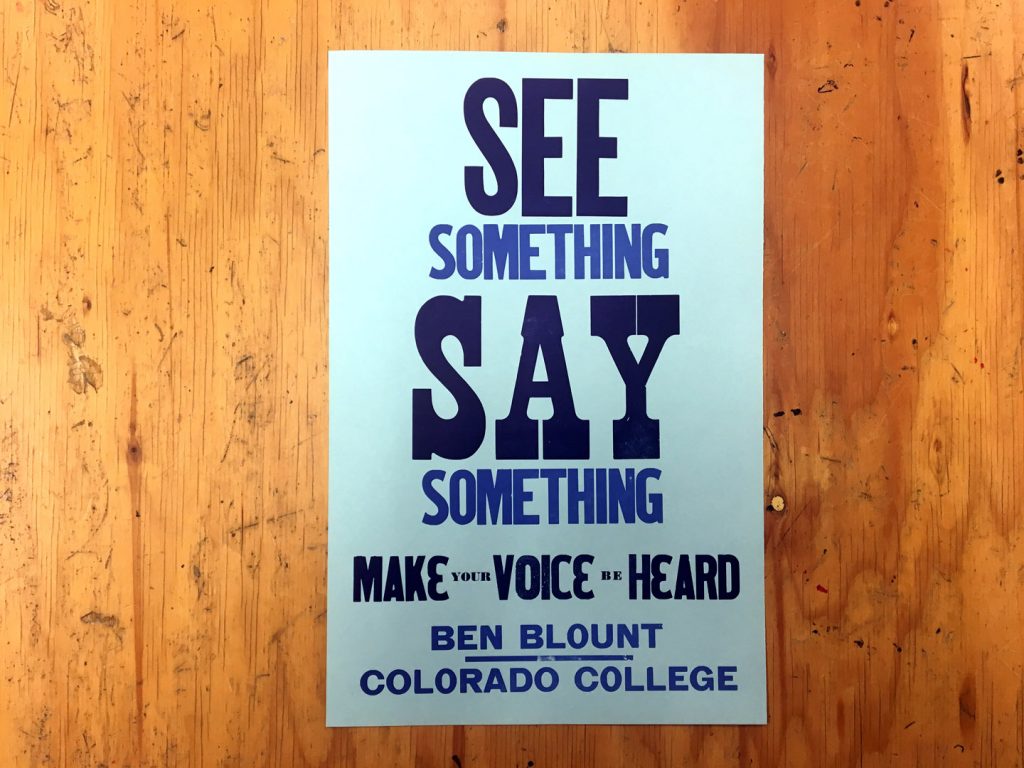