Named in honor of two of the earliest Black students to graduate from Colorado College, siblings Kelly Dolphus Stroud ’31 and Effie Stroud Frazier ’31, the Stroud Scholars Program helps prepare and engage high-promise students from across the Pikes Peak Region in pursuing their ambitions to attend college. These students, who face a range of barriers to college, will earn admission to CC and receive a financial aid package that will enable them to attend once they complete the three-year program. Students are able to kickstart college-level academic work while they’re still in high school, completing annual summer courses and focusing on qualitative and quantitative critical thinking skills.

The program is part of the college’s larger college access initiatives, which include CC’s Colorado Pledge, a pilot program aimed at supporting Colorado families with adjusted gross incomes below $200,000, and CC’s test-optional policy, in which applicants can choose whether to submit standardized test scores as part of their admission application.

Of particular focus for the Stroud program is the vital importance of bringing local students to campus both in the short and long terms.

“It’s really meaningful and important for us to find and recruit high-promise students from local schools who may not have considered CC a place they could look at, so that they can see themselves here,” says Jim Burke, the director of Summer Session, whose office was one of the key stakeholders in facilitating the Stroud program this summer.

“The way we structured the student selection, did interviews, and conducted outreach, it was all to make CC viable to those who may not see it as so, to broaden the scope of what a CC student can and should be.”

Approximately 120 students applied to be a part of the Stroud program; 25 were selected in a rigorous and holistic review and interview process.

“There’s such a broad base of support across CC’s campus and among our community partners at local schools for something like Stroud, that it was incredibly rewarding to be able to deliver a program that I believe makes all of these groups really proud of being involved,” adds Burke.

Jada Miller, also from Fountain-Fort Carson High School, “loves history and math” and was selected by her school as a possible candidate for the Stroud program. Though she was excited by the selection, she didn’t know quite what to expect until the program representative came to her school to explain more.

“When the rep spoke about diversity, wanting students from multicultural backgrounds like myself, it really surprised and encouraged me. Talking about campus events, the profile of speakers, the program that CC offers, it was super exciting,” she says.

The key component to Stroud, beyond the academic programming involved, is the people. Students are taught by a combination of CC and high school faculty, and mentored in groups and individually by CC students from similar backgrounds to their own. For this first iteration of the Stroud program, which ran Aug. 3-7, two of the numerous involved faculty were CC Psychology Professor Lori Driscoll ’94 and K8- Math and Science Specialist Phillip Hutcherson of School District 11 in Colorado Springs.

“I’ve worked for many years with CC as a volunteer for their community engagement programs, and the moment I heard about Stroud I applied to be a part of it,” says Hutcherson.

Driscoll and Hutcherson co-taught the quantitative class portion of Stroud, designed to help students engage with data in a critical and curious way. “We wanted to teach these students how to analyze data properly, to question its validity and source certainty. Especially in today’s world of fake news, the skills of knowing a good source and how to examine databases are absolutely vital,” Driscoll says.

For both Driscoll and Hutcherson, their involvement in Stroud wasn’t simply a teaching assignment or opportunity, but a personal call to action to actively engage with these students in this program. “I only came to CC because I got a Boettcher Scholarship. I hadn’t even heard of CC until an older friend of mine went there and wrote me a letter telling me that I had to come and see this place for myself,” says Driscoll. “As the first person in my family to go to college, CC transformed my life. For me to be able to give back to CC in this way, along with my regular teaching at the college, is a real act of love — creating an environment where people cherish knowledge. When the Stroud program was announced, something spoke to me at my core, and I had to be involved.”

Hutcherson’s sentiments mirror Driscoll’s. Both are from Colorado and are able to speak to and relate to what the Stroud students are experiencing.

“I was one of these students,” says Hutcherson. “I’m also a first-generation college graduate, my mother was the first high school graduate in my family. Being able to recognize the value of an educational opportunity and to pass it on, that’s something really special. For me, Stroud was a full circle of ‘aha!’ moments, reminders of why I’m doing this.”

The Stroud mentors, who met with students individually and in small groups via Zoom, echoed the sentiments of the faculty. 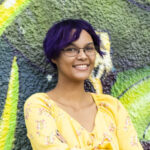 “Before CC, I had a really different view of college — in high school I was told that it’d be a hard fit for me because of the money involved,” says Chloe Brooks-Kistler ’23, a rising sophomore and Bonner Fellow who has worked with local schools and the Inside/Out Youth Services program, as well as volunteering at KRCC, Colorado College’s NPR-member public radio station. “When I heard about Stroud toward the end of my first year, and knew it was for local kids like me, I thought that if I’d had this program when I was in high school, I’d have loved it! What it does, in making CC a viable and attainable option for kids like me, local kids who may not have the means to initially think about CC, it’s awesome, and so I really wanted to help.”

With the ongoing COVID-19 pandemic, the structure and timeline of this first iteration of the Stroud program were always going to change and change drastically.

“We knew that we had to make this happen, in spite of the pandemic,” explains Burke. “The shift we made was simple; instead of the weeks on campus, we reconfigured it to a five-day online-only program, making it far more concentrated but no less impactful. Everyone involved in Stroud behind the scenes made a tremendous effort to deliver, despite the one-week time limitation, a program that illustrated the core values of the college. I’m really proud that we were able to do that.”

The experience, while not what was initially planned, still carried great resonance for everyone involved. Students spoke of shedding tears on their last day and continue to stay in touch with classmates and new friends, friends that they may never have made were it not for this five-day experience.

“Mentoring via Zoom was kind of weird, especially as some of the students wouldn’t have their cameras on so it became more of a phone call than a face-to-face conversation,” says Brooks-Kistler. “That said, we made it work — despite it being very strange for it to be online. Mentors had community lunches every single day, including sessions with the Stroud family themselves, a movie night, collaborative art projects, and loads of random discussions.”

“Initially, I was scared and nervous, but we became super close,” says Miller. “I’ve definitely made a few very real friends from this program, and I’d never known that there were this many kids like me spread out around the city.”