When It Comes to COVID-19, CC’s Students Write It Best

On Oct. 22, the New York Times ran a story titled, “To Cover College Quarantines, We Turned to the Best: Student Journalists.” In a follow-up story two weeks later one of the journalists they interviewed was Arielle Gordon ’21.

Gordon and Miriam Brown ’21 founded The CC COVID-19 Reporting Project this summer, with the help of three faculty advisers and funding from a CC summer research grant. For those 10 weeks, the team published stories daily. Brown says it is now solely student-run, through The Catalyst student newspaper, and the two, with Isabel Hicks ’22 and Esteban Candelaria ’21, have been providing original reporting, interviews, and infographics twice a week since the semester began through an email newsletter and website.

When it came time for a Bulletin story addressing COVID-19 and its impact on campus, we turned to them for the most authentic CC coverage.

Read on for a handful of these student-written stories (edited for style, but otherwise in their original form). And for more like them, subscribe to their newsletter at cccovidreportingproject.substack.com.

Tent teaching has come to Colorado College. Is it here to stay?

For some, classes this semester have been more “in-tents” than they may have initially expected. (Spare us your groans. We couldn’t help ourselves.)

If you’ve been on campus recently, you’ll notice some new decor: large white tents set up across campus as outdoor classrooms. After scientists raised concerns about how poor ventilation could impact Coronavirus transmission, Colorado College joined other higher-ed institutions embracing the outdoors in efforts to hold in-person classes. Amherst College in Massachusetts has tents on campus, and Rice University in Texas purchased five open-sided circus tents in addition to four other tent-like structures.

“It wasn’t like there was some kind of proclamation that came down: ‘we shall have tents.’ It was just this kind of thing like, ‘what about tents?’” English Department Chair Steve Hayward, who also directs CC’s Journalism Institute, told The CC COVID- 19 Reporting Project. “I think that there’s a way in which that really appealed to a lot of people’s safety concerns, but also to one’s imagination.”

In the spring, Hayward saw an article in The Chronicle of Higher Education about how other institutions were embracing tent-ative classrooms. Then in July, when he was a correspondent for this newsletter, he helped us write a brief about more tent use. Though he didn’t use a tent himself, Hayward helped solidify teaching in tents as an option for other professors. As chair of the English Department, he said he felt a responsibility to make sure that professors were able to teach the way they wanted to as safely as possible.

“You know, some of the windows in Armstrong don’t open. … They don’t ever open,” Hayward said. “And I was thinking that if I had to teach in there, I’d rather do it outside. It was part of what motivated my tent advocacy.” Hayward added that Registrar Phil Apodaca ’87 and CC Facilities Services were the true players who made tent teaching happen. 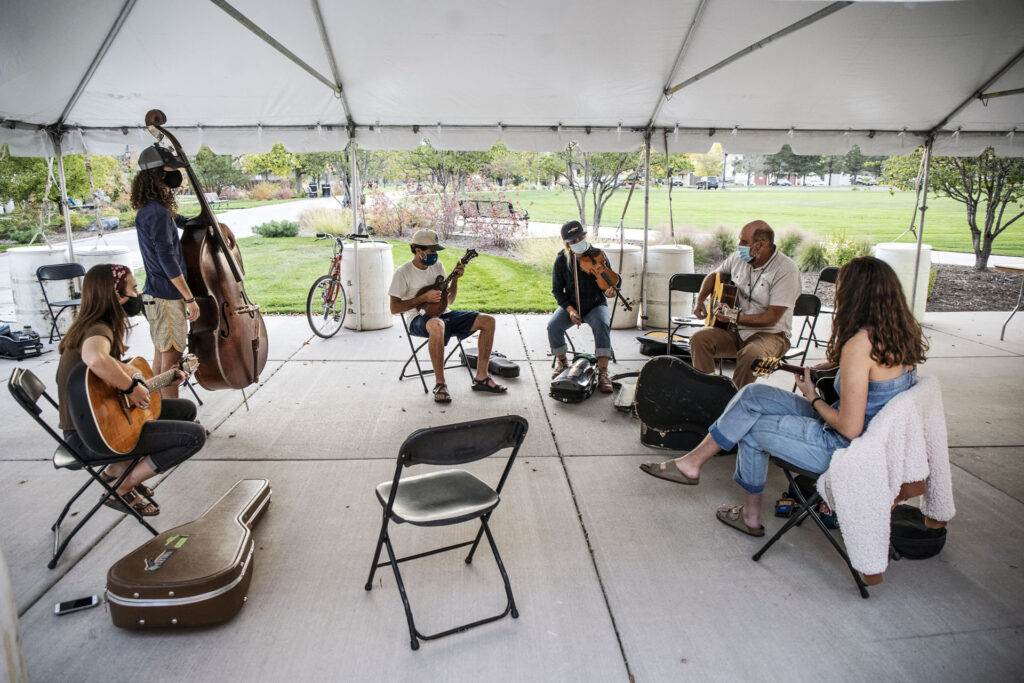 Rain or shine: The block must go on

During a stroll around campus, you might wander past a couple different classes taking advantage of the outdoor learning. In a tent on the west side of Tutt Science Center, Director of Bluegrass Keith Reed has been giving individual music lessons and meeting with small student groups, including the CC Bluegrass Ensemble. At tables set up underneath the Fishbowl, chemistry students practice problems on whiteboards with Professor of Chemistry Sally Meyer.

According to Reed and Meyer, teaching outside certainly has its perks. Though Colorado weather can be notoriously temperamental, professors teaching outside Block 1 say the weather has been mostly cooperative. Plus, the  extra air circulation provides a way for students to meet face-to-face outside of stuffy classrooms.

“It’s actually been nicer than inside because Facilities puts these whiteboards up every day for me,” Meyer told The CC COVID-19 Reporting Project. “When you’re inside, [students] don’t necessarily have a whiteboard next to their table.”

For Reed, the transition to teaching outdoors was relatively easy. Their instruments, including fiddles and banjos, are portable, and if students need to reference past work, they’re able to play recordings from their phones. A bonus of practicing outdoors is that students seem to sing louder, Reed said.

“When students perform outdoors, they for whatever reason … sing louder, and they’re not as timid,” Reed told The CC COVID-19 Reporting Project.

While the outdoor environment provided benefits for some musicians, some chemists faced a bit more difficulty. The day Meyer decided to try to do an experiment with her class, Mother Nature interfered.

“I looked at the weather and it was supposed to be beautiful, sunny,” Meyer said. “But then there was so much smoke [from wildfires] that day.”

Then wind caused its own problems, knocking over whiteboards so much that Lisa Hughes, who teaches in the English and Comparative Literature departments, said it almost became a game for students. In addition to wreaking havoc on whiteboards, loud wind also made hearing more difficult. Hughes worked with Accessibility Resources to get masks with a clear plastic piece over the mouth for her class to make it easier to read lips. The Audiovisual Department also gave her a headset and microphone to amplify her voice.

“I felt like I worked at Old Navy or something,” Hughes told The CC COVID-19 Reporting Project. “I kept saying into the microphone, ‘We need more shirts in aisle seven.’”

Creating an equitable learning environment in a new space

The timing of the Block 1 quarantines also presented a challenge for tent classes. Hughes’ CC100 literature class only spent one week together in the tent, minus the two Loomis Hall residents who got quarantined within the first few days.

“We had what I thought was really one wonderful week in the tent,” Hughes said. “Then everybody else got quarantined anyhow, so we ended up going remote.”

The two students in locked-down Loomis struggled with not being able to physically be in the class as everyone else bonded in person. Hughes said one of the students told her that she felt like she was behind and couldn’t ever catch up.

The possibility of leaving some students behind has led a few professors to question the fairness of having in-person classes for some students while others have no choice but to take them online.

Environmental Studies Associate Director Eric Perramond, who also teaches in the Southwest Studies Department, was originally set to teach in a tent for his Block 2 class, a first-year writing seminar about the Southwest. Concerns about equity ultimately changed his mind.

“It did not seem fair to me since half of my class was on campus, and the other half of the first-years were sent home,” Perramond wrote in an email. “As a firm believer in inclusive and equal education and pedagogy … I simply thought it important (and right, inclusive) to not create two separate learning experiences, for first-years remaining on campus versus those who were asked to go home because of COVID-19.”

To compromise, Perramond switched his class to flex delivery and offered in-person office hours with masks and social distancing once a week for his students still on campus.

Hayward also noted that there are plenty of students who don’t want to attend in-person classes right now, regardless of if they were in a tent. The college has to extend equity to students with anxieties about the pandemic too, he said.

“You have to put them first. … I want everyone to feel that they’re in a safe, nurturing classroom space,” Hayward said. “And where we are right now, I don’t think that the in-person instruction, from my perspective, is something that we can do.”