Decolonizing During a Pandemic

During her residency as the Andrew W. Mellon Artist-in-Residence at Colorado College for the 2019-20 academic year, Anna Tsouhlarakis erected two eye-catching billboards near downtown Colorado Springs.

These billboards read: “I really like the way you respect Native American rights” and “It’s great how you acknowledge that Native Americans are here.” Their design — in capitalized black sans-serif letters on white backgrounds — demonstrates a Minimalist approach that remains consistent throughout the videos, sculptures, installations, and other media now included in “To Bind or to Burn,” Tsouhlarakis’ new exhibit at the Colorado Springs Fine Arts Center at Colorado College.

When asked how she employs Minimalism to Indigenize contemporary art, Tsouhlarakis says, “Minimalism has always been connected with white men. This is a fiction that Western art historians and critics have led the world to believe. But so much of Indigenous art utilizes the framework of what we know as Minimalism and I believe this is why I have always been drawn to it. To see Native face-painting, beadwork, weavings, and rock drawings as forms of Minimalist art would rightly open the definition and help it be more accurate. I think I’m merely pointing to connections that are apparent to me.” 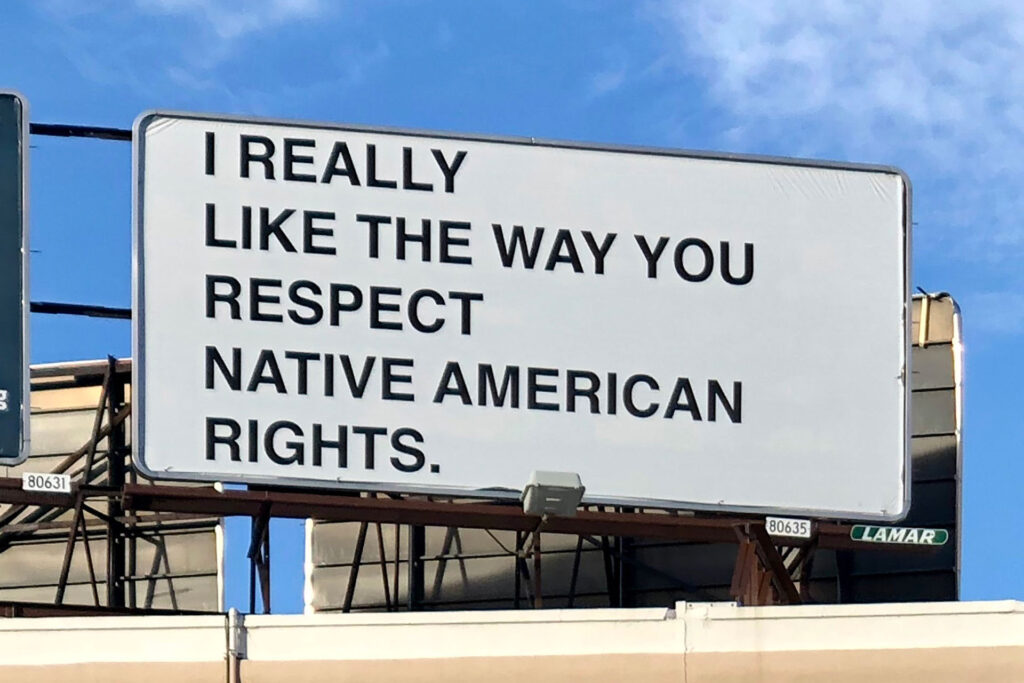 After walking past the billboards, which are now displayed at the exhibit’s entrance, and a nearby projection of the billboards on the gallery wall, visitors are greeted by a large multimedia space that Tsouhlarakis decolonizes through a diverse selection of art forms that work in tandem to translate the Navajo tradition of binding. Binding can be described as an action used to teach self-control, respect, and balance within the worlds of human and nature. Examples of binding within the Navajo tradition include wrapping infants in cradleboards to ease their lack of bodily control and keeping hair clean and tied back so as to provide clarity of mind and positive intentions.

Tsouhlarakis explains that her translation of binding is just one way to decolonize contemporary Western art. She explains, “I’m sure there are so many ways to get there but, for me, this made the most sense and was the most relevant.”

“The idea of having your child in a cradleboard is such a departure from Western mentality that non-Natives didn’t know what to think. The Western, or should I say American, mentality of being child-centric, rather than family-centric, does not grow a family or create people who are community-based,” she says. “I am more interested in helping create a population that is aware of our pitfalls and also interested in sustaining and building communities.”

Experiencing the translation of binding happening throughout “To Bind or to Burn” can only be possible in person, for the efficacy of Tsouhlarakis’ messaging lies in the visitor’s ability to literally walk through installations like “Edges of the Ephemeral” — a site-specific installation made of found wood, found metal, crushed granite, other found objects, and manufactured signs — to watch massive projections of videoed performances, and to observe the series of sculptures and framed works of fire and ash on paper from every possible angle. Fortunately, visitors are now welcome at the FAC as long as enhanced COVID-19 safety protocols are followed. 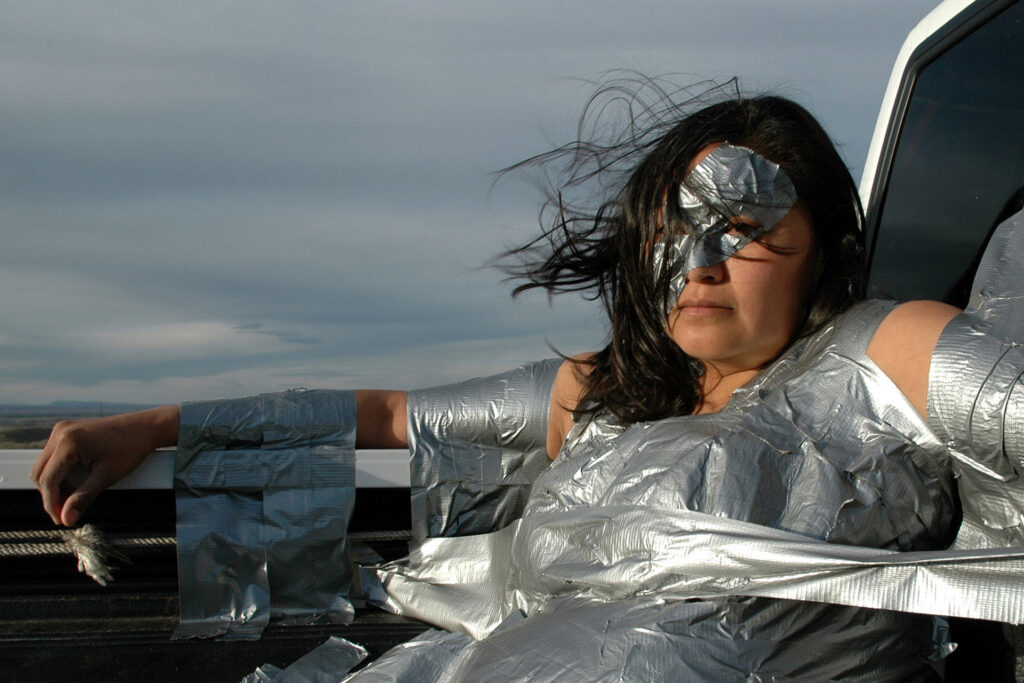 The new difficulties associated with creating during a pandemic haven’t slowed Tsouhlarakis down. In fact, the COVID-19 conditions may have rendered “To Bind or to Burn” even more impactful to a wider audience.

“It seems so many people sought new methods to deal with stress, anxiety, and isolation during the pandemic in various ways, so maybe it is more relevant in this time,” Tsouhlarakis says. “I think the relevancy may come from the fact that people are open to new ideas of dealing with new feelings and situations that we haven’t experienced.”

Anna Tsouhlarakis works in sculpture, installation, video, and performance. She received her Bachelor of Arts from Dartmouth College with degrees in Native American studies and studio art. She went on to receive her Master of Fine Arts from Yale University in sculpture.

Her work has been part of national and international exhibitions at venues such as Rush Arts in New York, the Art Gallery of Ontario in Toronto, the Nasher Museum of Art at Duke University, Crystal Bridges Museum, the Museum of Contemporary Native Arts, the Heard Museum, and the Smithsonian’s National Museum of the American Indian. In addition to her residency at CC, Tsouhlarakis has participated in various art residencies including Skowhegan School of Painting and Sculpture, and Yaddo.