These are just a few of the objects that comprise the Colorado College IDEA/Campus Collection. The artwork, separate from that held by the Colorado Springs Fine Arts Center at Colorado College, has evolved over the years. In the 1970s, it included thousands of specimens when the college had a natural history museum.

Since then, CC has dispersed the specimens, appraised the collection twice, and several people have handled its management. In recent years, it fell under the purview of Jessica Hunter Larsen ’90 when she was curator of the IDEA Space — an interdisciplinary experimental arts program. After CC announced its historic alliance with the FAC in 2016, management of the campus collection was placed in the hands of Professor of Art Rebecca Tucker.

Part of what makes the collection unique is that it is almost entirely donated. It contains 600 objects, primarily paintings and works on paper, 100 of which are on display across campus. The rest are stored in Palmer Hall. 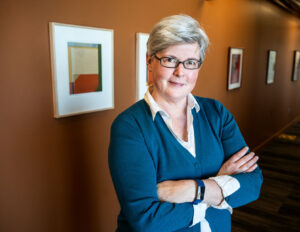 “Officially, the collection is the umbrella for any piece of art owned by the college that is not in the FAC. So, outdoor sculptures, office decoration, all sorts of things, fall into the campus collection. And the job of the manager is to keep it updated, make sure everything is in good condition, and handle loans to faculty and staff,” Tucker says.

A Collection by Way of Community

The collection is a little-known resource that represents many decades of college history. Future plans include creating and implementing a campus-wide loan program that would allow the collection to be more accessible and available to staff and students.

Last year, Tucker facilitated the donation of 59 works from Conrad Nelson, an artist whose work has been exhibited at the Fine Arts Center. Nelson pursued a degree in fine arts after her career in corporate banking. Upon moving from Philadelphia, Pennsylvania, to Buena Vista, Colorado, she made connections in the Colorado Springs arts community.

“Her collection is important to the campus loan idea because she collected local and regional artists. The vision for the loan part of the campus collection is that it will be a collection that highlights our sense of place,” says Tucker.

Nelson’s collection goes back decades. Her husband, Grant Heilman, was a photographer who had collected art since the 1940s. When he died in 2014, Nelson had to decide what to do with the collection, and it just happened that Nelson’s longtime friend, Jean Gumpper, is a lecturer and artist in residence in the Art Department at Colorado College. 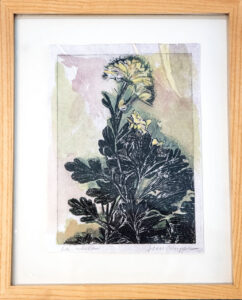 An art piece by longtime CC faculty member Jeanne Gumpper is on display at Tutt Library.

“I happen to be lucky. I’m in a position to be able to donate. Jean Gumpper introduced me to Rebecca, and then all the pieces fell into place,” says Nelson.

Nelson’s philanthropy comes naturally. Her parents were generous, and she too has always volunteered her time and resources.

“I feel I have responsibility for doing something good. My theory is that art is like getting to learn to like certain foods. You have to be exposed to it to learn about it and appreciate it,” Nelson says.

Blair Huff ’14 has been one of the first to work with Nelson’s collection. After earning a degree in art history at CC, she realized her dream of working at a museum when she was hired on as a curatorial assistant at the FAC in 2017. Her timing was fortuitous.

“I was especially excited by the future of the Fine Arts Center and its alliance with Colorado College. It seemed like the perfect opportunity to come in when a lot of new, exciting things were happening, and everyone had so much enthusiasm for the future of the museum,” Huff says.

She selected pieces from Nelson’s collection for an installation in Tutt Library. The pieces were hung in August 2020 when the library was closed due to COVID-19. Huff says that they include a wide range of subject matter and media, including abstract, figurative, and nature-inspired pieces.

“I was looking for aesthetic similarities to group the objects and create moments where you could interact with them and see which pieces talk to each other in interesting ways,” she says. “I hope they give a sense of that feeling of stumbling upon something surprising, beautiful, or compelling.”

Each library floor contains some pieces of the installation, and Huff made certain to include artwork in the areas of study and work. Also facilitating the installation were Steve Lawson, interim library director; Jenn Sides, library operations manager; and Dan Crossey ’74, carpenter and cabinetmaker.

On Campus, Online, and On Loan

In addition to exhibitions like the one in Tutt Library, Tucker wants to make the collection more accessible by putting it online where students, faculty, and staff could view works and choose what they’d like to borrow.

“It would allow people to select art that they like and capture some of the excitement and dynamism of living with original art,” Tucker says.

Students would run the loan program and not only get experience managing a collection, but they’d also have a voice in selecting which gifts are accepted.

“A lot of the antiracist values that we’re all working on can be encapsulated in this new program. We can make sure that the objects that we lend are diverse and reflect our region. There are ways to be thoughtful and mission-driven in how we capture our history and how we share that history in representative ways,” she says.

Amber Mustafic ’19 and Lucas Cowen ’22 have been instrumental in developing the nascent loan program. Mustafic stayed on after graduation as a ninth-semester fellow in the art department, during which she designed the loan program. (See Alumni in the Arts for more on Mustafic today.)

Cowen, a museum studies major, has taken a hands-on approach. He has moved artwork in the storage space, grouped them according to size, met with Nelson about her collection, and helped in other ways to get the loan program ready for launch. One of his tasks involved sorting.

“There are a lot of works in the collection. So, we go through them to identify where things are assigned, who made them, when they made them, and when the school acquired them. We catalog them according to that data. And we decide whether or not some works are problematic and if we should omit them from the collection,” Cowen says.

Since the collection contains not only paintings and the like, but also a six-foot-tall portrait of former CC President William F. Slocum, whose legacy includes overwhelming evidence of sexual misconduct and assault, those decisions require sensitivity.

Cowen says the collection democratizes access to art, which sometimes can be a daunting space, especially in commercial markets.

“A campus collection like this is really important, especially at a liberal arts institution, which is trying to foster a sense of values and morals. It can bring someone into understanding that they can have thoughtful opinions about art. Art can make a big difference in their lives. It can set them up for the rest of their lives to be not only casual observers but someone who can find art fascinating and compelling,” he says.

He believes that having young people decide what goes into the collection and what work is worth showing will result in them finding art and artists whose value may not be recognized in commercial settings like conventional galleries.

Tucker hopes to launch the new loan program in Fall 2021.