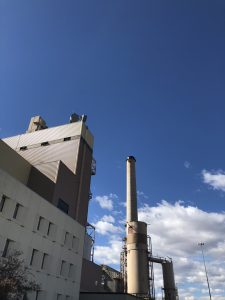 COLORADO SPRINGS — Colorado Springs Utilities officials are embarking on major shifts in the way they are producing electricity for a growing city.

With the planned closing of the coal-fired Martin Drake Power Station by 2035, and a wide public backlash to coal, utility officials say they are looking towards renewables.

“But we will never get to 100 percent renewable,” CSU environmental services manager Dave Padgett said. “The sun doesn’t always shine and the wind doesn’t always blow.”

As of October, a CSU solar panel array located on semi-arid high prairie southeast of the city produced up to 10 megawatts of electricity for a municipal system that produces up to 908 megawatts overall, officials said.

This is far less than what they say they hope to produce in the future.

But solar systems face challenges, according to plant managers. It is more expensive for both producers and consumers — about $31 per megawatt compared with $21 for natural gas and $16 for coal.

And a shift to relying on the sun could mean less municipal jobs. The Nixon coal-powered plant employs 78 technicians, mechanics, overseers and managers, as well as independent contractors. A solar array can be managed by just one person with only intermittent maintenance work required.

CSU officials said during a recent visit that they also are emphasizing natural gas as a more significant source of power for the future as coal-fired operations at the Drake plant decrease.

Natural gas produces only half the carbon dioxide that coal emits when burned. However, the process of extracting natural gas through hydraulic fracturing, or fracking, presents significant environmental, social, and political problems.

Colorado Springs officials have set a goal of using 10 percent renewable power by 2024. They would have to shift faster than that to meet the timetable that the United Nations-backed Intergovernmental Panel on Climate Change recommends.

CSU officials say even the 10 percent target represents a challenge, requiring uprooting of infrastructure, jobs, and bigger utility bills for residents of the city.

“The question is just how much are we willing to pay for renewables,” says Padgett, “because it’ll cost.”