GREAT SAND DUNES NATIONAL PARK – At Great Sand Dunes National Park, sand steadily rises to tower over visitors as they stare up at hikers who choose to trek to the dunes’ peaks, way above their heads. Walking among the dunes, one realizes their insignificance relative to the grandeur of nature. 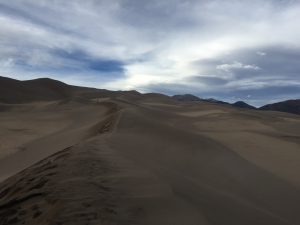 Visitors are attracted to the park’s unique landscape for its visual stuns and its interactive activities like hiking and sandboarding. The park is becoming more popular each year. In fact, there was a 100 percent increase in the number of annual visitors from 2013- 2017, according to the park’s chief resource manager Fred Bunch.

“My main concern for the park’s future is congestion,” said Bunch. He said that even though National Parks are lucky to have so much support from American people, it’s becoming harder to keep providing them with a positive experience when the infrastructure can’t handle the parks demand.

“Congestion often has impacts to safety, visitor experience, emergency response times, and park operations,” according to the National Park Service website. Bunch said he worries about the parking lot, since there is only one by the entrance to the dunes and it has limited spaces.

Even though Bunch is trying to reduce congestion in order to provide a more positive experience for his visitors, he also acknowledged the value of the economic benefits that visitors bring not only to the park, but also its neighboring towns.

Park Service Data revealed that visitors to this park brought in $29 million in revenue last year for the park and helped put $34 million back into the local economy by buying gas, eating at restaurants and using local services. Additionally, the tourists helped sustain 408 jobs in the area by staying at hotels, eating meals, and shopping.

Even though these visitors are deterring from the feeling of solitude the dunes inspire, Bunch said the community would be in much worse shape if these people didn’t come.

Bunch wants to embrace the economic opportunity this park has created for the community, notably by expanding the park in terms of land acreage and infrastructure in order to make the park even “more of a destination.” By establishing the park as a certified Dark Sky Reserve and expanding the park to include more of the nearby mountains and streams, he hopes people will stay longer and buy another tank of gas or another meal, thus putting more money into the local economy.

“I understand the value of money” Bunch said. Having lived in the San Luis Valley since 1968, which is the poorest region in Colorado, Bunch has seen the park’s popularity transform his local economy for the better. He is devoted to increasing the park’s appeal and sharing his love of the park to a wider audience: “When you look across that landscape and can’t tell what year it is… that’s my goal, that it’s timeless.”