COLORADO SPRINGS – As the implications of climate change grow more dire, scientific reports are encouraging a faster shift from fossil fuels to renewable energy in order to reduce emissions of heat-trapping greenhouse gases.

Some municipal utility officials are beginning to address harm their power plants may be causing to the environment. 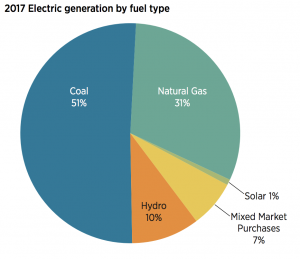 But city council members have ordered change. CSU is now aiming to operate on 14 percent coal by 2035. 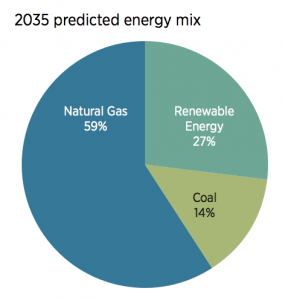 To move towards this goal, CSU officials say they’ll close the coal-fired Drake plant in the middle of the city no later than 2035. However, Rawson said the Nixon plant may operate “as long as coal remains competitive.”

Since Colorado Springs receives over 300 days of sun per year, CSU officials say they will pursue solar power as an environmentally friendly alternative.

They run four community solar gardens, one solar array at the Air Force Academy, and another at their Clear Spring Ranch property southwest of Colorado Springs. With 42,000 panels, the Clear Spring array is their largest and produces 10 megawatts of electricity, enough to power 3,000 homes.

CSU crews will install another solar array to produce 35 megawatts next year, and before 2020 will add at least another 60 megawatts from solar panels, said Warren Seese, CSU’s senior project manager.

With these projects, CSU will take their renwable energy mix from 11 percent to more than 20 percent using renewables by 2024, which will power more than 75,000 homes, according to data from CSU’s website.

Solar is an expensive investment, as the Clear Spring Ranch array costed roughly $50 million to purchase and install, Seese said.

Because of the shift towards solar, Colorado Springs residents will likely see an increase of 1% on their electric bill by 2020, according to CSU’s website.

Even though CSU is committed to pursuing more renewable energy, “we don’t yet have the transmission capacity to bring in renewable energy from other sources,” which would be necessary if Colorado Springs experiences too much cloudy weather blocking sunlight, Padgett said.

Colorado Springs’ energy future depends, Padgett said, “on what everyone is willing to pay.”