ALAMOSA – Agriculture has been the base of the San Luis Valley’s economy since before farmer Cleave Simpson can remember. 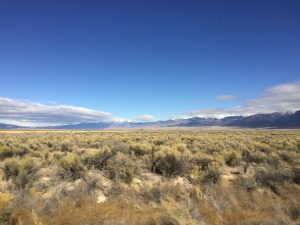 “I’m the fourth generation in my family trying to eek out a living here,” Simpson said during a recent meeting with Colorado College students at his Rio Grande Water Conservation District office.

Like most farmers here, he depends on irrigation for his crops.

But water is tight. This year marked the fourth lowest flow the Rio Grande River has had in the past 120 years, Simpson said.

The San Luis Valley “is based 100 percent on irrigated agriculture from a water supply that doesn’t exist anymore,” he said.

Since the return on investment in agriculture is relatively small and uncertain, Simpson worries about sustaining his farming career in the valley.

“I’m confident my farm wouldn’t be profitable if I had to pay for my own water,” Simpson said.

A new conservation-oriented sub-district hasn’t started fining its members for the water they extract, but farmers may have to start paying fees since water is becoming scarce.

The aquifer could recharge if residents temporarily stopped withdrawing from it and the area received enough rainwater and snowmelt, Simpson said. However, this recent year of drought took a toll, according to data from the Rio Grande Water Conservation District.

“I want my son to be the fifth generation. But there are days when I go: ‘I don’t know if there’s a future here’,” he said.

Alamosa receives over three hundred days of sunlight each year. Solar companies have expressed interest in the region. But Simpson doesn’t want to sell his farm to solar. He wants to keep his land, he said. Since alfalfa is relatively water-intensive, Simpson has been exploring other options of crops he can grow.

He and his father recently started growing industrial hemp, which is valuable for its Canabidiol (CBD oil). Simpson was initially interested in growing hemp because it uses significantly less water than alfalfa. He’s been happy with its economic potential. In the San Luis Valley, there are a couple thousand acres devoted to growing hemp. “[Hemp] has some promise. I think it’ll turn out okay,” said Simpson.

Complications arise with the hauling and marketing of the product. The Colorado Department of Agriculture only oversees the cultivation of industrial hemp. Farmers are left on their own when it comes to finding a market for their product. This is especially difficult in such a remote region. “Because of our isolation, shipping costs eat us up,” Simpson said.

Hemp and other crops that require less water could help farmers survive. A climatic shift toward hotter temperatures may add to the pressure.