ALAMOSA – Nestled beneath snow covered mountains, this high desert basin is so dry that one resource matters above all else – water. In the San Luis Valley of south-central Colorado, life revolves around water. 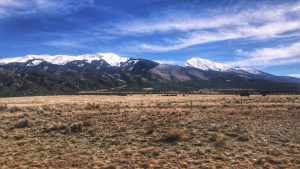 Agriculture is the main industry. For locals, agriculture means more than income. It is an engrained culture. They depend on the Rio Grande River to irrigate crops and, during dry years, use underground aquifers was water savings accounts.

“There are lots of people that are sixth or seventh generation who continue to try to farm and be an agriculture producer in this valley,” said alfalfa grower Cleave Simpson, who also manages the Rio Grande Water Conservation District. The farming tradition has been passed down for generations. It is a way of life here in the San Luis Valley and a source of pride for many locals.

Today, the local agriculture industry threatens its own future by draining water out of the valley.

A twenty-year drought has forced heavy reliance on the savings account. To combat the drying environment, locals created sub-districts in 2011 to manage water usage in the valley. These subdistricts added onto the 1938 Rio Grande Compact, which was a first attempt at water management. Officials have set a goal to return aquifer water to historical levels by 2030. Sub-district leaders say farmers must comply with restrictions on water usage to operate their wells.

Water levels had been recovering over the first six years of the compact. Simpson said he was hopeful. In 2018, however, drought hit and low winter snow caused a reversal of progress in restoring water to the aquifer.

“We built a whole community, culture, and economy around irrigated agriculture. We did that on a water supply that doesn’t exist anymore,” said Simpson. Water in the valley is still being pumped at a rate that is no longer sustainable due to drought.

Now, Simpson said, he doesn’t know what the future holds.

“I know there’s a realization setting in how the Rio Grande has changed historically and people are grasping that. It’s going to change. We just want to be in the forefront leading that change and not responding to that,” he said. The uncertainty is forcing many farmers to consider a future without farming.

Colorado’s population is projected to double in the next thirty years, and valley leaders are considering what this may mean for their economy. Simpson and his father have explored other crops that require less water than alfalfa, though the dry climate limits what can be grown in the valley. Solar energy has also been suggested.

“Capacity to move energy from solar out of valley is limited,” said Simpson. Though solar may sound like a good option because the valley receives year-round sunshine, leaders say the valley’s isolation may keep solar from becoming the next booming industry.

Today, farmers are grappling with the valley’s uncertain future. For many, agriculture is all they have ever known. Simpson said many farmers do not know if their children will be able to continue this tradition.

“We either need to change our habits and our culture or we’re just going to have to adapt to a changing climatic condition,” he said. A dramatic shift away from farming would be devastating for locals. The San Luis Valley already ranks as one of the poorest parts of the state.

Now, residents say they are in a race against time to save their industry and livelihoods.