SUMMITVILLE – The massive scar gouged into the side of a mountain on the western rim of the San Luis Valley is an environmental disaster that will cost  Colorado taxpayers $2 million a year indefinitely.

In the 1980s, a subsidiary of Galactic Resources Ltd., Summitville Consolidated Mining Company, Inc. established a massive open-pit gold mine. Cyanide used to extract gold and silver from ore began spilling into the watershed of the Alamosa River in the early 1990s. Mine wastewater also spread heavy metals into the watershed, said officials at Summitville.

Facing a cease and desist order from the state government, Galactic Resources declared bankruptcy in the spring of 1992. Within two weeks and emergency response unit form the Environmental Protection Agency arrived.

Two decades later, sitting at 11,500 feet, an $18 million one-of-a-kind wastewater treatment plant is all that stops an unchecked flow of heavy metals and acidic runoff from entering the watershed, Mark Rudolph said during a recent Colorado College tour. Rudolph works for the Colorado Department of Public Health and Environment and oversees the Summitville Mine Superfund site. 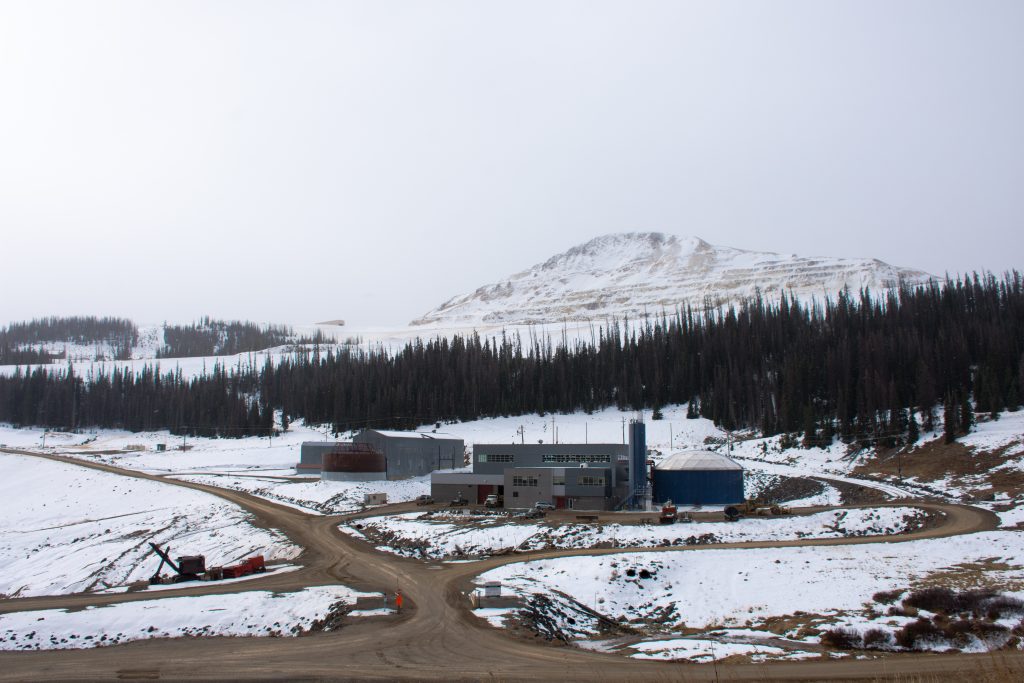 The Summitville water treatment plant. The mine cut can be seen in the background. PHOTO Nick Penzel

“We’re obligated to maintain what the remedy is, so that’s treating acid mine drainage and water conveyances across the site,”  Rudolph said.

Water pumped into the plant is acidic. Lime neutralizes that wastewater. Then presses and filters remove heavy metals from sludge. The remaining slurry of metals and sediment can then be buried on site.

All this comes at a cost. Beyond the $300 million spent initially, Colorado taxpayers must pay $2 million a year to continue water-cleaning operations.

“We’re hoping that… we’re going to find a new technology,” said Rudolph, who also oversees the Gold King Mine cleanup for the state. He would like to see a more cost-effective method put in place, but when pushed he said that there is nothing he knows of that could replace the current technology. Popular cost-effective methods like permeable reactive barriers won’t work at Summitville because of the high volume of drainage water, said Rudolph.

Workers at the wastewater plant aren’t the only people who are in the Summitville area.

On the hill the across from the Superfund site, a construction crew lowers a pit toilet into place­­. The historical and recreational tourism reentering the area means more and more people visiting the mine site and the surrounding alpine tundra.

There’s potential for a skiing operation using existing infrastructure, Rudolph said. He also sees the potential for education. “It would be a great place for a geology camp,” he said.

But the site still exists as a burden on the local and state government as a toxic legacy of mining by a corporation that went bankrupt.

For workers at Summitville dealing with the mess left behind is a is a big job, Rudolph said.

“Is $300 million enough, with an ongoing $2 million a year forever? At what extent is clean, clean?”