There are about 2,250 toxic mine sites in Colorado, according to Mark Rudolph, project manager at the Summitville Mine Superfund cleanup site. These toxic waste-emitting mines have degraded landscapes throughout the state, but the EPA’s Superfund program has proved effective in remediating these sites and giving them new futures.

At Summitville, mine operators poured liquid cyanide over rock to percolate down and extract gold and silver, Rudolph said. Although there was a liner underneath the cyanide ponds, Galactic Inc., the company that ran the mine, became unable to control the water leaking from these cyanide deposits and went bankrupt in 1991.

Galactic left it up to the Environmental Protection Agency to fix the mess, he said. Within two weeks, an EPA emergency response team went to the site to plan a remediation of the mine and restore the ecosystem.

All of the reclamation work at the Summitville Mine is done, Rudolph said during a recent Colorado College visit. The site hasn’t seen unclean discharge in four years, he said. Workers from the EPA used mushroom compost to neutralize the acidity of the soil, he said. 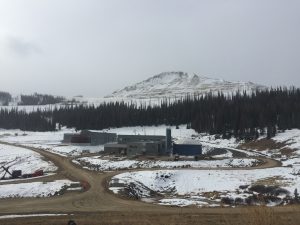 An $18 million water treatment plant was at the Summitville site, and will be for the foreseeable future. But Rudolph has been coordinating with Rio Grande County Commissioner Karla Shriver for future uses of the site.

A modest ski area, a summer geology camp, and hiking trails are among the possibilities Rudolph mentioned. Today, it’s hard to tell that the land previously was home to an open-pit mine. All of the cyanide waste is sealed and buried underground.

“I value nature, and I feel this is something I can do that I respect for what my whole being is,” said Rudolph.

There are other environmental disaster sites. Five hours northeast of Summitville is the Rocky Mountain Arsenal National Wildlife Refuge, 16,000 acres northeast of Denver, sits on land that was previously home to a chemical weapons facility and then leased for chemical production.

DDT and nerve gas were among the chemicals produced on this land. At this site, the overseers dumped chemical waste into unlined disposal basins. Water evaporated and contaminated the surrounding soil.

Clean up by the EPA and Shell Chemical Co. started in 1987. The chemical plants were torn down and capped with asphalt. Then 60 feet of soil grew overtop and natural vegetation was established.

In 1992, the National Wildlife Federation lobbied Congress to designate the land as a national wildlife refuge.

The cleanup was officially finished in 2012. Now the refuge managers expect to have up to a year, said David Lucas, refuge manager.

The refuge boasts one third of the world’s wild population of black-footed ferrets, Lucas said. It is also home to bison, deer, prairie dogs, coyotes, and other mammals.

The urban wildlife refuge has a strong community outreach initiative, particularly aimed at young kids, said Lucas. “Kids want to access the outdoors unstructured,” he said, “and they’ll be the ones to vote to conserve lands in the future.”