I think that one of the most interesting aspects of the Hollywood job culture is the way in which connections are made. We’ve heard first hand about this culture from our experiences at CAA, the DGA, and many others, as well as through some of my own experiences I’ve while out on the town with my classmates. Perhaps the best example of the culture’s uniqueness is the concept of blacklisting. In most job markets, if you happen to piss off those in your job network you can, in the worst case scenario, try to restart in another town. But Hollywood is unique in that if you want to be in on the big business pictures, you have to be in Hollywood. This atmosphere produces an odd dynamic where everyone who is highly successful is also by default irreplaceable. That dynamic, as we heard in the DGA student open house, gives way to scenarios where an actress can be incredibly rude to a director or where a person can be someone who creates an idea for a show and then can have the creative control stolen from him.

While we were at CAA, it was also apparent how important connections are and how progression is based not on past experience but on your work on the job itself. To progress at CAA, the majority of what you need to do is grunt work in the mail room or as an assistant and hope that your work is recognized. Ted Miller is an excellent example of this in the way that he worked his way up at CAA. The preexisting experience he had in the banking business didn’t translate to a higher starting position at CAA because, like previously mentioned, your relationships and work ethic are more important than any resume.

But there is an upside to this culture– if you really spread yourself out, you can create a network truly more powerful than any resume. We’ve seen this with most of the alumni we’ve met in addition to some experiences I’ve had meeting people. I am interested playing music professionally in LA, and from the people I’ve met, it seems like there are a myriad of labels to help young people find their market of listeners. So yes, this city is huge but if you have the right network, there will always be work.

There are two major technological advances within the history of film as a medium– the ability of film to be synced with sound (The Jazz Singer, 1927) and the advent of Technicolor (roughly 1917, through the 2-color process). In my opinion, these two transitions in early Hollywood are the most significant because nearly every other film is built off its ability to carry out these two methods fluidly and crisply, even through the advent of computer-generated graphics.

In addition to the technological issues concerning these two transitions, it also proved difficult for all those involved within the production in front of and behind the camera, namely the actors. The introduction of sound, for example, proved immediately difficult for the actors because it asked them to produce more real-life aspects of their performance in less than realistic filming situations. Every movement, unlike the silent days, had to be choreographed with constant attention to sound, and therefore led to increased chances of error while filming. Likewise, the entire set had to be silent, including movements of the grip and special care had to be taken to make sure the loud cameras were housed in such a way that they were silent by camera boxes. Instead of the introduction of sound expanding the capabilities of filmmaking, it was often limited by the bulky gear used to capture that sound. Therefore, many films consisted of “stage” musical numbers that were static shots.

Color’s influence on early film was extremely well received, yet also proved to limiting in both production and significantly limiting in post-production. Within production, a large number of lights had to be used to penetrate the filters used to split the early red/green color film. This technology also led to more static sets due to the number of lights necessary. Post-production, the process of reproducing color prints and sending out dailies proved too demanding for the companies that held the patents on the color formulas, namely Technicolor. There are many more difficulties with these two transitions that were solved with technological advances; however, the demand by audiences for the recently found magic of color and sound often seemed to slow down these advances. 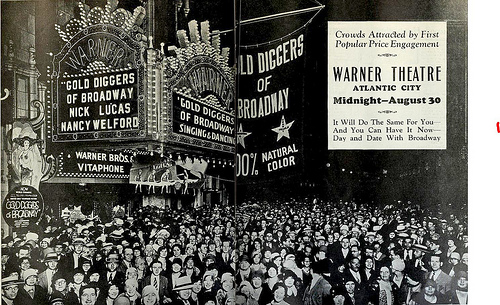