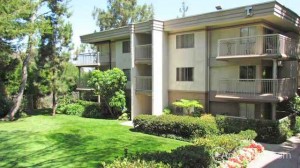 Today was the last day of the Hollywood class. It’s probably the sleep deprivation, but it’s hard to process everything we learned in the class, as well as the fact that it’s now over. Amidst the stand-still traffic and schmoozing with stars, I’ll be sure to miss the Oakwood, funnily enough. Today I said goodbye to Margo, an elderly woman I run into who has lived in the Oakwood for over forty years. The Oakwood has been an important presence on our trip.

The first day I arrived at the Oakwood, I mentally prepared myself to get lost on a daily basis, which I did. The complex is massive, with over one thousand apartments spread between buildings A-Z. I also realized that my main means of transportation would consist of hitching rides on the ubiquitous golf carts. My second day I people-watched and divided the Oakwood residents into the categories of child actors,  parents of child actors, and mysterious other.  By my third day of the Oakwood, I had attended a wellness lecture on avoiding the turkey neck, Sunday brunch, and a casting information session for child actors. Since then, I have been running into oodles of people who, upon hearing of my temporary residence, exclaim: “Oh yeah, the Oakwood! I stayed there!” What is this place?

Yesterday, I decided to ask Olivia, from the Activities department, more about the Oakwood. She told me that the Oakwood was founded in the ‘60s as a form of corporate housing, then gained a reputation for being a haven for swingin’ singles. In the late ‘80s, early ‘90s, the Oakwood reframed their image to cater toward child actors. They created an environment in which they brought in professionals rather than having families scatter out to try to find their own. 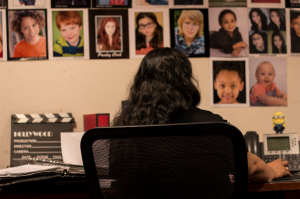 (Olivia working in her office. She has helped our class out a lot and is camera shy.)

Olivia’s wall features photographs of famous child actors who stayed at the Oakwood: Miley Cyrus, Jessica Biel, Frankie Munoz, and more. Rumor has it that Jay Leno often roamed the Oakwood, coaxing unsuspecting residents to participate in his TV show.  But it’s not just actors who come to the Oakwood. While jacuzzi-ing and swimming, I have run into people from all over: a physical therapy student from Saudi Arabia, a jewelry maker from the South, and no dearth of aspiring directors-writers-producers. And then there’s us, a class of thirteen Colorado College students. Who knows what we’ll be, who knows where we’ll be, but maybe one day in our wildest dreams we too shall get featured on Olivia’s wall.

Recurring themes in our Hollywood class include censorship, changes in technology, and old white men. A less touched upon theme of this class has been the subtle presence of homosexuality. Even though Hollywood films have for the large part of the twentieth century been very conservative, homosexuality couldn’t be closeted in Hollywood, just like it can’t be closeted in real life (The Celluloid Closet 1995). Many of the films we watched — Rebecca, Lawrence of Arabia, Steamboat Bill Jr., The Children’s Hour, and Rebel Without a Cause — addressed homosexuality on a spectrum of implicitly to explicitly. I decided to watch The Celluloid Closet (1995), a documentary on a timeline of Hollywood’s depiction of homosexuality, to help me understand our films in the context of their times.

Early Hollywood cinema at times openly portrayed a homosexual relationship. For example, Wings (1927) shows a passionate kiss between two men. However, early Hollywood also punished the aura of homosexuality within effeminate behavior, i.e. the “sissy”, the subliminal homosexual who makes men feel more manly and women more womanly. In Steamboat Billy a running joke is that Buster Keaton’s character (in the immortal words of Mean Girls) is “too gay to function”. He’s not actually gay, but his puffy pants, ukelele, and habit of signaling his lapel flower to men indicate that he might be. To put everyone in the film and the audience at ease, he is straight-washed of his moustache, beret, and instrument.

With the Hays Code, references to homosexuality had to be closeted. Apparently, because homosexuality was so subtly included within the Hays days, the dodo bird censors couldn’t pick up on it. This period also led to the emergence of the “obsesive psycho homosexual”: Rebecca (1940) and Rebel Without a Cause (1955) both feature this archetype. In Rebecca it’s the malevolent Mrs. Danvers aka Danny. She is rightfully creepy, popping up unexpectedly, unsmilingly, and androgynously. She is obsessed with Rebecca and preserving Rebecca’s memory. We met with the feminist Hitchcock critic, Tania Modleski, who had us read the end of the novel as compared with the book. In the novel, Danny burns Manderley and then runs off; in the film she burns up in Manderley like a witch on a stake. Similarly to Mrs. Danvers, Plato’s character is portrayed as freaky. The first time we meet him is in juvenile hall after he shot puppies. His obsession with Jim is a result of daddy issues, i.e. his love of Jim stems from the same sickness that caused him to shoot puppies. He also dies at the end. Another case of “the only good homosexual…”

Another depiction of homosexuality is that of an incurable curse. The Children’s Hour (1961) was a film that weakened the Hays code by breaking the last taboo: openly depicting a lesbian woman. However, it depicted her in the light of irreconcilable guilt. The film focuses on the homophobia that Karen and Martha experience for being rumored lesbians: they lose their school, their reputation, and Karen loses her fiancé. Martha cannot deal with the guilt of being lesbian and (spoiler alert) hangs herself. In an interview in The Celluloid Closet, Shirley McClaine says she wishes she had portrayed Martha differently: as a woman who fights to embrace her identity.

The end of the Hays Code was not the end of self-censorship. Lawrence of Arabia (1962) depicts glimpses of a homoerotic relationship between Lawrence and Sherif Ali. (It also offers hints of sado-masochism just years after SM became an organized community among male World War II veterans.) However, while we see Ali’s hands going over Lawrence’s back, we do not see anything more explicit.

Perhaps the audience wasn’t ready for it. However, as The Celluloid Closet concludes, studio executives are more conservative than their audiences. They fear the audience will boycott the film and lose them money and their jobs. Therefore, they might argue that it’s best to give the audience the stereotypes of or lack of homosexuality they are used to. However, their catering to the audience’s desire not only closets, but also disfigures representations of people with non-mainstream sexual preferences. As was repeated over and over again in The Celluloid Closet, Hollywood shapes how people think they should act, and how they act toward people who deviate from the norm. Although it is important that homosexuality has been portrayed in films, however subtly, throughout the twentieth century, now is the time for homosexuality to be portrayed openly, in a way that humanizes and de-pathologizes homosexual figures.