CRESTONE– Colorado’s ceaseless efforts to get people outdoors and develop a recreation industry may be ruining ecosystems.

If ecosystems collapse, Canaly argued in a recent interview, then both humans and other wildlife will be hurt.

For 18 years, Canaly has run SLVEC, a grassroots group devoted to preserving public lands, and helped pass legislation to preserve many areas around the San Luis Valley.

The problem lies in the convoluted motive for preservation: People fight to preserve natural areas primarily because they want to use them for recreational purposes. More people visiting natural areas often means erosion of paths and trampling down of grasses to form social trails.

For example, the San Luis Valley Development Resources Group implemented a program called SLV Great Outdoors. The program strives to get more people outdoors by engaging locals and tourists. The group’s goal is to find a balance between conservation and recreation. They do so by trail building in order to limit human impact while making natural areas accessible. They also conduct public ‘education’ for beginners.

She points to the growing number of mountain bikers rolling over fragile terrain.

As the mountain biking community grows, members of the MTB (mountain biking) project are beginning to push for more trails in wilderness areas of the San Luis Valley.

Land managers statewide are grappling with the problem of more people flocking outdoors to engage in recreational activities on fragile pieces of land.

At Rocky Mountain Arsenal National Wildlife Refuge just north of Denver, the number of visitors has increased from 23,000 in 2012 to over 400,000 in 2017, according to refuge data.

The increase in visitors builds a constituency to for conservation.

“These people are the ones that are going to vote to protect these places,” said David Lucas, manager of the refuge. Lucas is aware of how powerful having a connection to a piece of land can be and thus, supports bringing more visitors to the refuge.

Employees of the refuge lead many programs directed at people from surrounding city neighborhoods, teaching them about the land in an attempt to foster an appreciation for it.

But as visitors increase, it’s the species on the revitalized land of the refuge that suffer, said Lucas. The refuge is home to 230 animal species including the black ferret, a keystone species, and a herd of bison.

Nowhere can the fervor for the outdoors be seen more than on a snowy Sunday at REI, an outdoor equipment company. As snow piles up outside, people of all ages rush around inside, searching for the best deal on winter coats.

REI is growing, according to Chris Condie, manager retail salesman at the Colorado Springs location. Programs at REI such as Opt Outside aim to get people of all demographics to explore their local wilderness areas. Each program teaches Leave No Trace, a set of principles meant to minimize human impact on ecosystems.

“In order to really enjoy wilderness, you have to get out in it,” said Condie.

In contrast to human-centric businesses like REI, groups of grassroots activists strive to keep some areas of wilderness free from human impact.

“There are areas human beings shouldn’t even go to certain times of the year,” said Canaly passionately. She used forested areas home to diverse bird species in the spring as an example.

There is an irony in getting people to go outside to gain more support for conservation, only to have them ruin the land in the process.

Some people, such as Canaly, believe dramatic action is necessary in order to create noticeable change:

“We have to stop manipulating resources and thinking it’s going to be okay.” 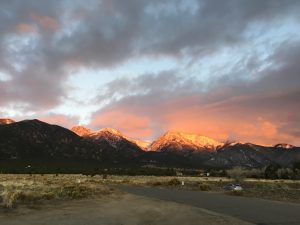 The sun sets behind the mountains of the San Luis Valley.