DENVER– The South Platte River is a critical resource in the Denver area over the past 50 years it has endured massive change development and abuse.

But fishing groups, the Greenway Foundation and water users say they are committed to restoring natural processes.

The Chatfield Reservoir built in response to a massive flood which deluged Denver in 1965, holds water that could be released to simulate fluctuating flows.

The Greenway Foundation encourages such efforts.  Since 1974, foundation leaders have pushed for cleanup of the South Platte. Ryan Aid development director for the foundation, helps raise money for projects.  He advocates for increasing the quality and quantity water in the river as it flows through metro Denver.

“The outdoor lifestyle that the river supplies. The lifeline the river provides to the city is the emotional and personal connection I have to the river,” Aid said.

Trout were stocked during the past year, he said, by Trout Unlimited volunteers. Trout now are not only surviving but thriving, Aid said.

The biggest challenge to creating a better environment for trout is improving low water flows.

There are signs of life. The South Platte holds ducks, mostly mallards. These ducks swam in man-made rapids. They still must dodge trash. In central Denver pavement encroaches on river banks.

Scott, 54-year-old fisherman loading his gear after camping at the Chatfield Reservoir camp site has spent his entire life in the Denver area. He has observed the South Platte transition from natural to pavement.

A new lifestyle is being adopted.

Due to development and an increasing population, people do not have as much trust leaving their children to discover and play alongside the river.

Scott talks about when he was a child, he would be pulled by a truck on an innertube through the snow or left to discover the river on his own.

“The area is becoming more populated and it is bringing in more creeps,” he added.

The South Platte has emerged as an area for recreation, he said. River banks during summer months are packed with kayakers and people on flossy tubes. Fewer families walk along the river, he said.

“When I was younger there used to be herds of hundreds of antelopes. All around here. You would see buck deer. You don’t see it anymore. It was a pretty wild place. The Raccoons live in the sewers now,” he said.

At the Chatfield Reservoir an elderly Ukrainian immigrant sat on a portable chair holding his fishing rod. His net held two large rainbow trout kept fresh in the water while he tried to catch more on spin gear.  Other fisherman on the reservoir acted as if they were escaping from a booming city, savoring tranquility.

Change is inevitable. It is evident that in the past 50 years the South Platte has transitioned from a natural environment into a manmade recreational site, wildlife is simply an afterthought. 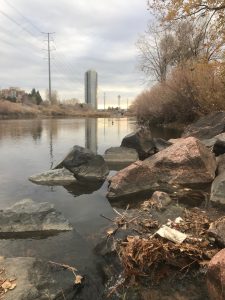 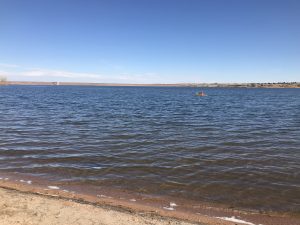