After 25 years of cleanup and remediation, it became a national wildlife refuge.

Today, the U.S. Fish and Wildlife Service tests pesticides on the refuge for Bayer AG, one of the largest pharmaceutical corporations in the world.

“It’s one of those interesting ironies,” said David Lucas, manger of Rocky Mountain Arsenal National Wildlife Refuge (RMANWR). “We spent billions of dollars and cleaned up one chemical. Now, we’re spraying a different one.” 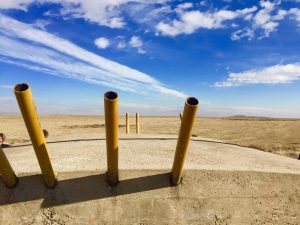 The refuge covers about 15,000 acres of flat, golden plain. Scraggly tumbleweeds roll by prairie dogs, standing alert by their upturned mounds of earth. Long cattails sway in the wetlands and skeleton-like cottonwoods grow beside the creeks and lakes. Brown-haired bison roam the landscape.

In the distance—ten miles away—the Denver city skyline juts into the horizon, and a white cloud billows out from the smokestack of an oil refinery.

In its first forty years, the Rocky Mountain Arsenal pumped out synthetic products. The army made nerve agents, mustard gas, and rocket propellants. In 1952, Shell Chemical Company leased some of its facilities. They produced DDT – a toxic pesticide that later spurred environmentalist Rachel Carson to write the book Silent Spring.

In the 1980’s, the U.S. Environmental Protection Agency (EPA) began investigating the arsenal. Due to the concern of chemical contamination, the government listed it as a Superfund site.

The U.S. Fish and Wildlife Service oversees the refuge. Eleven staff members battle to restore the prairie to as close to its natural state as possible. They manage controlled burns, mow the grasses, and keep an eye on the grazing bison.

Yet invasive weeds creep up from the soil. A small plant known as cheatgrass is the most damaging and difficult. It grows early and quickly in the season—the perfect kindling for wildfires. 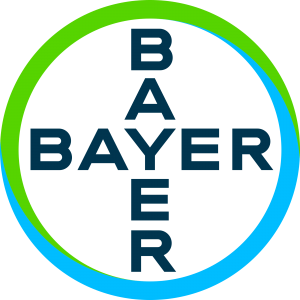 This is where Bayer steps in.

RMANWR and Bayer formed a partnership: The company would provide new, expensive chemicals that target cheatgrass. The product would be tested on refuge land.

“You’re testing a chemical. You really want to throw it in the most native, pristine, wildest prairie that exists on the planet? Probably not. So now we can test large plots here for them, and get the results we want,” said Lucas.

The herbicide they use is called Esplanade. It’s approved by the EPA.

Still, its label is a bit startling.

“This product is toxic to fish, aquatic invertebrates, and plants,” it reads. “This product may impact water through spray drift or runoff.” 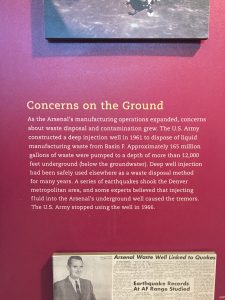 In excess, every chemical is toxic.

Workers at RMANWR follow Bayer’s instructions on Esplanade. They don’t use much of it, according to Lucas—not compared to the agricultural industry.

They also spray glyphosate. Its commercial name is “Round Up,” a chemical made by Monsanto—the company that Bayer acquired this year.

In recent months, a groundskeeper at a school in California sued Monsanto. He claimed glyphosate gave him cancer. Monsanto paid him $239 million in a settlement.

“Do I consider them the evil empire? No, I don’t,” said Lucas. “Industry is part of the network we work with.”

Hundreds of species live on the Rocky Mountain Arsenal National Wildlife Refuge: Black-footed ferrets, coyotes, wood ducks, northern pintails, rabbitbrush, and sand bluestem, among many others. As much as they would like to, Lucas and his crew can’t manage everything. They do their best to conserve the environment. That’s their goal.

“We’re out here fighting weeds with today’s chemicals,” Lucas said. “Is it the right answer?…That’s a good question. I don’t know.”