If you have money, you aren’t supposed to buy more—you’re supposed to buy better. In an era when plastics threaten the environment, beverage drinkers are asked to find alternative straws. When the agricultural industry threatens global warming, wealthy millennials buy vegan products from Whole Foods. For some companies, like Patagonia and REI, social and environmental responsibility has become central to their brand.

But for many Americans, the health of the environment—or even their own physical health—can’t be a priority when they shop. Low-income consumers don’t have many options.

Take a look at the dollar store industry. 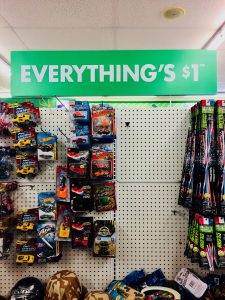 Companies like Dollar Tree and Dollar General—two of the largest deep-discount retailers in the country—mainly serve low-income neighborhoods. Around 42% of the people who shop in these bargain stores make less than $30,000 a year, according to a 2015 report by the Campaign for Healthier Solutions (CHS), an environmental justice advocacy group.

It’s a booming business model. There are more Dollar Trees than Walmarts—and they raked in a total of $22.8 billion in 2018.

“It’s peace of mind,” Colorado Springs resident Courtney Lupo said, as she reached for a pair of fuzzy, winter gloves on the shelf. “You don’t have to look at prices and compare, or think of your budget.”

It’s easy to see dollar stores as an emblem of poverty: Cheap, off-brand products. Potato chips, candy, and canned food. Customers who sometimes fill their red shopping carts to the brim because each item is affordable—yet whom are unaware of the environmental impacts of consumption, like ecological degradation, fossil fuel emissions, and depletion of natural resources, as a report by the United Nations explains.

On a blustery, snowy November morning at the Dollar Tree on Uintah Street in Colorado Springs, one woman spent $170 on Christmas decorations. When everything is cheap, overconsumption is easy.

Dollar stores can seem like the dirty, unhealthy shops for America’s worst off. 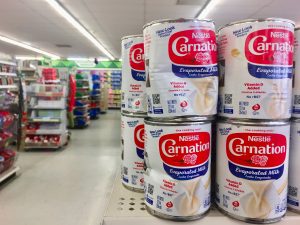 And they are, in some ways. In fact, dollar stores contribute to environmental injustice. Because they pop up in predominately low-income, communities of color, shops like Dollar Tree disproportionately affect the people living there.

Dollar stores are toxic, according to research by the CHS.

CHS tested a sample of 164 products from four dollar store chains. Out of their selection, 81% of the items contained at least one chemical above government, corporate, and third party standards. Among the chemicals were lead, PVC (vinyl), and phthalates (known to be endocrine-disruptors). Many of the chemicals were found in children’s toys.

The story of toxic contamination in marginalized communities is not uncommon.

One study, in the Public of Library Science (PLOS) One journal, concluded how more low-income, nonwhite communities—specifically children and the elderly—breathe in air polluted with nitrogen dioxide.

Another 2018 national study in the journal of Environment Research found black, Hispanic, and low-income students to face more exposure to dangerous neurotoxins. 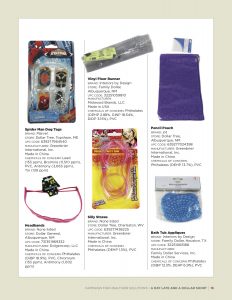 Dollar stores are a double-edged sword. They might be harmful to the environment and human health, but they’re also the only option for people who can’t pay any more for their groceries, clothes, or baby products.

“It’s cheap,” said Hannah, a sophomore at William J. Palmer High School. She pushed her niece in a stroller, bundled up in a warm jacket and knit hat.

Dollar stores give options to people—and shoppers and employees can get to know one another.

“We’ve been coming here since 2011,” said Mah, a nurse from Senegal. “It’s like a family store.” The Senegalese woman wore a royal blue head wrap and a thick, green and brown woven shawl. She came with her husband, Samuel, who roamed the store with a shopping basket in hand.

“Women—you have the power,” Samuel said, looking over at his wife as she browsed a shelf of winter scarves. Samuel studies French at Pikes Peak Community College, and works as a soccer referee. Together, the couple has two kids. 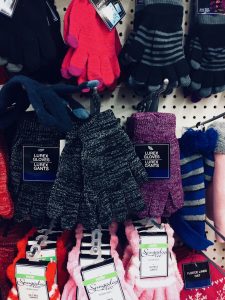 “We don’t have a lot of money,” said Mah. She navigated the store with ease, turning down each fluorescent-lit aisle with the confidence of a regular. The empty cardboard boxes piled in lopsided towers and the jammed, colorful shelves stacked with hundreds of different products didn’t slow her down. She said she likes going to Dollar Tree because she knows where everything is.

“Anyone came to this life will be fed and be taken care of,” said Samuel.

“I do it every day because I have to,” said Ashley, freight manager at the store. “Some days it’s a struggle.”

Ashley has two sons. Her oldest, eight years old, wants to be a doctor.

Ashley oversees the trucks that bring in heavy shipments. When loads are dropped off, she wheels in boxes from the back storage room. Her staff quickly restocks the shelves—their quota is 25 cases per hour. Ashley walks through the aisles, making sure everyone is on task.

“It can be really frustrating and challenging at times,” Ashley said. “You’re a girl. And this is heavy,” she said. “We can lift the same stuff as guys can.”

For Nicole, a cashier position at Dollar Tree was her best option. She recently broke her lease on an apartment in the east side of Colorado Springs. “I was surrounded by Mexican gangs,” she said. The danger got to be too much.

She needed money. She also needed a job within walking distance of her home—and Dollar Tree was the only one to take her.

It hasn’t always been a safe job, though.

“We’ve had two people kind of get mad at us for no reason,” explained Ashley.

One time, a man stole items from the store. The manager went out to confront him. The robber pulled out a machete.

Otherwise, it was quiet in the store. Customers filtered through the checkout line. The cash register clanged open as Nicole rung up everyone’s purchases. “Have a good one,” she said.

A mother shuffled to the exit with her toddler. Before leaving, a Dollar Tree employee rushed over with a shiny, black and red Spiderman balloon. She handed it to the little boy.

“Thank you so much,” said the mother. She pushed open the door. A green, “Everything’s $1” sign glowed beside them. As they stepped out into the parking lot, snowflakes swept around them. The road had turned to slush and the cars were hugged in a coating of white.

The little boy held on tight to his new balloon.