COLORADO – Rivers in the West are drying up, and increased incentives for conservation may be the natural next step.

Droughts can have dire ecological and economic effects. This would threaten Colorado’s wildlife, ecosystems, and be detrimental to the health and agricultural practices of people throughout the Western states.

Recently, farmers in Colorado’s San Luis Valley who depend on the Rio Grande River began voluntarily reducing their pumping from an over pumped aquifer. The valley “is based 100 percent on irrigated agriculture from a water supply that doesn’t exist anymore,” said Cleave Simpson, an alfalfa farmer in the valley who also serves as manager of the Rio Grande Water Conservation District.

There have been efforts to implement more water-efficient appliances and moves towards drip irrigation, according to Western Resource Advocates, but it may not be enough to accommodate the Wests’ growing population.

The Rio Grande River is at an all-time low, and some conservation advocates are less than sympathetic. “The farmers are the ones draining it,” said Gary Wockner, executive director of the nonprofit Save the Colorado.

Farmers own all of the water, and “what they decide to do with it is their business,” he said. “But don’t use the word ‘crisis’ just because the farmers aren’t able to drain the river as much as they want,” he said.

Wockner said he started Save the Colorado because no other groups were fighting to stop dams and diversions in order to promote the free flow of the Colorado River.

The Glen Canyon Dam has terribly degraded the Grand Canyon, Wockner said. He argued in a recent opinion piece in the Denver Post that elected leaders “think pouring more concrete and building more storage structures will result in more water.” But there won’t be any new water to fill these facilities because of climate change, Wockner said.

Instead of continuing the pattern of tapping Western rivers by installing dams and diversions, Wockner contends people should focus on water conservation. 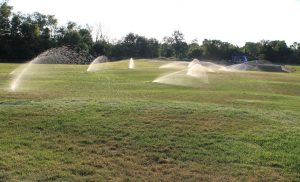 Outdoor water use accounts for about 55 percent of residential water use in the Front Range urban area, most of which is used to irrigate lawns, according to a study by Colorado State University on water conservation in and around the home.

“It’s an enormous source of potentially conserved water that’s being used just to keep the grass green for three months out of the year,” Wockner said.

Different states have been implementing programs to bolster water conservation, but Colorado seems to be behind the game, said Wockner.

Cities across the southwest, notably Los Angeles, have been implementing “Cash for Grass” rebate programs where local governments are paying people to get rid of their water-intensive grass, said Wockner.

Los Angeles resident Calaya Hudnut said she, remembers her family accepting money from the city in order to take out their grass and create a garden, which required less water. “We had some grass and we took it out to put a garden in,” she said. One of her neighbors replaced grass with gravel and cactus.

Nowhere in Colorado has implemented water conservation initiatives such as these, said Wockner, and aquifers are being tapped excessively. Could new policies to incentivize individual water conservation by Western Rivers’ saving grace?